Ben & Jerry's freezes when it comes to Palestine 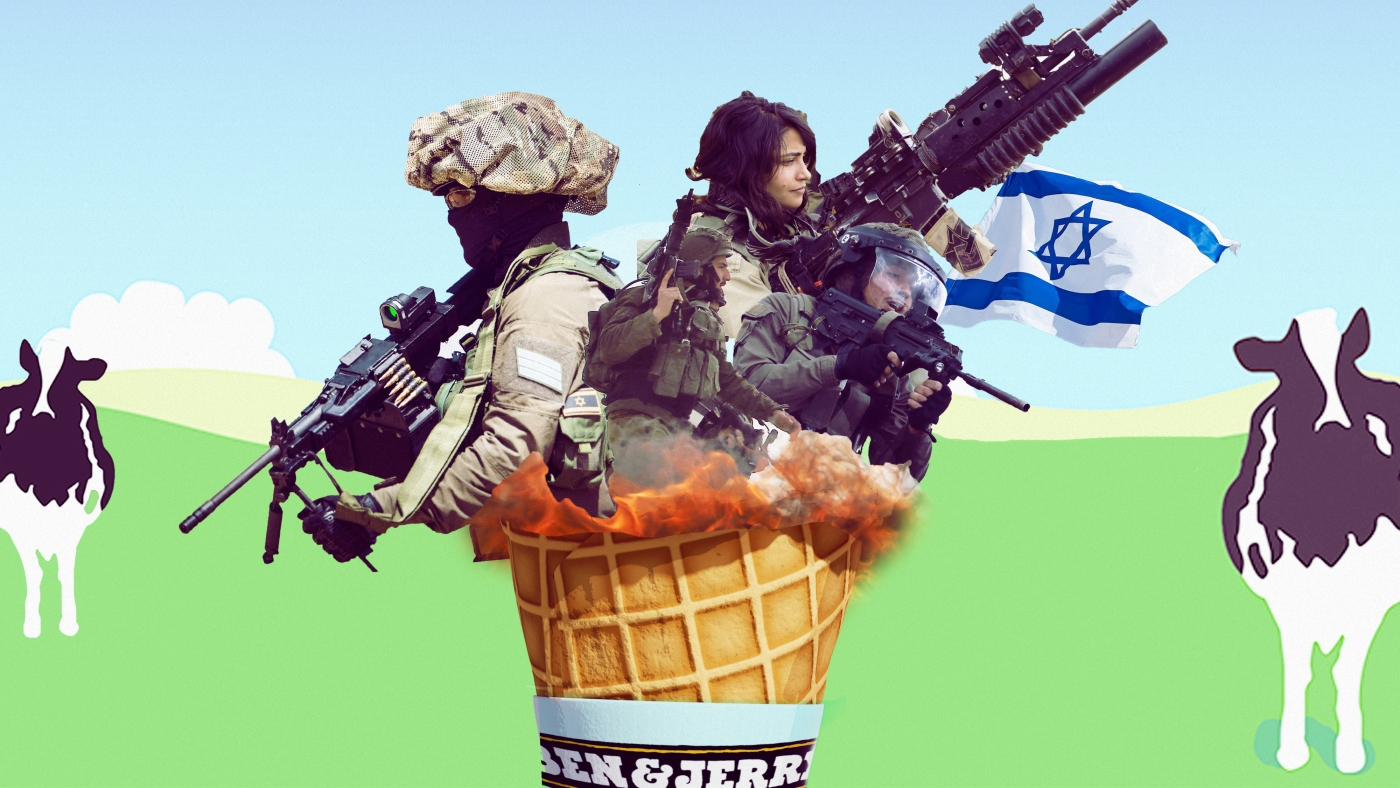 Used to trite, benign communiques of condemnation from corporate America, the statement from Ben & Jerry's floored many in the US with its use of direct language.

"The murder of George Floyd was the result of inhumane police brutality that is perpetuated by a culture of white supremacy," the statement read. "What happened to George Floyd was not the result of a bad apple; it was the predictable consequence of a racist and prejudiced system and culture that has treated Black bodies as the enemy from the beginning.

"What happened to George Floyd in Minneapolis is the fruit borne of toxic seeds planted on the shores of our country in Jamestown in 1619, when the first enslaved men and women arrived on this continent.”

The liberal mainstream lapped it up. CNN called it extraordinary. The Washington Post said it "stands out among tepid corporate America statements".

As remarkable as Ben & Jerry's statement may have been, it also comes as a volley of brands stumble over each other to capitalise on the public outrage. Moreover, as stinging as the Vermont-based ice cream company's statement might be, Ben & Jerry's has been known to freeze when it comes to dealing with major political issues elsewhere.

Case in point: Israel. Ben & Jerry's has conducted business in Israel with a licensee partner since 1987, with a manufacturing facility and two scoop shops they describe as located "outside the occupied territories, just south of Tel Aviv."

Since 2011, the Vermonters for Justice in Palestine (VTJP), a group advocating for Ben & Jerry's to halt their operations in settlements, have been engaging the company.

Thousands of individuals and almost 250 organisations in 20 countries have since urged Ben & Jerry's to stop sales in illegal Israeli settlements and publicly oppose Israel's occupation.

In 2015, the Boycott, Divestment and Sanctions campaign (BDS) called for a boycott of the brand amid its refusal to alter its business practices.

"It's now clear that appealing to Ben & Jerry's socially responsible 'conscience' alone will not achieve our objectives," BDS said in a statement in 2015. 'We can't breathe until we're free': Palestinians stand in solidarity with US protesters
Read More »

The company has still tried to market itself as "committed to its licensee in Israel while continuing to be a voice for positive change and a sensible approach to multicultural understanding and thriving communities."

Still, the company has routinely left out the fact that its ice cream is sold by Shufersal supermarkets in Israeli settlements. Shufersal was listed earlier this year by the UN as one of 112 companies profiting from Israel’s illegal activity and human rights violations in the settlements.

On Wednesday, Ian Stokes, a member of VTJP, told Middle East Eye his organisation had met with and written to Ben & Jerry's several times, but that it wasn't clear if the company was taking their concerns seriously.

"Basically the management and board of directors will listen to us, but not respond with any actions."

"Next week, we have a VTJP meeting; we may decide then whether to challenge them over this latest statement from Ben & Jerry's about racism."

In a response to queries from MEE, Sean Greenwood, director of Ben & Jerry's media team, referred to the company's 2015 statement, adding that the company had nothing more to add at this point.

Ben & Jerry's is known as a company that has spoken out on climate change, the rights of refugees and migrants and the LGBTQ community, as well as for its bold statements in support of the Movement for Black Lives in America since 2016.

But activists say that slamming white supremacy, especially with the Trump administration in the White House, without invoking the rights of Palestinians is hypocritical and short-sighted.

"Corporations like Ben & Jerry's attempt to commodify the Black liberation struggle to capitalize off of this moment without having any real principles behind them," Nerdeen Kiswani, chair of the group Within Our Lifetime, told MEE.

"How can they claim to stand against white supremacy when they continue to fuel it by supporting Israel? Black Lives Matter is not just a slogan, it is standing against the racist supremacist ideologies that oppress and murder Black people every day," Kiswani said.

"Posting is not enough, these companies have to put their money and actions where their mouth is, otherwise it is just disrespectful to both struggles."

Given Trump's support for the annexation of the occupied West Bank and the so-called "deal of the century", Stokes said that it was even more crucial for Ben & Jerry's to divest from Israeli settlements and speak out against the occupation.

"If there's more annexation this will be another 'hot issue' for us to challenge B&J over their support for an apartheid state."

Israel and the occupied Palestinian territories have been gripped by protests of their own after Israeli forces shot and killed Eyad al-Halak, a unarmed autistic 32-year-old Palestinian, outside his special needs school in occupied East Jerusalem's Old City last week.

In Haifa, demonstrators held up signs of other unarmed Palestinians who have been shot dead by Israeli forces, including Razan al-Najjar, a 21-year-old Palestinian paramedic who Israeli forces shot dead during a Great March of Return protest in Gaza in 2018.