Israel's ambassador to Britain is facing mass opposition to a planned speech at the School of Oriental and African Studies later this week, which local student societies described as "an exercise in state propaganda" from a staunch defender of Israel's wars on Palestinians.

More than 100 academics from SOAS were among 150 who wrote to Valerie Amos, its director, in opposition to Mark Regev being given a platform to speak on Thursday.

In a statement, the local branch of the University and College Union, which represents academics, said: "Mark Regev is not an ordinary ambassador but one who as a spokesman for the Israeli government justified Israel's 2006 aggression on Lebanon and its repeated onslaughts on Gaza."

Regev was invited by the SOAS Jewish Society and the Model United Nations Society. He will be interviewed by Eric Heinze, professor of law and humanities at Queen Mary University of London, before taking questions.

The SOAS Students’ Union challenged the university management for agreeing to host the event and said it feared for the safety of Israeli and Palestinian students wanting to "engage freely" in a debate with Regev due to Israel’s anti-boycott law.

The ban, introduced by Israeli politicians last February, can prohibit individuals from entering Israel and the Palestinian territories if they supported calls to boycott Israel, and has especially harmful implications for Palestinians living in Israel and occupied Jerusalem with only temporary residency permits.

But the SOAS Jewish Society, which invited the Israeli ambassador to speak, said it opposed the anti-boycott law and that it was "wiser to challenge and debate" Regev.

"It would be wiser to challenge and debate it with the ambassador as opposed to demonstrating that removing others from engagement is the way forward," it said on Facebook.

Academics and students are expected to protest against Regev's talk at SOAS by holding an "apartheid off-campus" event which will aim to inform students and staff about the situation in Palestine and why they are opposing the ambassador's presence at SOAS.

Paula Sanderson, SOAS's registrar, in an email to students and staff said that the event was "not an invitation from SOAS as an institution".

"SOAS is a place which promotes freedom of debate and has a long tradition of hosting speakers from all over the world," she said.

The Israeli embassy declined to comment to Middle East Eye but the Israeli ambassador on Twitter said he was "looking forward to speaking with students at SOAS".

Looking forward to speaking with students at @SOAS this week. Open discussion crucial for understanding and peace. pic.twitter.com/stFfMeVh0L

There have been no visits by the Israeli ambassador or any diplomats to SOAS since 2005 after its students' union became the first in the country to support the Palestinian Boycott, Divestment and Sanctions (BDS) campaign.

SOAS also became the first British institution to hold a university-wide referendum over joining the academic boycott of Israeli institutions and companies until Israel adheres to international law.

The BDS campaign, which calls on Israel to adhere to international law and end the illegal occupation of both the West Bank and the siege on Gaza, has been garnering support across UK campuses in the last few years.

Regev came to prominence after he was the spokesman for Israeli Prime Minister Benjamin Netanyahu and his staunch defence of Israel's assaults on the Gaza Strip in 2008, 2012 and 2014. 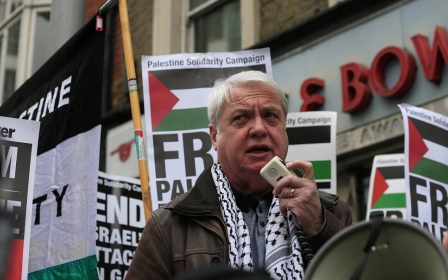