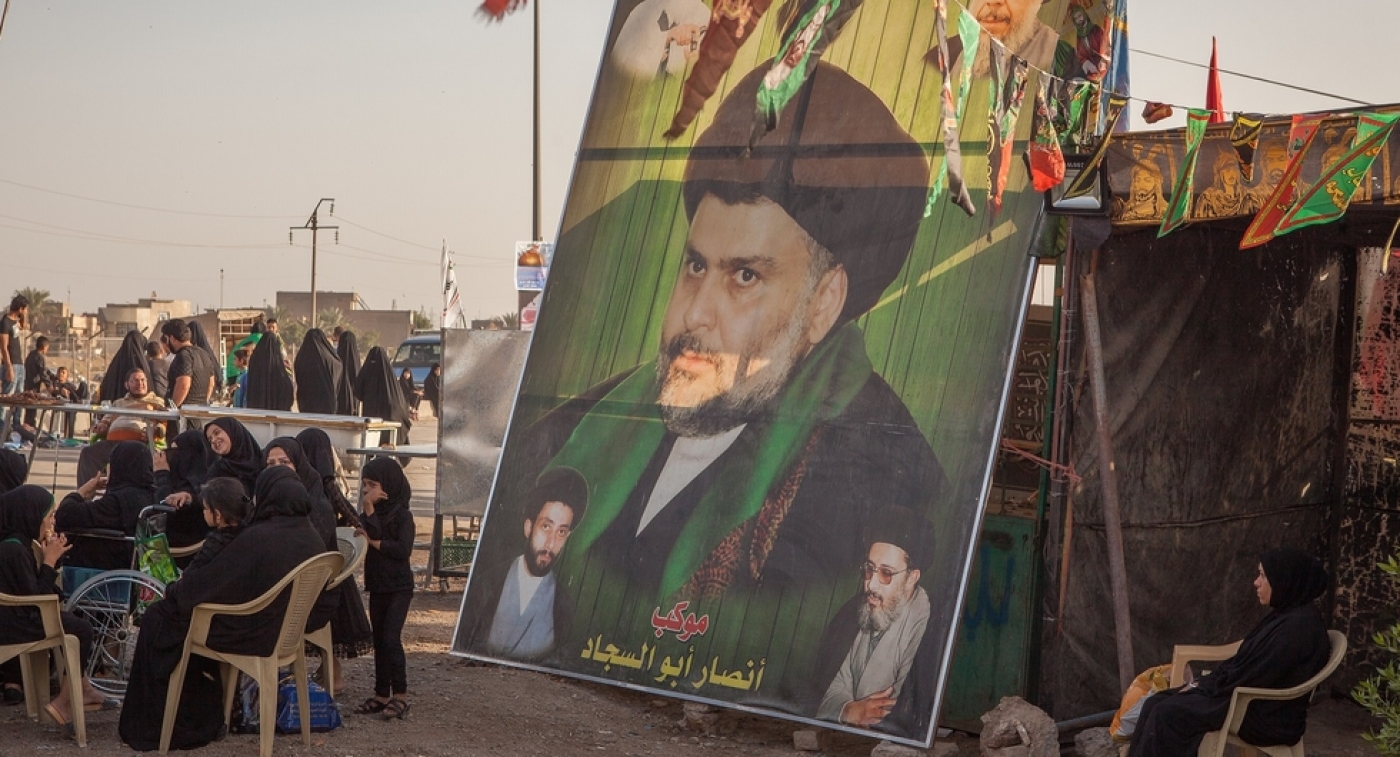 The Iraqi parliamentary elections on 12 May were the first national polls since the defeat of the Islamic State (IS) group in 2017.

The result saw Shia cleric Muqtada al-Sadr's Sairoun Alliance emerge with the largest bloc of seats at 54, although his coalition fell short of a majority in the 329-seat parliament.

On Tuesday, Sadr's Sairoun grouping, which includes the Iraqi Communist Party and other secular groups and individuals, announced a political alliance with Hadi al-Amiri's pro-Iranian Fatih bloc in a bid to form a government.

The elections were marred by violence and fraud, which led the Iraqi parliament to order a vote recount.

In the wake of Sadr's surprise victory, Middle East Eye sat down with Dia al-Asadi, head of Sadr's political office.

MEE: What is your reaction to the Iraqi parliament's call for a partial recount of votes from the 12 May elections?

Dia al-Asadi: I think in every electoral process there is a risk of violations or fraud - you know, meddling in the results. But no matter how large the fraud or violations are, there should be some procedures that should be respected by all. And the normal procedure is to call on the election commission and the federal court.

MEE: Do you think this recount is the result of pressures from abroad?

DA: Well, I think it is not clear whether there is pressure from outside. But people from inside [Iraq] are complaining. When those who lost in the election gather together, they constitute at least a third of the parliament, more than a third. Then they say: "Why don't we get together and pass a law in order to recount the votes?"

The process of recounting is not an easy one. It needs to be covered by legal legislation. And I think there is a conflict of interest. Who guarantees that there will be no fraud in the recounting process? It's going to be done manually, so who guarantees this?

MEE: Why does the word 'nationalism' hold an important place in Muqtada al-Sadr's speeches? Why did Sadr visit Saudi Arabia?

DA: Well, Muqtada al-Sadr’s speeches on Iran are not about boycotting Iran. But he thinks that Iran is a neighbouring country, just like Turkey and Saudi Arabia. And our relationships with our neighbours should depend on how much they have to offer to Iraq, so the more they offer, the more we offer to them. And we should maintain mutual and equal relationships. We should work to strengthen and deepen our ties. But we should never allow neighbouring countries to hold influence over Iraq.

We should work to strengthen and deepen our ties. But we should never allow neighbouring countries to hold influence over Iraq

For a person like Muqtada al-Sadr, to visit Saudi Arabia at this particular time was to send a message that our policy is not determined by our relationship with Iran.

That's why he talks with Saudi Arabia, because Saudi Arabia is a neighbouring country. And he thinks to a certain extent that it has been influential in regional affairs.

Saudi Arabia was very worried about the situation in Iraq [in 2003], because they thought the Shia of Iraq were an extension of the Iranian Shias, and that Iraq would be used to export the Iranian Islamic Revolution to all Arab countries, which is not the case at all. Saudi Arabia thought that all Iraqi Shia speak Farsi, and use Iranian riyals to pay.

So why should our relation with Saudi Arabia be determined by Iran?

DA: At the very same time Muqtada al-Sadr visited Saudi Arabia, there was an escalation in the discourse between Saudi and Iran. People thought, since there is a problem between Saudi Arabia and Iran, the Iraqi Shia are not going to be friends with Saudi Arabia.

For a person like Muqtada al-Sadr to visit Saudi Arabia at this particular time was to send a message that our policy is not determined by our relationship with Iran.

MEE: But Turkey is now in northern Iraq, heading towards areas controlled by the Kurdistan Workers' Party (PKK)?

DA: Muqtada al-Sadr sent a very clear message to the Turkish brothers, telling them that they are our neighbours, they are Muslims, and there is a huge exchange of interest between them and us. So it is very hard for us to take a very harsh decision. Better they review their decisions. Iraq doesn't want to lose them, they are still our neighbour.

Muqtada al-Sadr will resist any occupation of Iraq by military power. So the Turks understood our message, and they have assured us they will work with the Iraqi government in order to solve this problem.

MEE: Nationalist speech is unusual in post-Saddam Iraq. Did you advise him to do it?

DA: We were working on it actually, all of us, but you know it is a project I have adopted. For me, to turn to this civic movement and embrace civic ideas was an objective. It was as I said, a project.

After I joined the Sadrist movement in 1992, I thought that the salvation of all the identities of Iraqi society could be achieved through this movement. I was full of confidence that this movement could be fruitful and have an impact on the future of Iraq.

When I joined the political process, I never shied away from expressing my ideas - I said that openly. There are so many interviews that go back to 2011, for example, in which I talk about the necessity of leaving religious and sectarian discourses and go for a nationalist discourse, to work with others in order to achieve this.

Muqtada al-Sadr himself is from a family with nationalist views, and he immediately welcomes grievances from his followers. When we discuss ideas with him, he immediately embraces this.

But the problem came later, perhaps. Because his opinions are seen by Western media as holding a violent position against foreign powers in Iraq. But he himself says that anyone in his place, let's say in France or Italy, when they see their country occupied, would have no other choice than resistance.

That's why Muqtada al-Sadr was demonised in Western media.

Stereotype were used by Western media. This blinded them to the fact that Muqtada al-Sadr was one of the most nationalist leaders in the country. And surprisingly for observers outside of Iraq, he developed a position that is very strongly against Iranian intervention.

MEE: Why did Muqtada al-Sadr refuse to run for the election himself?

Muqtada al-Sadr believes that if a religious person wants to join politics, he has to take off the turban and the religious costume, so that people will not be cheated that this person represent religion.

MEE: What role does Muqtada al-Sadr want to play in the future of Iraq?