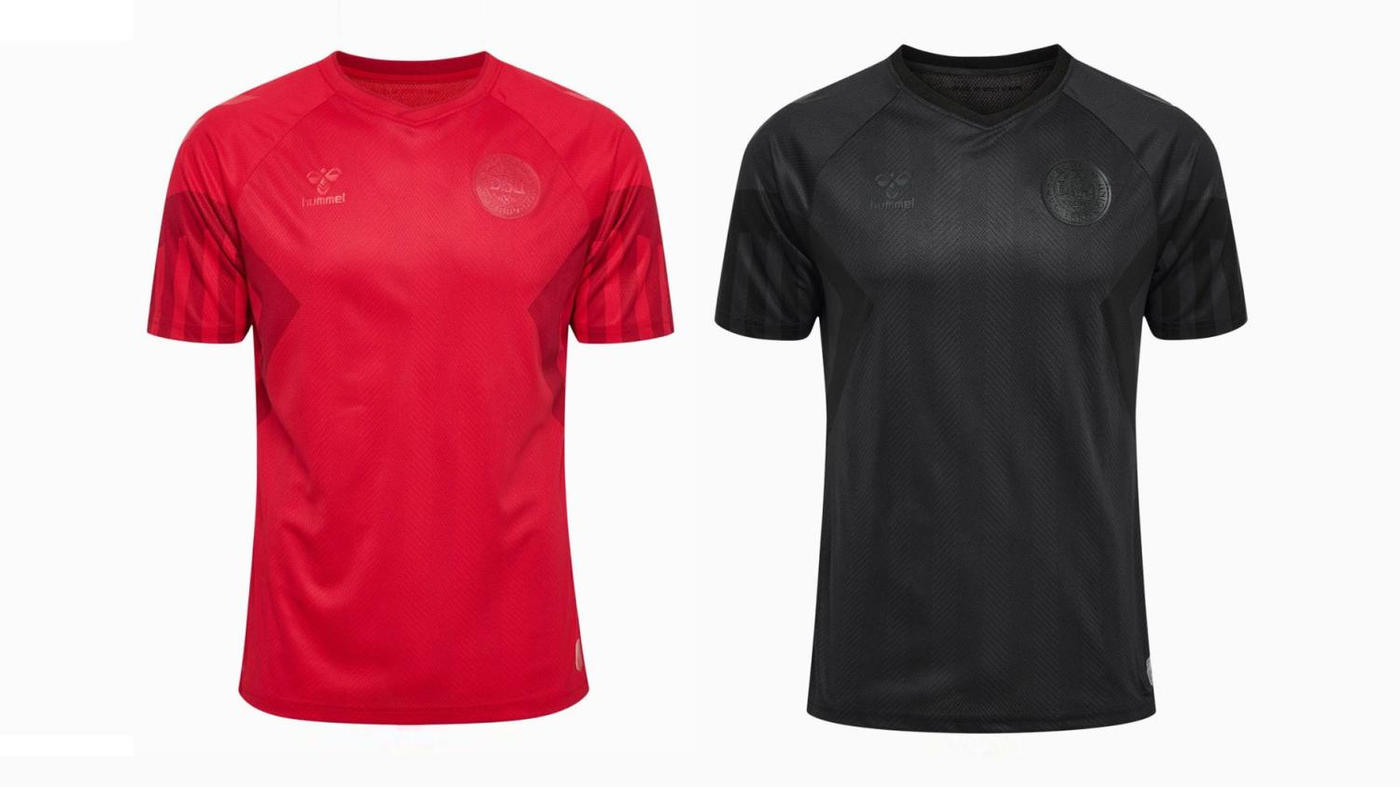 Hummel said an all black design, right, which will be Denmark's third kit in Qatar, signifies the 'colour of mourning' (Hummel)
By
MEE and agencies

The Danish sportswear company Hummel has said it has toned down the details on Denmark's football jerseys and also released a black kit in protest against Qatar's human rights record ahead of November's World Cup.

The new red kit is inspired by their Euro 92 success when Denmark won their only major title, but has its logo and details barely visible.

An all-black design, which Hummel said signifies the "colour of mourning," will be their third kit in Qatar.

"We've toned down all the details for Denmark's new World Cup jerseys, including our logo and iconic chevrons," Hummel Sport said on Instagram.

"We wish to make a statement about Qatar's human rights record and its treatment of the migrant workers that have built the country's World Cup stadiums."

Denmark is not the only team to be critical of Qatar, which has faced intense criticism from human rights groups over its treatment of migrant workers.

England's Football Association has also said families of migrant workers in Qatar who were injured or killed while constructing the infrastructure for this year's World Cup should be compensated.

Hummel did not respond to requests from Middle East Eye as to how many of the new shirts it expected to sell for the World Cup or whether any of the profits from the sales would be passed on to families of migrant workers in Qatar who were injured or killed during construction of the tournament's stadiums.

Based on data compiled from government sources, the Guardian reported last year that at least 6,500 migrant workers from south Asian countries had died in Qatar in the decade since it won the right to host the World Cup in 2010.

Qatar has said that the number of deaths among migrant workers in the country is proportionate to the size of the workforce.

Qatar's World Cup organisers, the Supreme Committee for Delivery and Legacy (SC), said it disputed Hummel's claim that "the tournament has cost thousands of people their lives".

"We have engaged in robust and transparent dialogue with the DBU (Denmark's football association)," a committee spokesperson told Reuters. "This dialogue resulted in a better understanding of the progress made, the challenges faced, and the legacy we will deliver beyond 2022.

"We whole-heartedly reject the trivialising of our genuine commitment to protect the health and safety of the 30,000 workers who built Fifa World Cup stadiums and other tournament projects.

"That same commitment now extends to 150,000 workers across various tournament services and 40,000 workers in the hospitality sector."

The government has said its labour system is a work in progress, but denied a 2021 Amnesty report that said thousands of migrant workers were still being exploited.

After Denmark sealed qualification for the 20 November to 18 December tournament last year, the DBU said it was instituting a series of measures to shine a spotlight on human rights issues in Qatar.

The DBU said its two training kit sponsors had agreed for their logos to make way for "critical messages" regarding Qatar while it would also minimise the number of trips to the country to avoid commercial activities that promote the World Cup hosts' events.