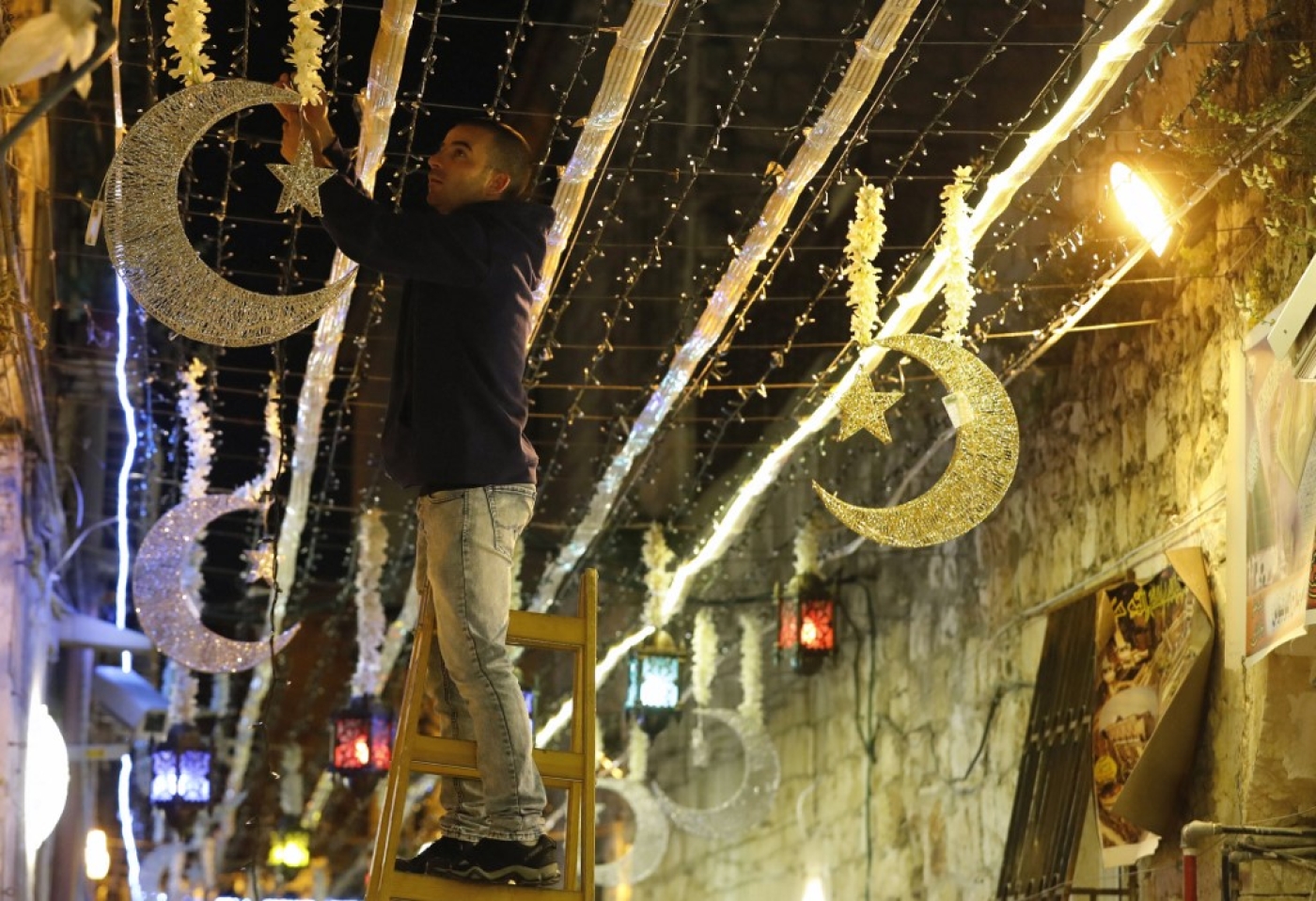 When Karen Hall became Muslim in 2001, the last thing on her mind was the moon. Having converted to Islam in Nigeria, Hall was eager to begin her journey as a Muslim.

She would learn how to pray and fulfil Islam's basic tenets by attending classes and speaking to friends who were back in her home town of Leeds. It was not until a few years had passed that the 52-year-old administrator began to notice her friends in the UK celebrating the end of Ramadan on different days. "I'd see one friend celebrating Eid on one day and another on a completely different day," recalls Hall, who has since returned to the UK.

"I just followed my local mosque to be on the safe side."

Yet the question of when to start and end fasting, established by the sighting of the new crescent moon, came up again when her son's Quran teacher said he would be following Morocco's moon sighting instead of Saudi Arabia's.

"I started asking myself who is correct. Two years ago, I had a real internal battle to figure out when I am supposed to begin fasting and if I should follow moon sightings here in the UK or somewhere else," said Hall.

Like millions of Muslims around the world, Hall will be preparing to fast for the holy month of Ramadan this week by waiting for the announcement of the new crescent.

Muslims follow the lunar calendar, with Ramadan being the ninth month of the calendar. Each lunar year consists of 12 months that last between 29 and 30 days, depending on the new moon's sighting on the 29th of each month.  If the new moon is not visible, the month lasts 30 days and begins the following day.

To sight the moon, Muslims would traditionally gather in an area to observe the sunset on the 29th day of the lunar month, then wait to see if the moon is visible at the point where the sun had set.

Moon sighters would be scattered across a country, with authorities urging the public to report any sighting of the new crescent.

And while Muslim-majority countries, like Egypt, Iran, Libya, Morocco, Oman, Turkey and Tunisia, rely on local moon sighters to spot the new crescent, many Muslims worldwide wait for Saudi Arabia, home to Islam's holiest sites, to make the call.

However, in recent years, some countries and Muslim communities have begun to question the authenticity of Saudi Arabia's moon sighting.

The kingdom relies on the Umm al-Qurra, a mixed lunar calendar where eight months are pre-determined and not based on a lunar sighting, while the remaining four months - considered holy in Islam - are.

On Thursday, Saudi Arabia's Supreme Court issued a statement urging the public to report any sightings of the moon on Monday the 12th due to "inconsistencies in the Umm al-Qurra calendar" for the Islamic month of Sha'ban."

Moon visibility charts produced by the Crescent Moon Watch in Britain also show that the moon would not be visible in the Gulf or the UK until Tuesday.

Islamic scholar Suliman Gani from southwest London argues that the Umm al-Qurra calendar means that Riyadh is sighting the moon "a day earlier than when it is physically possible to see the new crescent".

"We have the moon visibility charts and astronomers telling us that Saudi Arabia is getting it wrong. The moon is not even on the horizon some years for Saudi Arabia, so how can we continue to follow them?" he said.

Leading religious authorities in the kingdom, including Sheikh Abdul Aziz al-Sheikh, the Grand Mufti of Saudi Arabia, have even urged Muslims in Britain not to follow the kingdom.

But many still do so, or choose to follow countries closer to home, such as Morocco, leading the community and even families to be in the awkward position of starting and ending Ramadan on different days.

The decision for British Muslims to follow Saudi Arabia, Morocco or their country of origin instead of local moon sighting stems from the belief that poor British weather can make it impossible to see a new crescent, explained Iqbal Sacranie, founding secretary-general of the Muslim Council of Britain (MCB).

"Until the 80s, the majority of Muslims would follow Morocco because Islamic law states that if you are unable to see the moon in your country, then you should follow the sighting of the closest Muslim nation," said Sacranie, who has a special interest in moon sighting.

"But the problem would be that we'd receive news after midnight in the UK from Morocco, and we would not know if it was Ramadan or Eid the next day until it was too late or that the moon was not on our horizon," said Sacranie.

To address the issue, Sacranie brought together Muslim scholars from across Britain from various denominations and subgroups to discuss and resolve the issue of moon sighting in Britain during a conference in 1984.

He believed that if Muslims could follow data from the Royal Observatory in Greenwich to determine what time they pray, they could do the same for when to begin Ramadan and when to celebrate Eid.

The conference passed a resolution that said it would follow the local sightings for Ramadan and Saudi Arabia for Eid al-Adha, which marks the ending of the Hajj period. However, some Muslim groups decided to turn their back on the ruling and continue to follow Saudi Arabia or Morocco.

"It's unclear why they decided to go back to following Saudi Arabia or Morocco. It could be because of convenience or lack of understanding over how to sight the moon," said Sacranie.

He tried again to raise the issue while he headed the MCB in 1997. But with the umbrella body's membership split on the subject, the group's affiliates voted to let local communities decide what the best option was for them.

"When I talked to the British government in 1997, they were ready to make Eid a national holiday for schoolchildren, but when they asked me what day, we couldn't agree to one because there was division," said Sacranie.

Now a new generation of British Muslims has taken up the challenge. Imad Ahmed, a London-based academic and researcher, said the confusion motivated him to take matters into his own hands.

Armed with moon visibility maps and a high vantage point, Ahmed wanted to prove one thing: "Can we see the moon in the UK?"

"We began moon sighting with a mission. Is it actually too cloudy to see? And what we found is, no, it's not too cloudy to go and see the moon," said Ahmed, founder of the New Crescent Society, a group that aims to revive the Islamic tradition of moon sighting in the UK.

"It can be cloudy in London, but it's doesn't mean that it's cloudy in Birmingham or Scotland on the same day. If you have sighters across the country, then you have a better chance of sighting the moon if it is on the horizon," said Ahmed.

Over the last three years, the New Crescent society has been collecting moon sighting data from across the UK by encouraging local Muslims to go out and look for the moon. He hopes that amassing enough data will help establish a lunar calendar for Muslims in Britain to follow.

"We hope that by establishing a lunar calendar in Britain, then we could achieve what many have tried before - celebrate Eid on the same day.

"And that's part of the story of the building of Muslim institutions or Muslim organisations in the UK. Once upon a time, there were no mosques in the UK or halal food. Establishing a lunar calendar could be the next part of the Muslim story in Britain."

Since founding the New Crescent Society, Ahmed has travelled across the UK, giving presentations to Muslims and mosque elders on the possibility of establishing a lunar calendar.

He believes that creating such a calendar for Britain could be possible with a growing number of clerics and mosque committees turning to the idea.

At the heart of this question is what is time and who has the authority to define time, explained Ahmed.

"Creating an Islamic lunar calendar cannot be done without the community. If the community sees the moon, you begin, and if you don't, you cannot start.

"This process cannot be done without the community because you need moon sighters in different parts of the country. Not one person can do it alone."

It was through one of Ahmed's events that he met Hall and changed her life.

"The first time you see the Ramadan moon, you are in awe, and when you see it once, you want to see it again and again," said Hall.

"It is quite moving and fills you with joy and elation because you don't see the new moon every month."

Hall has now been following local moon sightings for nearly two years, taking time out every month on the 29th day of the lunar month to spot the new moon with others from the New Crescent Society.

It has also meant that she has stopped going to Eid prayers at her local mosque, which follows Saudi Arabia's moon sighting.

"It can be really tough not being able to start Ramadan and Eid on the same day as your friends, but we still see each other and wish each other a happy Eid," she said.

"People are curious and some even come with me when I go to sight the moon every month.

"Everyone wants to fast on the same day, but it's a question of how do we achieve that, and I think we've found a solution to make that possible." TV
Ramadan TV: Seven things we learned from the 2020 shows