Raqqa to be part of decentralized Syria, US-backed SDF says

The city and province will become part of a decentralised, federal Syria, the SDF have said Kurdish fighters of the Syrian Democratic Forces (SDF) ride in the back of a truck passing damaged buildings in Raqa on October 20, 2017 (AFP)
By
MEE and agencies

The Syrian city of Raqqa and surrounding province will be part of a decentralised federal Syria, the US-backed Syrian Democratic Forces (SDF) militia that captured the city from the Islamic State group (IS) said on Friday.

"We pledge to protect the borders of the province against all external threats, and we confirm that the future of Raqqa province will be determined by its people within the framework of a decentralised, federal democratic Syria in which the people of the province will run their own affairs," the SDF said in a statement formally declaring Raqqa's capture from IS.

Speaking at an official ceremony in the city on Friday, Talal Sello, spokesman for the SDF, said the victory was for "all humanity."

Kurdish-led authorities in other parts of northern Syria are already moving ahead with plans to establish the federal system in areas they control, kicking off a three-phase election process last month in Kurdish majority regions.

The plans for autonomous zones in northern Syria have encountered broad opposition from the United States, neighbouring Turkey, and the Syrian government in Damascus.

President Bashar al-Assad, who is regaining territory with Iranian and Russian military support, has repeatedly said the Syrian state will recover control over the entire country, which has been fractured by six years of conflict.

"We dedicate this historic victory to all humanity," said Talal Sello, spokesman for the SDF, at an official ceremonty in the city on Friday.

'We dedicate this historic victory to all humanity'

"We in the general command of the Syrian Democratic Forces announce that we will hand over the administration of the city of Raqqa and the surrounding countryside to the internal security forces in Raqa," Sello added, referring to part of a civil authority set up for the city.

But Sello said the handover would not be immediate, with SDF fighters still combing the city, which lies in ruins and littered with explosives.

"After the end of clearing operations... we will hand over the city to the Raqqa Civil Council," he said.

The RCC was created some six months ago, and is made up of local officials who will face the daunting task of rebuilding the city.

On Thursday, Syrian social media users reacted with alarm after the SDF unveiled a large picture of Kurdistan Workers' Party (PKK) leader Abdullah Ocalan in the centre of Raqqa following the city's liberation.

The United States praised local Syrian forces Friday for a "milestone" victory in driving IS from Raqqa, but warned the war against the jihadists is far from over.

"The liberation of Raqqa is a critical milestone in the global fight against ISIS," the State Department said in a statement congratulating the SDF and other forces.

But the "loss of Raqqa does not mean our fight against ISIS is over," it added, using an alternate acronym for the militant group.

"The global coalition will continue to draw on all elements of national power - military, intelligence, diplomacy, economic, law enforcement, and the strength of our communities until all Syrians have been liberated from ISIS brutality and we can ensure that it can no longer export its terror around the world."

The US-led coalition of nations that has been providing air support and training to local ground forces also sent congratulations.

"We are still fighting the remnants of (IS) in Iraq and Syria, and will continue to facilitate humanitarian efforts assisting citizens adversely affected by a brutal occupation, who face a long battle to gain their freedom," Lieutenant General Paul Funk, who heads the coalition, said in a statement.

"A tough fight still lies ahead."

And French President Emmanuel Macron said that France's military would continue its fight against lslamic State in Syria, but that attention needed to now also turn to finding a negotiated political transition in the country.

"The battle against Islamic State did not end with the fall of Raqqa and France will maintain its military effort as long as necessary," Macron's office said in a statement. "The challenges of stabilisation and reconstruction will not be less than those of the military campaign.

"Syria must finally find a way out of the civil war, which has fuelled terrorism since the suppression of the democratic movement by the Bashar al-Assad regime. A negotiated political transition is more necessary than ever."

A proposal to convene a congress of all Syria's ethnic groups is a joint initiative which is being promoted by Russia and others and is now being actively discussed, the Kremlin said on Friday.

It is premature, however, to discuss the time and venue for the congress, which is seen as a mechanism to assist Syria's post-war development, Putin's spokesman Dmitry Peskov told a conference call with reporters.

Putin mentioned the idea of holding such a congress at a forum with foreign scholars on Thursday. 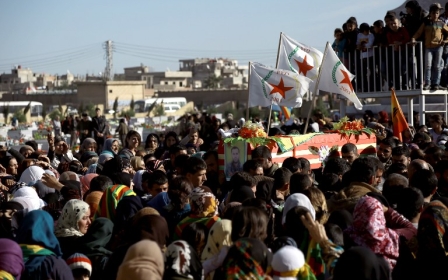