Supplies are running dangerously low in the coastal enclave, putting many of Gaza's sick at risk 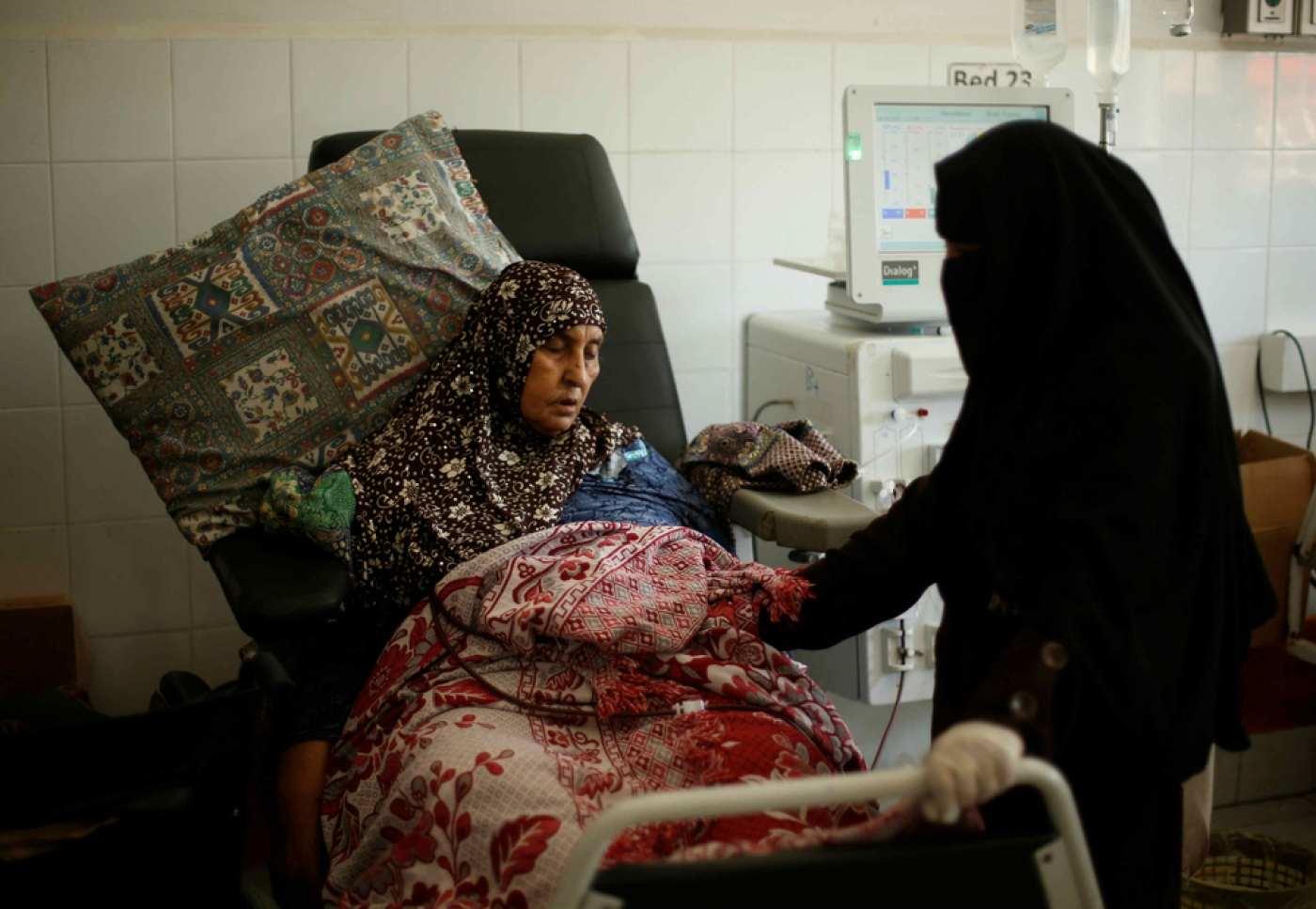 KHAN YOUNIS, Gaza – Farid Qudeih has been receiving dialysis from Nasser Hospital in the Gaza Strip’s Khan Younis ever since he began to suffer kidney failure two years ago.

The sessions are long and he needs them three times a week, but the treatment has kept him going, and allowed the 52-year-old to live his life alongside his 13-person strong family.

Severe shortages of fuel in the besieged coastal enclave have, however, threatened his treatment, and put Qudeih and thousands of other Palestinians requiring medical attention at risk.

Both the Gaza health ministry and the World Health Organisation (WHO) have warned of a “real catastrophe” if new sources of fuel aren’t found, with supplies set to hit rock bottom in a week’s time.

In 2017, Palestinian President Mahmoud Abbas pulled the plug on Palestinian Authority (PA) funds for fuel in the Gaza Strip, part of a number of moves to squeeze the Hamas movement.

Hamas and Abbas’s Fatah party, which dominates the PA in the occupied West Bank, have been at odds since 2007, when the movement took control of the coastal enclave.

Abbas’s fuel embargo has only exacerbated this, with electricity supply about 50 percent of what it should be. Gaza’s health ministry has kept its generators running through international donations, but now those funds are coming to an end.

"What is the guilt of thousands of patients who are suffering from the disease and paying the tax of internal Palestinian political contradictions?" asked Qudeih, an education inspector.

Over the two years he has been taking dialysis, Qudeih has experienced shortages of medicines, equipment and medical supplies, as well as a lack of fuel and power cuts.

In one of these cases electricity was cut off, causing a blood clot to form in the tubes of a dialysis machine, which worked its way into one patient’s body.

The patient lost blood as a result, with it taking a significant amount of time for doctors to treat the problem and for the patient to recover.

Seeing this happen terrified others in the hospital, Qudeih said.

In his view, responsibility for the successive crises and shortages in the Gaza Strip lies both with Hamas and the PA.

He believes that the solution to the situation lies in "ending the division", but he saw no hope of that happening any time soon as the conflict between the two parties continues to escalate.

Suleiman Abu Amer, a 36-year-old man accompanying his elderly father as he visits the dialysis unit for treatment, agrees with Qudeih.

He says that both rival factions must take responsibility for the deteriorating situation.

Power outages have been a common occurrence and threat for Abu Amer’s 72-year-old father. And the thought that the power may cut out at any point during the dialysis process has gripped them with fear.

A report released last week by the Union of Health Care Committees described the state of healthcare in Gaza in 2018 as “the worst”.

The head of the union, Raed Sabbah, said that the health services witnessed a marked setback in 2018 due to several factors, the most important of which is the continuation of the siege and political division.

He also cited the fuel shortage crisis and the continued power outages, which have caused the disruption of many services and the inability of facilities to perform their duties as fully as possible.

As the new year arrived, the situation appeared to be taking a turn for the worst.

On the last day of 2018, Jamie McGoldrick, the UN's development and humanitarian coordinator in Palestine, warned that the “severe humanitarian disaster will worsen” this year due to the fuel shortages.

He said $2m was desperately needed in order to keep "saving lives in hospitals and clinics".

McGoldrick recalled a recent experience at a hospital, when he saw a doctor having to manually pump air into the lungs of a child on a ventilator when power was cut out for almost a minute.

"This is a situation that is repeated every day. There are people in hospitals that cannot leave because there is no electricity in their homes. They are stuck in hospitals. In homes, life is paralysed because of limited hours of electricity," he said.

"The fuel crisis is part of the complex crises that have plagued the health sector since Israel imposed its blockade in 2006," Gaza health ministry spokesman Ashraf al-Qidra told Middle East Eye.

Since the UN’s emergency fund ran dry in November, the ministry has followed a “series of austerity measures to prolong the remaining fuel,” Qidra said.

Things might have been worse, he added, were it not for a Qatari grant that has helped keep the only power plant in Gaza active, reducing the number of hours hospitals need to reply on generators.

It is a particularly difficult time of the year to conserve fuel, as chilly winter temperatures encourage greater consumption. As a result, power cuts are growing in frequency.

This is a situation that is repeated every day. There are people in hospitals that cannot leave because there is no electricity in their homes

Currently, around 300,000 litres of fuel is needed per month to keep medical facilities functioning properly.

Gaza has less than 40 percent of that, and Qidra warns that if the Strip’s reserves were to empty out completely, all health facilities would be paralysed and thousands of patients’ lives will be at risk.

The director of the WHO’s Gaza office, Mahmoud Daher, warns that the health sector crisis is "serious, real and very dangerous".

"The health situation will be extremely dangerous and the lives of thousands of patients will be in the wind," he told MEE.

"We are not an institution to blame anyone," he said, declining to point fingers at one side in particular, but stressed that "responsibility is shared".

Daher said the PA’s health ministry in the West Bank is fully aware of the precarious situation Gaza has been put in partly as a result of its withholding of cash.

"It knows more about the reality of the serious situation in the health sector in Gaza, and international reports are available to all," he said.

This was confirmed by Qidra, who said a detailed report on the real crisis and its seriousness was given to the ministry in Ramallah, but "we received no assurances to move to remedy the situation."

Daher stressed that "the seriousness of the crisis highlights the absence of any promises to resolve it from any point until this moment".

Hamas politburo member Suhail al-Hindi believes the fuel crisis and other calamities are manufactured by Palestinian President Mahmoud Abbas to turn people in Gaza against the movement.

"All indications show that the authority headed by Abu Mazen [Abbas] is interested in the escalation and pressure on people in Gaza as a way to push them into a coup against what is described as the authority of Hamas, which is dangerous and its consequences are serious," he told MEE.

Hindi warned of a "big explosion" in light of the great suffering of thousands of families, and stressed that the effects of this would have serious consequences for the Palestinian cause, and that Abbas would not benefit from his punitive policies towards Gaza.

On Sunday, the PA announced it was withdrawing from Gaza’s Rafah crossing with Egypt in response to Hamas’s "brutal practices". Sources close to Hamas revealed with condition of anonymity a discussion within the leadership frameworks to expel PA staff from the Kerem Shalom and Erez crossings too.

The sources speculated that Abbas is seeking to "incite" Egypt and the Arab League to move against Hamas, in order to gain "Arab legitimacy" for the PA's escalation and punitive measures.

On Tuesday, Egypt restricted Palestinians’ movement through the Rafah crossing, which is the only way in and out for 95 percent of Gaza residents.

However, Hindi said he has faith that regional players will help deescalate the crisis and find relief for Gaza.

"There are wise heads in the Arab League and the Arab capitals, who will say to Abu Mazen ‘no’, and will not agree to his plans against Gaza."