REVEALED: The secret US-Iran deal that installed Kadhimi in Baghdad

Tehran ordered Shia factions to back prime minister in return for Washington 'looking the other way' over release of assets targeted by sanctions, Iraqi officials tell MEE 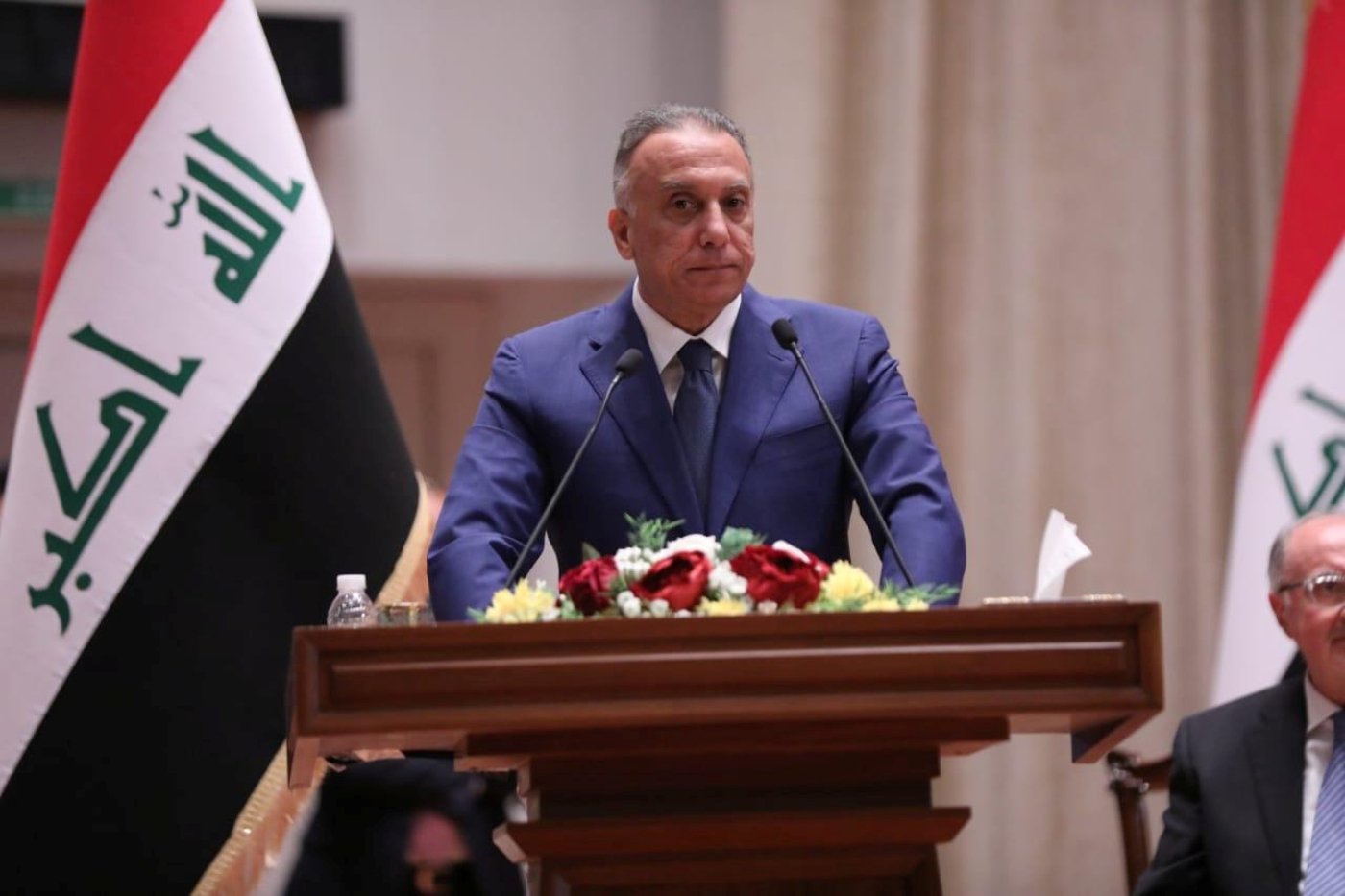 The nomination of Mustafa al-Kadhimi as Iraqi prime minister was the result of a horse trade between the US and Iran in which Tehran agreed to back the former intelligence chief in return for an unfreezing of some of its assets targeted by sanctions, senior Iraqi political sources have told Middle East Eye.

The US policy of exerting "maximum pressure" on Iran will not change, but the US agreed to de-escalate militarily in the Gulf and to "look the other way" if a third-party country in Europe released some of the Iranian money frozen when sanctions were applied, the Iraqi sources said.

As recently as 4 March, Kadhimi's candidacy for the premiership was called a “declaration of war on the Iraqi people” by the top commander of the pro-Iranian Kataib Hezbollah militia, Abu Ali al-Askari. Other Shia militia and political leaders also vociferously opposed Kadhimi’s nomination and yet last week his new government was installed with majority support in Iraq's parliament.

Kataib Hezbollah continued to threaten Kadhimi personally but other Shia political factions influenced by Iran allowed his nomination to go ahead.

Iraqi sources say that a behind-the-scenes deal between Washington and Tehran explains the sudden U-turn, with Iran agreeing to lean on the Shia factions it influences in return for some relief from economically crippling US sanctions with the unfreezing of some assets in Europe.

Iraqi sources declined to say where Iranian assets would be unfrozen, but pointed to a decision last month by a court in Luxembourg to block a US request to transfer $1.6bn in Iranian assets to victims of the 9/11 attacks in a case dating back to 2012.

The Iranian assets are held by a Luxembourg-based clearing house, Clearstream, owned by Deutsche Boerse. The court decision was hailed by Iranian President Hassan Rouhani who said the country had won a legal victory over the assets that had long been frozen in Luxembourg at Washington's request.

“The Americans managed to get their man, and the Iranians to get their money,” said one source with knowledge of the secret deal.

“The economic hardship that Iranians have faced, and all the difficulties they faced after the assassination of Qassem Soleimani, has hit them hard. There were negotiations. The deal ended with the Iranians accepting this guy [Kadhimi] and they told their allies to vote for him.”

Kadhimi was asked in April to form the government after failed attempts to first install Mohammed Tawfiq Allawi and then Adnan al-Zurfi as prime minister, following the resignation of Adel Abdul Mahdi last November over the killing of protesters by Iraqi security forces. In March, a senior source in Tehran told MEE that the US had agreed to grant waivers allowing some countries to release Iranian assets without facing punitive measures to help Iran to buy medical supplies to fight the coronavirus outbreak.

"The efforts of some countries have led to the release of some of the Iranian central bank's money," he said.

"Those countries will receive a sanctions waiver [for releasing Iran's frozen assets], this has been granted and we are following this issue.”

He added: "The unfreezing of Iranian central bank money will decrease pressure regarding the lack of foreign exchange for importing medication and life necessities."

The Iranian source denied then that an official deal had been struck between Tehran and Washington. The report was also denied by the US State Department.

The Iraqi sources said that a precedent for the current agreement was set when Nouri al-Maliki was backed for a second term as prime minister by both Washington and Tehran, after nine months of political conflict following the victory of the al-Iraqqiya bloc in 2010 elections.

The sources said that the US’s withdrawal of Patriot missiles from Saudi Arabia last week and a lowering of military tensions in the Gulf was part of the deal with Tehran.

Kadhimi has a track record of working with US intelligence services, which dates back to his association with Ahmed Chalabi, the late Iraqi politician who provided US President George W. Bush with false reports about Saddam Hussein’s weapons of mass destruction before the invasion of Iraq in 2003.

A former journalist and editor with Al Monitor news website, whose real name is Mustafa Abd al-Latif, Kadhimi became head of intelligence services under the premiership of Haider al-Abadi.

In 2018, he attended a meeting in Washington with Mike Pompeo, who was then head of the CIA, and Khalid bin Ali al-Humaidan, the head of Saudi intelligence, to discuss measures to support the candidacy of Abadi and counter Iranian backed candidates. That effort failed.

MEE phoned Kadhimi's office repeatedly for comment on this story but our calls went unanswered.

The possibility of a deal between the US and Iran over Kadhimi has been commented on in the Arab media.

The London-based Al-Quds Al-Arabi newspaper said in an editorial that the Iraqi parliament's approval for the new government was important, but that it was an Iranian-American deal which was the “decisive matter that opens the way for the parliamentarians' agreement, and then the regional and world agreement”.

In The Arab newspaper, also published in London, Ibrahim al-Zubaidi wrote: ”As you saw and you see, [political currents] agreed to pass it in parliament, as if nothing had happened, only when the last orders and instructions were issued from the [Iranian] embassy in Baghdad, or from the embassy of Uncle Donald Trump. Theatrics you would not have believed.”

Kadhimi's nomination has been publicly welcomed in both Washington and Tehran.

Iranian President Hassan Rouhani said Iran would "be with the government with all our might to help it progress and establish stability", according to a statement on the Iranian foreign affairs ministry website.

Meanwhile, US Secretary of State Mike Pompeo last month announced details of a proposed strategic dialogue with the Iraqi government that is set to take place in June. Pompeo said that "all strategic issues" would be on the agenda at the talks.

Officials in Washington and Tehran played down reports of a deal over Iraq.

A State Department spokesperson dismissed the reports as "absurd".

"We respect Iraq’s sovereignty and have consistently advocated for Iran to do so as well and end its interference in their internal matters," the spokesperson told MEE.

The Iranian foreign ministry did not respond to a request for comment but an Iranian official approached by MEE said he had not heard of any deal, and described it as "unlikely".

Significantly, the first call Kadhimi got after his nomination was from the crown prince of Saudi Arabia, Mohammed bin Salman, who asked the new Iraqi prime minister to restart mediation with Iran, the sources said.

Although bin Salman will consider Kadhimi closer to him than any other candidates, the restart of a dialogue between Washington and Tehran is not strategically good news for Saudi Arabia. Secret negotiations by Oman to release an American prisoner in Iran ended up with the nuclear deal between Iran and the US under Barack Obama.

Along with the unilateral withdrawal of US-operated Patriot missiles, the crown prince is coming under fresh US pressure to end the three-year blockade on Qatar. To this end, the emir of Kuwait sent a minister to Qatar to reopen mediation efforts.

“While Trump will claim credit for his maximum pressure policies on Iran, the fact is US policy in the Gulf, the Saudi campaign in Yemen which it can no longer afford, and the pressures on Iran - all three powers are in trouble. And this is something for the Saudis to consider: the collapse of a US-based strategy to push back on Iran. Trump will not mind negotiating a new nuclear deal with Iran, just as long as it has got his name on it,” said one Iraqi official.

This may lead to negotiations resulting in further agreements between Washington and Tehran, the Iraqi official added. 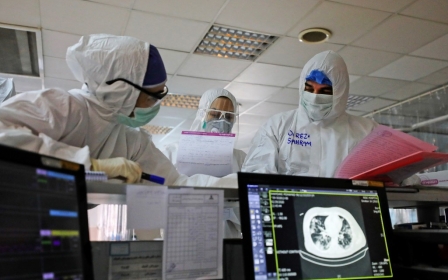