From Russia to South Korea: A Coptic Egyptian family struggles to find home

The Danials refused to stay silent about who killed their brother. Three years later, they are still searching for refuge 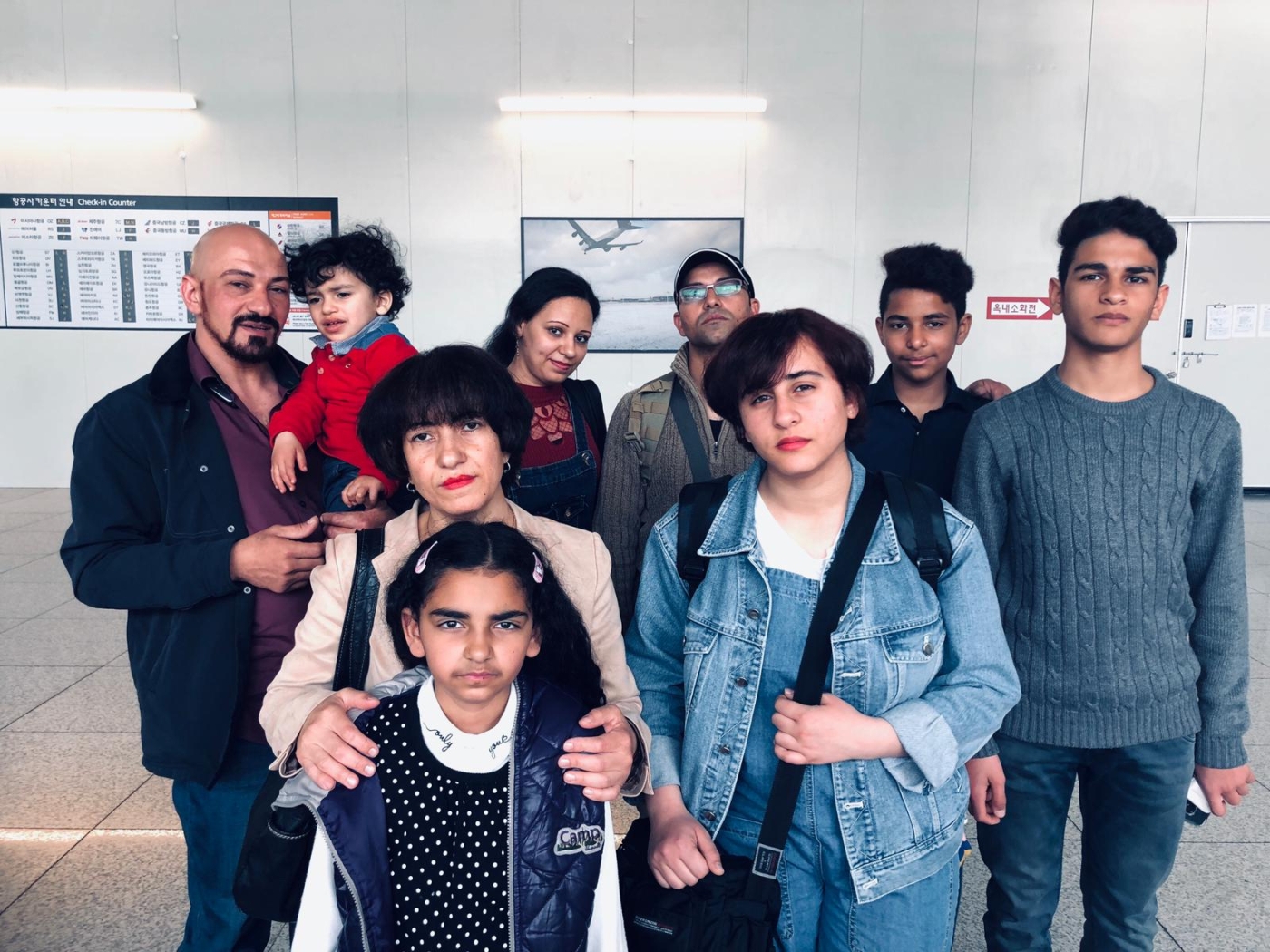 Mina Danial’s family was looking for a home when they left Egypt in 2016, fearing repression by the government of President Abdel Fattah el-Sisi, whom they had openly opposed for years.

Mina, a Coptic Egyptian activist, had become one of the icons of the 2011 revolution against the rule of ousted president Hosni Mubarak.

Then on 9 October 2011, during a protest against the demolition of a church in front of the Egyptian state TV headquarters in Cairo, Egyptian soldiers shot and killed Mina. He was 20 years old.

The killing of 28 Christian protesters that day became known as the Maspero Massacre, the largest incident of state-sponsored sectarian violence in Egypt's recent history.

In the years that followed, his family have publicly accused Sisi, the head of military intelligence at the time of Maspero, of killing Mina, and that, they say, has made them a target.

In 2016, they fled Egypt first for Russia before eventually ending up in South Korea, where they had started to settle down, working long hours and, unable to afford language lessons, operating with limited Korean.

Earlier this month, their lives were put in limbo once again when the Korean government denied several of the family's asylum requests. Determined to stay together, they attempted to board a flight to Germany.

When the airline refused to let them fly, they slept in Seoul's Incheon International Airport for three nights, until the UNHCR offered to house the family temporarily.

[Translation: The children are tired, and had no food except for snacks... We are also tired and this is the situation now in the airport.]

"Of course we cannot return to Egypt, with its climate of repression," Mary, Mina's older sister, told MEE by phone from the family's temporary home just outside Seoul. "We would like to seek asylum in a country that respects human rights, regardless of race or colour."

Their story is only one in a growing number among the thousands of Egyptian dissidents who have fled since Sisi's coup in 2013 and are struggling to find secure homes once they leave.

Many have relocated to Turkey, the US, Canada and Europe, where they have been granted refugee status. Others who are unable to claim asylum are left in precarious conditions and routinely face the risk of deportation to Egypt.

In February, Turkey deported Egyptian activist Mohamed Abdelhafiz after allegedly discovering that he had entered the country on a forged visa. Last month, Malaysia extradited four Egyptian dissidents to Cairo despite warnings by human rights groups that they would be at risk of torture and enforced disappearance.

"The case of Mina Daniel's family is very illustrative of the human impact of the Egyptian government's crackdown," said Hussein Bayoumi, Egypt researcher at Amnesty International.

"Mina's family continues to pay the price just for wanting justice for their brother and now they have been forced to leave Egypt. The [South] Korean authorities have a responsibility to protect the family and ensure that they are not deported."

The Egyptian embassy in Seoul has been contacted for comment.

The South Korean embassy in London did not respond to a request for comment from MEE on the case.

Activists say Mina Danial was present at all of the major protests during the 2011 uprisings, but his fame was sparked mainly after his death, as a "martyr" of the revolution who became known as "the Egyptian Guevara".

He had grown up in Ezbet el-Nakhl, a poverty-stricken town north of Cairo with many slums, where his family remained before they fled, working as plumbers, carpenters and electricians.

Mina was studying IT at a private academy in Cairo, while also working alongside his brothers.

Coptic Christians make up at least 10 percent of Egypt's predominantly Muslim population. They have historically suffered social and political discrimination as well as sectarian violence. The Egyptian church, however, has backed the Sisi government, despite rising sectarian violence under his rule.

Since Mina's killing, his family have been publicly outspoken, denouncing the church for failing to demand justice for the Maspero victims as well as Sisi for being in a position of authority during the massacre – and that, they say, left them vulnerable.

They broke into my home looking for me, confiscated my son's laptop and threatened my wife and scared my children. That is why we all decided to leave Egypt

- Milad Danials, one of Mina's brothers

"We are a target of persecution because we always named Sisi as Mina's killer," Mary, 48, told MEE by phone.

In an interview with the Jordanian website Al Bawaba, conducted on the anniversary of Mina's death in October 2014, Milad Danial, 36, accused Egypt's military council, including Sisi, of killing his younger brother.

After the interview aired, Milad told MEE that he received death threats by phone and was warned to stop making public comments about Mina. But in July 2015, on Mina's birthday, he made the same accusation, chanting with other young people.

"The day passed normally," he said. "But the next morning, I received a phone call from someone who asked me to go to his home to do some plumbing."

When Milad arrived, he said Egyptian security forces arrested, blindfolded and interrogated him for two days, tortured him for three more and then left him unconscious at a random location.

"Six months after leaving Egypt, they broke into my home looking for me, confiscated my son's laptop and threatened my wife and scared my children. That is why we all decided to leave Egypt," he said.

Danial’s family left Egypt in March 2016 amid a crackdown on opposition by Sisi. They stayed in Russia for 40 days, planning to move on to Germany, but a group of people who promised to get them into Germany stole their money, said Mary.

They ended up in South Korea, four children in tow, with a fifth born after their arrival. It wasn't paradise: family members earned only enough to pay for bills and food, and they picked up basic Korean along the way to get them through everyday life.

Life went on like this for nearly three years until the family found itself in a bureaucratic bind earlier this year: while Mary, her husband and son were granted asylum in November, Milad’s application, which included his wife, son and daughter, was rejected, leaving him at risk of deportation.

Emad, another brother, is still waiting to hear from the South Korean government after applying in September 2016.

So earlier this month, the Danials decided to move once again in an attempt to stay together. They booked a flight to Cairo - where they didn't want to go, of course - but which had a stop in Germany, allowing three hours transit without visas.

But when they tried to board the plane in Seoul, they were refused and started a sit-in in front of the Lufthansa counter at the airport. On the first day of their protest, as Egyptian actor Khaled Abol Naga tweeted, airport authorities tried to forcibly drag them away:

[Translation: 'My heart and mind are with the family of Mina Danial. Let's pray that they are safe!']

But they clung tight for three days and nights in the airport, hoping a flight would eventually take them away.

They were offered temporary accommodation by the UNHCR office in South Korea, and are now awaiting help with their asylum ordeal. Many people have offered donations, seeing the family's posts on Facebook from the airport, but they refuse to take money over their situation or in Mina's name, Mary said.

"All we want is to be offered asylum in a country that respects human rights and dignity," she said.

And despite having her asylum claim accepted, Mary refuses to be separated from her family members. She and her husband have recently divorced, and her family is all she has now, she said.

"No one is closer to me than my brothers. They will not leave me behind." 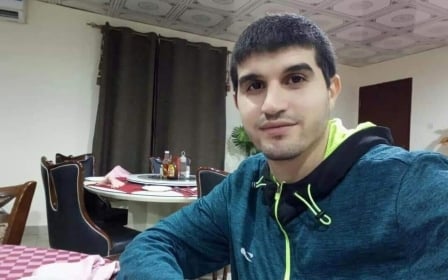