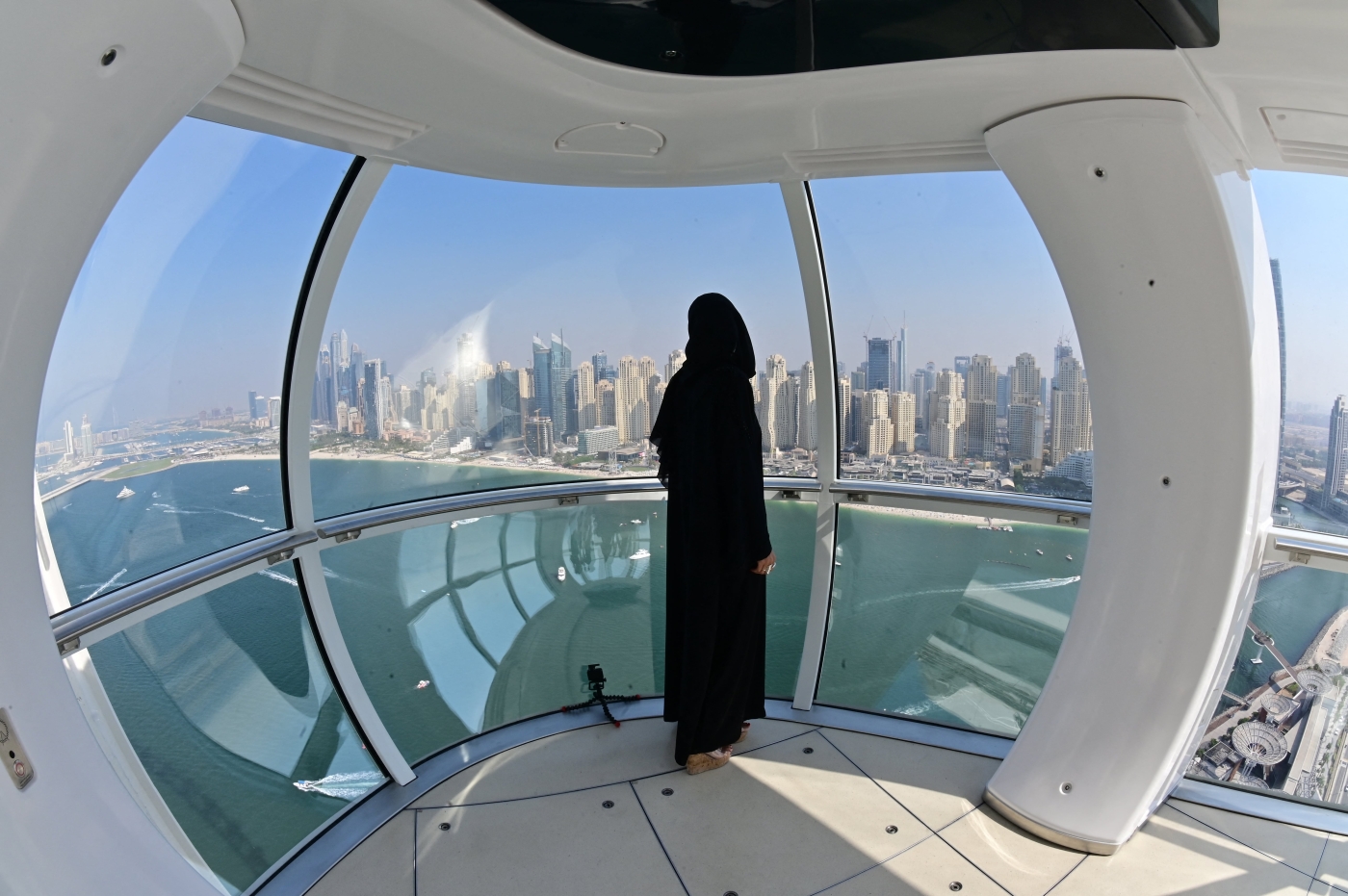 A woman looks out at Dubai from inside a capsule of the Dubai Eye (Ain Dubai), the world’s largest and tallest observation wheel, located in the Emirati city, near the Dubai Marina, on 21 October, 2021 (AFP)
By
Sean Mathews

In early March, Gleb Mikhailov boarded a flight from Moscow to Dubai. "I saw no future left in Russia," said the founder of Teamatix, a startup that uses cloud technology to automate operations for the hotel industry.

He said business uncertainty, triggered by Russia's invasion of  Ukraine, had accelerated his plans to expand operations in the Middle East.

Mikhailov, who is now based full-time in Dubai, is in talks with Emirati-based venture capital firms to raise funds and is working to relocate his nine staff - spread out across Russia and Ukraine - to Dubai.

"Dubai will become the next silicon valley," said Mikhailov, who sees the city's booming hotel and tourism sectors as primed for his cloud-based management software. "The opportunities here are huge."

Mikhailov is not alone in tech professionals and entrepreneurs who are opposed to the invasion of Ukraine and worried about the impact of tightening Western sanctions, fleeing Russia for brighter prospects abroad.

By 22 March, a Russian tech industry trade group estimated that up to 70,000 tech professionals had left Russia and that another 100,000 could follow in April.

Many have travelled to Turkey, Armenia, and Georgia, but others are going to Dubai where the influx of tech talent  is landing on a ripe and wealthy ecosystem that has seen its status as a tech hub swell due to new regulations, easy visa rules, and a zero income tax policy.

Last year, scale-ups in the Emirate drew about 60 percent of the total $9.1bn raised by Middle East tech firms, according to a recent report by the Dubai Chamber of Commerce.

For years, tech-focused Russians have sensed opportunity in Dubai. In 2018, a Russian Center for Digital Innovation was opened in Dubai's Internet City.

"We always had Russian tech talent coming here, but now they are just pouring in, and it's going to be a positive for the ecosystem," Abdul Wahab al-Halabi, an Emirati entrepreneur and long-time Gulf investor, told Middle East Eye.

Over the past two months, Telegram groups with hundreds of members have sprung up to help Russian tech workers trying to emigrate to the UAE, with those who have already arrived offering their compatriots advice on finding apartments and jobs.

"The Dubai-Russian tech community has become very supportive for people trying to relocate," Polina Meshalkina, head of business development at Teamatix, told MEE. "In some ways it's even easier now than before the war."

David Lolaev, the founder of SalAd, a marketing agency and digital branding company for crypto firms, relocated to Dubai from Russia in October 2021. He said the number of social events held specifically for Russian tech professionals in Dubai has skyrocketed since the war in Ukraine began.

In March, he was a speaker at the first conference held in the UAE about NFT and crypto conducted purely in Russian. The talk drew more than 500 people.

"It was a 'wow' moment," Lolaev said. "Dubai never had something like that in the past."

So far, it has been the founders of Russian tech firms at the forefront of the exodus. Some, like Mikhailov, had already set up companies in the Emirate with an eye towards future business opportunities, while newcomers are taking advantage of Russians' ability to stay in the country for 90 days visa-free to establish a company and eventually obtain residency.

'One for the history books'

Russian crypto professionals have also been among the top arrivals. Ralf Glabischnig, founder of Crypto Oasis, a Dubai-based group assisting blockchain and crypto startups establishing in the UAE, told MEE that applications from Russian crypto firms to onboard with Oasis had climbed 500 percent since January.

Out of the 39 companies he signed up in March, about 10 came from Russia, he said.

Big global industry players such as Binance, Crypto.com, and Bybit have all set up shop in the Emirates. Because much of their wealth was already stored in digitial currency, it was easy for Russian crypto entrepreneurs to leave their homeland after Western sanctions struck, and Dubai was a natural second home.

“We always had Russian tech talent coming here, but now they are just pouring in"

"Lots of really good Russian developers in blockchain and crypto are coming to Dubai and its helping the industry," Glabischnig said.

But there could also be a positive spillover outside of digital currencies.

Speaking broadly to MEE about the startup ecosystem, Noor Sweid, general partner and founder at Dubai-based VC fund Global Ventures, identified Web 3 as "one of the most exciting growth sectors" emerging from Dubai's tech scene today.

Web3 is a vision for a decentralised internet that is underpinned by blockchain technology - the same digital public ledger system that makes cryptocurrencies possible.

"They will be writing about this in the history books," he said.

While the tech sector in Dubai has made impressive gains recently, it is still in its infancy.

More than half of all scale-ups in the Emirate were founded less than five years ago. And similar to other nascent ecosystems, it must contend with issues like copycat companies. Even some of the more successful startups have grown by replicating business models that were pioneered in developed markets such as the US.

"Russians are especially known for their deep tech skills, and engineering prowess. That's a skills gap the UAE needs to fill in order to mature," Adeleke said. "We could see an evolution with these new arrivals helping drive real technological innovation."

'Living in Dubai pays out'

One challenge to that outlook could be Dubai's high cost of living. The salary of an IT professional, who can work wherever there is wifi, goes much further in cheaper destinations such as Armenia and Turkey than the glossy Emirates. Steep prices have also deterred freelancers and young startups from relocating.

"Living in Dubai pays out for owners and executives to expand their business and make deals, but for most IT staff it doesn't make a lot of sense," Konstantin Vashenko, chief business development officer of Dubai-based crypto platform auto.farm, told MEE.

65apps, one of Russia's largest app development companies, established an entity in Dubai shortly before the war in Ukraine broke out. Although the majority of its 200-plus employees work remotely, only one has plans to leave Russia, and they are going to Turkey.

The company hopes to use its presence in the UAE as a springboard into the Gulf, but has no plans to exit its home market.

"At the moment we are looking for locally developed alternatives to Western software to reduce our reliance on foreign tech," Eldar Karamov, an executive at the company, told MEE.

Loran Akopyan is the CEO of iPavlov, a Russian AI and deep tech company that also has a base in the UAE. He sees the Gulf region as "the best shot for Russian businesses today", given many countries' neutral stance in the Ukraine conflict, but, like 65apps, he has no intention of uprooting his staff of around 250 from Russia.

"It would be really expensive for me to relocate," he said, citing not only the higher salaries in Dubai, but the need for sophisticated and capital heavy infrastructure to develop AI products, which the Emirate still lacks.

Besides more nimble firms and crypto professionals, a big driver of the tech exodus has been international companies who have given their employees the option to leave, and have the deep pockets to relocate them. In recent weeks, Visa and Alphabet Inc's Google both moved workers from Russia  to the UAE.

"The tech talent is coming here [the UAE], perhaps slower than other destinations, but it's also the top echelon arriving," said Andy Dokuchaev, Russian-born founder of Talnet, a company matching tech workers from Eastern Europe with startups worldwide.

A surge in demand  following Russia's invasion of Ukraine prompted Dokuchaev to accelerate his plans to open an office in the UAE, where he has already started placing Russian tech workers with startups.

"Finding talent is not a problem as local [Russian] demand has crashed," Dokuchaev told MEE.

Dubai-based Russian tech executives who spoke with MEE said workers were now much more willing to negotiate and forgo extra forms of compensation such as an equity stake in order to secure a salary not denominated in roubles.

Dokuchaev said top-tier Russian programmers coming to Dubai were fetching $7-10k a month, tax free. And he is confident that, as more come, there will be a compounding affect.

"When an international founder sees the quality of work from Russian-speaking software and IT staff they become addicted," he said. 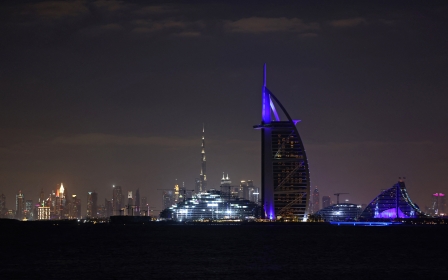 Russia-Ukraine war
Oligarchs can do business in Turkey if it's not illegal, says Cavusoglu