France has failed to defeat militants in the Sahel. Now, regional governments are turning to talks to resolve the conflict A soldier poses for a portrait during Operation Barkhane in Burkina Faso, on 13 November 2019 (Michele Cattani/AFP)
By
Mucahid Durmaz

On 16 February, during a two-day summit of leaders from west Africa in N'Djamena, Chad, French President Emmanuel Macron appeared via video link from inside the gilded Elysée palace to give France's view on the region's rampant insurgency.

After addressing heads of state from Mali, Burkina Faso, Chad, Niger and Mauritania, Macron, who recently increased the number of French troops in the Sahel to more than 5,000, told journalists the leaders had agreed that they could not negotiate with the commanders of two of the region's most notorious armed groups.

They "are enemies," he said, referring to Iyad Ag Ghali, the Tuareg leader of Ansar-ud Deen, and Amadou Koufa, the head of Katiba Macina, both Malians. "In no way whatsoever are they discussion partners."

He was reiterating a long-standing French position: "no negotiation with terrorists".

The French might have bombed a wedding party in Mali. And no one seems to care
Azad Essa
Read More »

Three days later, however, Moctar Ouane, Mali's interim prime minister, revealed that his government had created a body to lead talks with the militant groups, which have devastated areas in north and central Mali and elsewhere across the Sahel.

"More and more voices in Mali are calling for dialogue with our brothers who have joined radical groups," he said.

Violence gripped Mali in 2012, when Tuareg rebels and loosely aligned militant groups advanced towards the capital, Bamako, after taking swaths of the country's northern deserts.

Tuaregs in Mali have led periodic rebellions against the state since soon after it gained independence in 1960. But this latest uprising spiralled, leading to a brutal series of conflicts that eventually engulfed much of the Sahel.

A peace deal signed in 2015 by Mali's government and the rebel groups raised hopes temporarily, but it was never implemented fully. The militants quickly regrouped and expanded.

In 2017, the threat worsened. Ghali, France's most-wanted target in the conflict, united several militant groups, including Katiba Macina and al-Qaeda in the Islamic Maghreb (AQIM), under the banner of the Group for the Support of Islam and Muslims (GSIM).

GSIM has since overtaken its sworn enemy, the ISIS-affiliate group, to become the greatest threat in the Sahel and one of al-Qaeda's most active affiliates in the world.

The violence is worst in Mali, Burkina Faso and Niger, but threatens to spread into coastal countries such as Senegal, the Ivory Coast and Ghana.

Amid a breakdown of law and order and little-to-no state presence outside national capitals, more people are obtaining weapons and forming local armed groups.

Militants have exploited age-old tensions among various ethnic communities and tapped into deep-seated local grievances. These, along with the desperate poverty, rapidly changing climate and political corruption, have proven a deadly mix.

Almost 7,000 people died due to the fighting last year, according to the Armed Conflict and Location Event Data Project, while the UN declared recently that more than two million people have now been forced to flee their homes because of the conflict, a number that has quadrupled since 2019.

More than 14 million people in Mali, Niger and Burkina Faso are now in urgent need of humanitarian assistance.

A way out of the 'forever war'?

French forces have been fighting in the Sahel - alongside UN, US and European partners - for the past eight years. France launched Operation Serval in early 2013, following a UN Security Council Resolution and a request for military assistance from Mali. This was replaced by Operation Barkhane in 2014, an ongoing operation involving more than 5,000 personnel.

A year ago, continuing his focus on military solutions, Macron sent an additional 600 or so troops to the region and vowed to step up interventions in the "tri-borders" area linking Mali, Burkina Faso and Niger.

Despite some successes, however, including the killing of al-Qaeda chief AbdelMalek Droukdel and Ghali's right-hand man, Bah Ag Moussa, the violence is as bad as ever.

In his recent meeting with Sahel leaders, Macron said there would be no "immediate" drawdown of French troops, but made it clear that he wants a far smaller presence over time, with local forces taking more responsibility. Having spent billions of dollars and losing 55 soldiers to a conflict supposed to last "a matter of weeks," France is looking for a way out of its "forever war".

Many in the Sahel, even the secular elites whom France relied upon for decades, are now sceptical of French military motives. Opposition to the former coloniser's presence has been growing. Back home, a poll published last month found for the first time that a slim majority of French people viewed the military intervention in the Sahel unfavourably.

But a wholesale withdrawal could spell danger closer to home for France, a country traumatised by a string of violent attacks in recent years. Bernard Emié, director of the French foreign intelligence service, said in February that militants in Mali were weighing up attacks in Europe.

With his government's tone towards French Muslims increasingly hostile since last year's terror attacks, Macron may struggle to convince the French public of the need for closed-door negotiations with the militants.

In Mali, however, politicians, religious leaders and civil society groups have increasingly been calling for such talks, which they see as a political solution that would go hand-in-hand with French-led military operations.

Demands to negotiate with the militants are not a new development. In 2017, participants at Mali's Conference of National Understanding, a summit of representatives from government, armed groups and the opposition, said that authorities should engage with Ghali and Koufa.

In 2019, at talks called the National Inclusive Dialogue, which brought together some major domestic figures, including then-president Ibrahim Boubacar Keïta, the proposal was tabled again. Keïta publicly acknowledged for the first time last year that the government had made direct contact with Ghali and Koufa.

Keïta was ousted in August, but national talks in the aftermath of the coup again endorsed the idea of negotiating with the violent groups on both national and local levels.

For Boubacar Sangare, an independent researcher based in Mali's capital, Bamako, not all people who join militant groups are religious fanatics. Facing recurrent violence without state protection, some do it to protect their families and communities.

Leaders and foot soldiers have different motivations, Sangare told Middle East Eye, so the talks "must include the rank and file of the groups, to negotiate a new social contract... the state must first be accepted by the communities".

Echoing the position taken by authorities in Mali, Burkina Faso said for the first time in February that it too was open to the idea of negotiating with militants.

"If we want to end the security crisis, we will need to find paths and ways to talk with those responsible for terrorist attacks so that we are in peace," Prime Minister Christophe Dabire told parliament.

"The government understood that there were various dynamics [including lack of infrastructure and state presence] that exacerbated the violence, and they could be resolved through negotiation," Mahamoudou Savadogo, a researcher of Sahel violent extremism based in Ouagadougou, Burkina Faso's capital, told MEE.

Recent talks between local leaders in Djibo, a city in northern Burkina Faso controlled for months by al-Qaeda-linked militants, succeeded in reducing violence in the area, said Savadogo. "It allowed locals to return to their houses; even some schools opened."

Alex Thurston, an assistant professor of political science at the University of Cincinnati, believes that even a minimum of dialogue is worth exploring. "It could produce a short-term ceasefire that might lead to long-term political settlement," he told MEE.

For Sangare, "there is a difference between defeating terrorist groups and bringing peace". Algeria
France admits to torture and murder of Algerian fighter 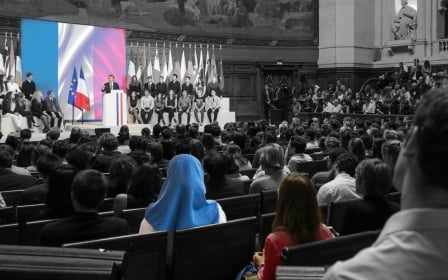