Although AQAP has denied responsibility for Friday's mosque attacks, analysts and locals question the veracity of the claim More than 140 people perished and hundreds more were injured from the well-planned and -executed attacks, carried out during noon prayers on the holiest day of the week.

An Interior Ministry official described the scene of Badr Mosque in northern Sanaa as “the most heinous I can remember”.

Further south in the capital, at al-Fashoush Mosque, witnesses had little to say, holding back tears, reciting prayers under their breath. They mostly stood silently as family members carried deceased relatives from the mosque’s rubble.

In both instances, two teams of two suicide bombers in apparent coordination with each other blind-sided the Houthi guards encircling the mosques.

Analyst and communication consultant Hisham al-Omeisy, who visited both mosques, concluded that the attacks happened as follows: one bomber from each pair at Badr and al-Fashoush detonated their explosives along the security perimeter, creating an opening for the second bombers to gain entry in the ensuing confusion and trigger their suicide belts amidst the dense crowds inside.

Another suicide bomber en route to the Houthis’ stronghold in Saadah Province reportedly botched his mission, detonating his explosives before reaching the target.

The Sanaa attacks vaguely reflect past al-Qaeda in the Arabian Peninsula (AQAP) tactics, in which explosives-laden vehicles were detonated at the gates of military compounds across southern provinces, creating an entry point for militants to storm the facilities and take advantage of the chaos and confusion to maximise damage and overtake the compounds.

Yet the timing (Friday prayers) and location (the interior of mosques) of the 21 March attacks raised questions about AQAP’s involvement.

Although AQAP militants consider their northern-based Zaydi Shiite counterparts heretics, Friday’s attacks crossed a red line, even by AQAP standards. In keeping with a carefully crafted narrative, AQAP has focused the majority of its attacks on domestic government and military targets, regional targets (mainly the House of Saud), and international targets (primarily aimed at US soil).

Michael Vickers, undersecretary of defense of intelligence, is only the latest in a long line of high-level US officials to label AQAP “the most dangerous of al-Qaeda’s organisations” during a speech at the Atlantic Council in Washington last week.

Yet both rhetorically and in practice AQAP has consciously avoided killing civilians, in order to preserve goodwill with Yemenis at large.

At the same time, AQAP has claimed responsibility for egregious attacks involving mass civilian carnage, including a December 2013 suicide car bomb at Yemen’s Defence Ministry that freed the way for armed AQAP militants to execute 52 people, mostly civilians, in the compound’s hospital.

Some witnesses said they knew beyond doubt who was behind the carnage.

Mohammed, a 42-year-old shop owner near the site of the al-Badr Mosque blast, said its magnitude cleared the shelves of his tiny store as if the bomb were next door.

“It’s al-Qaeda,” he said with confidence. “This kind of attack never happened when Saleh was president,” he added, referring to the longtime autocrat Ali Abdullah Saleh who relinquished office under a UN-backed Gulf Cooperation Council (GCC) accord to his then second-in-command Abd Rabbuh Mansour Hadi in the 2011 Arab uprisings.

“Ahmed Ali!” Mohammed exclaimed, tapping a faded decal of Saleh’s eldest son and ex-general of Yemen’s elite, US-trained Republican Guards who for the most part remain loyal to their former commander, despite Hadi disbanding the forces in 2013 in keeping with the GCC accord to build armed forces loyal to the state.

Ahmed Ali had long been groomed for the presidency until the Yemeni Spring dislodged his father’s regime from power. Amidst Yemen’s political and security limbo, however, prospects of another Saleh in the presidential palace are not out of the question.

Ali Abdullah arguably remains the most influential figure in Yemen, and should not be underestimated in his lofty aspirations, regardless of UN Security Council sanctions levied against him last November.

Yet AQAP denied involvement in the afternoon attacks, publishing in an online Twitter statement that mosques, markets and public areas in general are all off limits. A closer examination of AQAP’s record, though, contradicts the Twitter statement: in October 2014 an AQAP suicide bomber killed more than 50 Yemenis in Tahrir square where in August Houthi protestors had rallied against the lifting of fuel subsidies at the behest of Houthi leaders. This was despite the fact that more than $2 billion - or a fifth of government spending - went to subsidies in 2010, an economic death knell Houthis must now grapple with as Yemen’s moribund economy is predicted to collapse, absent the goodwill of an oil-rich regional benefactor.

The mood in Sanaa

It is difficult to imagine that the record number of deaths from suicide attacks in Sanaa during Friday prayers in two separate mosques will not be avenged by the Houthis.

Further compounding Houthi ire, scholar, imam and notable preacher Murtada al-Mohatwari died in the Friday attacks. And only two days earlier, unknown assailants shot dead prominent pro-Houthi activist Abdul Kareem al-Khaiwani. Carried out by two armed, unidentified individuals on a motorbike, the attack marked the first of its kind in months, and was supposedly carried out by AQAP, although this is not proven.

At the same time, as Houthis grieve and plot revenge - akin to the razing of their enemies in Amran Province and the forcible takeover of Sanaa in retaliation for the 2004-2010 state-sponsored wars to eliminate their northern Zaydi revivalist enclave - there is another large constituency in Sanaa that was oblivious to the Friday massacres.

Due to rampant power outages and illiteracy, large swathes of Sanaanis were surprised to hear about the Houthi mosque explosions.

Once informed, some smiled at the prospect of punishment meted out on their Houthi dictators. Others seemed disinterested and did not speak.

Finally, another broke the silence with a joke: “This is Yemen!” he said, slapping a friend on the shoulder as his mates burst into laughter, perhaps as a coping mechanism amidst the daily killings, kidnappings, beatings and occasional mass murders taking place amid political uncertainty.

Perhaps the most peculiar aspect of the mosque attacks was the online claim by a group claiming to be Yemen’s Islamic State affiliate. To date no proof has verified any such group in Yemen.

Fernando Carvajal, a doctoral candidate at the UK’s Exeter University who conducts research in Yemen, warned that: “Speculation tends to be difficult under circumstances similar to those Yemen is facing, and actors are less willing to make public claims of responsibility.”

“Too many people are relying on anonymous Twitter accounts for information when there is a lack of evidence to identify real culprits,” he added.

Rather than take for granted online claims of responsibility for events like Friday’s Houthi mosque attacks, Carvajal urges an examination of the political stakes at hand.

“The brazen nature of attacks in Sanaa and Saadah - Houthis’ centres of power - clearly illustrate Houthi weaknesses in securing these centres, a failure emanating from over-extending their forces,“ he said.

“AQAP and other actors are taking advantage of Houthi over-extension and preoccupation with the politics of negotiating a post-coup political order.” 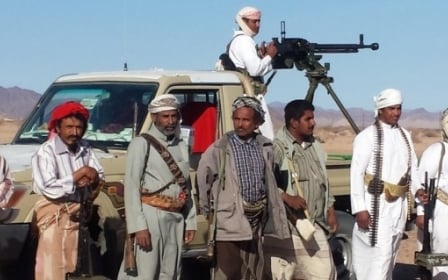