UN team will visit Syria's Shayrat airfield, which was targeted by US after Khan Sheikhun sarin gas attack UN investigators will this week travel to an air base in Syria that the United States and its allies say was used to launch a sarin gas attack on Khan Sheikhun, diplomats told AFP on Wednesday.

The trip to the Shayrat airfield comes just weeks before the release of a much-awaited report on the Khan Sheikhun attack that the West and a UN commission have said was carried out by President Bashar al-Assad's forces.

The team from the joint UN-OPCW (Organisation for the Prohibition of Chemical Weapons ) probe, known as the JIM, left on Monday for Damascus and is to go to the Shayrat airfield, said a Security Council diplomat, who asked not to be identified.

The United States in April launched a missile attack on Shayrat, charging that Syrian aircraft loaded with sarin gas had departed from that airfield to attack Khan Sheikhun.

At least 87 people, including more than 30 children, died in the gas attack on 4 April.

Syria's government has denied any involvement and maintains it no longer possesses chemical weapons after a 2013 agreement under which it pledged to surrender them.

The JIM visit to Shayrat will address criticism from Russia that the panel is biased because it declined to accept Syria's offer to visit the military base.

Western diplomats have expressed scepticism, however, suggesting the visit may be used by Damascus to try to bolster its assertion that the sarin gas was released by an accidental air strike on a storage depot.

The joint investigation of the United Nations and the OPCW was set up in 2015 by the Security Council to determine who is behind chemical weapons use in Syria.

The JIM has already determined that Syrian government forces were responsible for chlorine attacks on three villages in 2014 and 2015, and that Islamic State group militants used mustard gas in 2015.

The OPCW earlier this year presented a report confirming sarin gas was used in the attack at Khan Sheikhun, but did not assign blame, leaving that determination to the JIM. 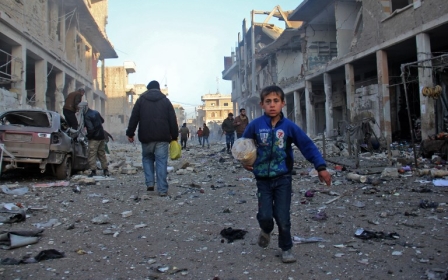 Syria War
'Anything to stop the destruction': Syrians on Turkey's Idlib incursion