Aid agencies and NGOs have condemned the move, which Yemenis say will have little impact on Houthi rebels 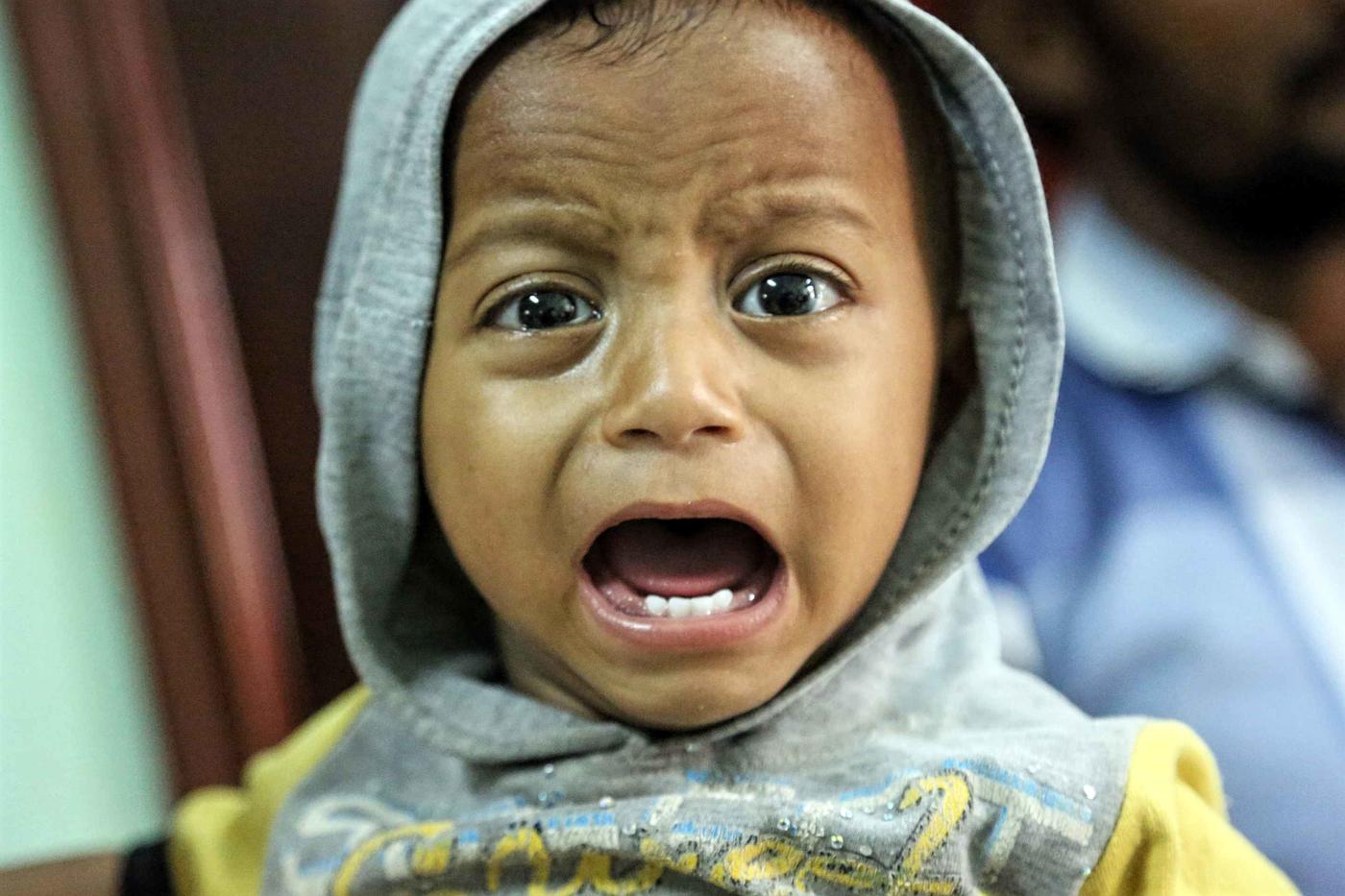 A Yemeni child, suspected of having cholera, at a hospital in Hodeidah on 5 November 2017 (AFP)
By
MEE correspondent

The Saudi-led blockade of Yemen, introduced earlier this week, has hit the country hard as it reels from a conflict which is now in its third bloody year.

Streets are full of people flocking to buy basic commodities as prices rise and traders fear that they will soon run out of imports.

Building labourer Najeeb Awadh, who is in his 50s, lives in Taiz city and is often out of work. He finds it tough to support his family, which includes six children. When he heard about the blockade, Awadh realised that they didn’t have enough money to pay for basics, so sold his wife's jewellery and rushed to the market.

“Food is more important than jewellery," he says. "Saudi Arabia has imposed a blockade on Yemen and we can’t find food in the markets anymore. Everyone is buying as much wheat as possible and putting it in barrels to keep for a long time. I bought three 50kg bags of wheat.”

Awadh also bought oil, fat, sugar and other basics, all at higher-than-usual prices. Some sellers even refused to sell goods, with supplies running low.

"Expensive food is better than nothing. We are worried that in the coming days, we cannot find food in the markets, so I bought commodities for expensive prices.”

First the missile, then the blockade

The blockade of Yemen was announced on Monday by state news agency SPA, which announced: "The Coalition Forces Command decided to temporarily close all Yemeni air, sea and land ports."

The move came after Saudi air defences intercepted a Houthi-fired missile near Riyadh airport on Saturday, which the coalition has described as a "dangerous escalation" by the Iran-allied Houthi.

But the impact has been felt on the streets of cities like Taiz. Jameel Hasan, a trader, rejects claims that markets are operating a monopoly on imports, hiking prices to exploit the blockade and puts the blame on rising fuel costs.

"Now we can only sell the commodities that we have in our stores. We cannot import anything, that is why some traders have had to stop to selling.

"If we sell our goods at what we sold them before then we will not be able to buy fresh supplies in future and definitely we will [go] bankrupt. I hope that Saudi allows commercial ships to dock in Yemen, otherwise we will face a real crisis."

On Monday, the United Nations Verification and Inspection Mechanism for Yemen (UNVIM), which is responsible for overseeing commercial shipping to the country, informed all commercial ships docked in Hudaida and Saleef to leave immediately due to the “current security situation".

The UN agency, which is based in Djibouti, said it had temporarily suspended until further notice the issue of fresh clearances for all ships heading to Yemen.

The port of Aden reopened on 8 November – but the prices and scarcity of goods remains the same. Meanwhile al-Hudaida port, which like the surrounding area is under Houthi control, remains shut.

The Saudi-led coalition said that despite the blockade, aid workers and humanitarian supplies would still be able to come and go. But on Tuesday the UN said that the move was already having an impact and called for the blockade to end.

"There were no flight clearances granted to our flights today," said UN spokesman Farhan Haq on Monday. "We expected to have two flights going and those are on hold for now."

Jens Laerke, a spokesman for the UN humanitarian office OCHA, told reporters in Geneva: "If these channels, these lifelines, are not kept open it is catastrophic for people who are already in what we have already called the world's worst humanitarian crisis.

"Fuel, food and medicine imports must continue to enter the country. This is an access problem of colossal dimensions."

The problem is acute. In Yemen, an estimted 20.7 million people in Yemen need some kind of humanitarian or protection support, with some 9.8 million in acute need of assistance, according to the UNOCHA.

An estimated 17 million people – 60 percent of the population - are food insecure while seven million people do not know where their next meal is coming from and are at risk of famine.

On Tuesday, the International Committee of the Red Cross (ICRC) urgently called for Yemen's air, sea and land borders to be kept open to allow vital humanitarian supplies to enter the country.

"Humanitarian supply lines to Yemen must remain open," said Robert Mardini, ICRC's regional director for the Near and Middle East, in a statement. "Food, medicine and other essential supplies are critical for the survival of 27 million Yemenis already weakened by a conflict now in its third year."

A Red Cross shipment of chlorine tablets, used for the prevention of cholera, failed to receive clearance at Yemen's northern border, Mardini said. Medical supplies, including 50,000 vials of insulin, were supposed to arrive next week.

"Insulin cannot wait at a shuttered border since it must be kept refrigerated. Without a quick solution to the closure, the humanitarian consequences will be dire," added Mardini.

Yemeni patients often seek treatment for dangerous conditions abroad because necessary medications are not available at home. Many medical professionals also left the country when war broke out.

A source in the health ministry in Sanaa, speaking to MEE on condition of anonymity amid fears of reprisals, said: "The escalation of Saudi blockade of Yemen will hamper the treatment of hundreds of patients. Some of them will die because of this blockade.”

The Saudi-led coalition has used this tactic before, closing Sanaa airport in August 2016. In a  joint statement at the time, 15 aid groups called for it to be reopened as the shutdown had effectively trapped millions of Yemenis and prevented the free movement of humanitarian and commercial goods.

Four months later, the UN estimated that the closure had prevented an estimated 20,000 people from accessing life-saving healthcare abroad.

But Sanaa airport is still closed.

The ministry source said: "During the last year, the health ministry and some NGOs called on the Saudi-led coalition to reopen Sanaa airport. But they did not help. Moreover, they tightened the blockade of Yemen.

But the blockade has backing from some quarters.

Fadhl al-Rabie, head of the Madar Strategic Studies Center in Aden, said: "It was clear that Iran still smuggles arms to the Houthis rebels. It is normal for Saudi to close the ports because this smuggling threatens Saudi Arabia and Gulf nations.

"Moreover, the coalition said that closing the ports is a temporary closure. There is the possibility that the coalition have information about the flow of arms to the Houthis during this period."

He added that the Saudi-led coalition had taken into account the needs of humanitarian services and that the closure would not be prolonged.

But for the likes of the unemployed Awadh, the lifting of the blockade cannot come soon enough. “It is a kind of collective punishment as all Yemenis are affected by it. I just hope that Saudi Arabia lifts it soon."