After Iranian media published images of homeless people living in graveyards near Tehran, the public took to social media to express outrage Homeless dwellers in a cemetery in the town of Shahriar, near Iran’s capital Tehran (Twitter)
By
MEE correspondent

Haunting images of people living in a graveyard just west of the Iranian capital Tehran have shocked the world and many ordinary Iranians.

The Iranian newspaper Shahrvand on Tuesday published images of drug addicts living in a cemetery in the town of Shahriar, 30 km west of Tehran.

Many members of the Iranian public took to social media to express outrage at the existence of such a situation in a country, which is among the top five when it comes to oil and gas reserves.

Iranian officials have ruthlessly clamped down on any form of dissent in the past, but social media was abuzz with criticism of the situation despite the threat of severe consequences.

Many of the comments were from users living in exile outside Iran.

Comments were not just limited to this particular situation but also questioned the foundations of the Islamic Republic and its ideals.

The tag being used by Iranian social media users is Gur Khaab or “grave sleeper” in English.

Iran’s president, Hassan Rouhani, lamented this situation where people lived in graves during a speech after the images were published. However the first act of authorities was to round up the drug addicts from the cemetery in Shahriar. No information was given about where they were taken to or what consequences they faced, the reformist-leaning Shahrvand newspaper reported on Wednesday.

Translation: Today after Shahrvand’s report about grave sleepers, cemetery workers chased them away. Will they be able to find a place or even a grave tonight?

Translation: Did you know that the Imam Khomeini Rescue Committee has a corporation that is involved in minerals and mineral-based industries? #grave sleeper

Translation: Haven’t they imprisoned the person who reported on the grave sleepers yet?

Translation: This problem was also taken care of by throwing the grave sleepers out of the cemetery. We have such officials that can solve problems in this manner.

Translation: [Former president Mahmoud] Ahmadinejad was supposed to make all Iranians home owners by the end of the 10th government’s term in 1392 (2013) but it looks like he has made many into living corpses.

Iranian officials have been quick to point to sanctions and their devastating effects on the country’s economic wellbeing and general populace. They often say that these sanctions are ploys by the nation’s enemies, led by the United States, intended to hurt the Iranian people.

After Saddam Hussein’s Iraq attacked Iran in 1980 the country was dragged into an eight-year-long war, which all but annihilated the country’s infrastructure and economy.

However critics say the country’s rulers have focused on financing various regional groups like Lebanon’s Hezbollah, Shia militias in Iraq and elsewhere to get the upper hand in a regional proxy war with rival Saudi Arabia instead of addressing domestic poverty.

The Islamic Revolutionary Guards Corps also controls most of the country’s economic activity through its Bonyads (foundations).

A stalled and inefficient economy means unemployment has been rampant for most of the past three decades. The official unemployment rate for 2016 was near 12 percent and youth unemployment as high as 26 percent.

Observers say the real figures are much higher. Low wages and spiralling costs of living have pushed a growing number of families below the poverty line.

Social ills of the Islamic republic

The images of drug addicts living in graves in a country blessed with plenty of natural mineral-based resources may have shocked the world, but Iranian professionals - including sociologists and psychologists – have constantly pointed to the Islamic Republic’s problem with drug-related issues.

Yet those very same drugs are very easy to find in Iran’s cities, and often cheaper than the price for a packet of cigarettes.

Iran has one of the highest numbers of drug addicts in the world, and executes hundreds of people each year for drug-related offences. Of the approximately 1,000 executions in Iran in 2015, 65 percent were for drug offences, according to UN Special Rapporteur Ahmed Shaheed.

According to sociologists and psychologists, severe social restrictions, which include a ban on the consumption of alcoholic beverages and mixing with members of the opposite gender, have also played a major role in pushing Iranians towards illegal narcotics.

“Today, the youth are bored with what they have and wish for things they haven’t got. This is rooted in Western culture and should be confronted with the use of cultural tools," said a supervisor at Tehran University’s Cultural Center. He added that lack of cultural facilities for students - not enough sports, depressing and overcrowded dormitories - is a significant reason for the prevalence of drug abuse.

The harsher punishments meted out to those caught consuming alcohol and the relative ease with which signs of narcotics consumption can be concealed during the early stages have also played a big role in pushing Iranians towards illegal narcotics.

Iranian authorities only admitted to a growing drug-addiction problem in society a few years ago but measures to curtail the issue are proving futile.

With the emergence of the images of drug-addicted grave dwellers, concerns have also started to grow that such images of human misery will be used by officials as election material for the approaching presidential elections scheduled for May 2017. 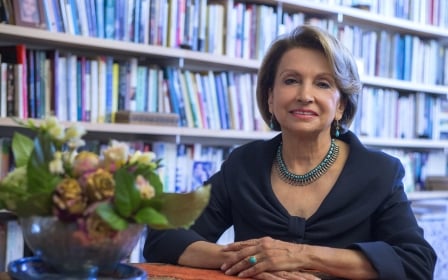 USA 2016
Why Iranians are quietly rooting for Trump
Mahan Abedin