From the turntable to Congress: A Muslim activist's fight to unseat Nancy Pelosi 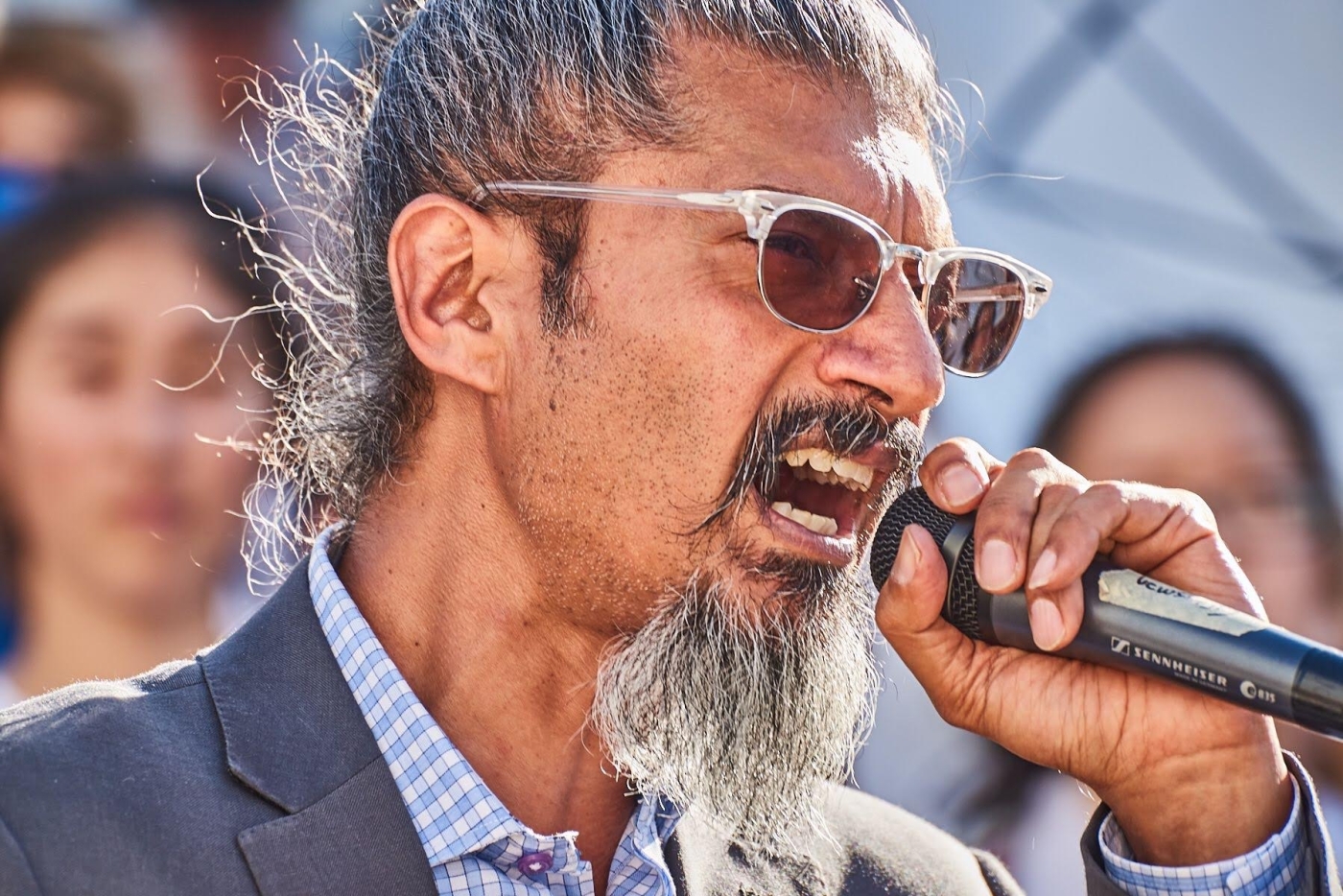 'It's like the millennials came of age and they made me possible,' Shahid Buttar says (Shahid For Change)
By
Sheren Khalel

Shahid Buttar wears many hats. He just never imagined politician would be among them.

Recognisable by his grey streaked hair tied in a top-bun, pointy goatee and stylish glasses, the 45-year-old made the drastic jump from activist to congressional candidate in a big way some two years ago.

Not one for half measures, his first run was against House Speaker Nancy Pelosi in 2018, jumping into the race just three months before San Francisco's primary vote.

At the time, Buttar - an artist, DJ, poet, civil rights lawyer, and grassroots organiser - didn't have a plan to win; he was simply making a statement.

"No one else stepped up," he told Middle East Eye.

"Nobody who I would have wanted to do it had the political courage to face the institutional behemoth that she is."

'I have a particular bone to pick with the three-letter agencies: the FBI, CIA and NSA. I have been fighting them for over a decade. And I fight them not because I'm a Muslim. I fight them because I'm a defender of the Constitution'

Since moving to the Bay area nearly two decades ago, the advocate and lawyer says he, like many of San Francisco's residents, has grown increasingly frustrated with the city's representation in Washington.

Pointing the finger squarely at Pelosi, he says he has a real chance of ending her 34-year reign in Congress should he come in second in Tuesday's California primary.

The California primary works a bit differently than other races. The top two candidates run against each other on the November ballot regardless of which party they belong to.

But in her decades of service, Pelosi has never faced another Democrat in California's 12th congressional District, and she's mopped the floor with every Republican and independent who has gone up against her.

In 2018, Lisa Remmer, the only Republican to run in the 12th District that year, beat Buttar for second place by a little over one thousand votes. But in November, Pelosi battered Remmer in a massive landslide, taking in 81 percent of the ballot.

Launching his campaign at the very start of the election season, Buttar says things are different this time around, and he has a real chance of coming in second.

Agatha Bacelar, another Democrat, is also running against Pelosi, but she hasn't raised anywhere near as much capital for her campaign as Buttar has. John Dennis, a Republican, is also in the race.

For generations, San Francisco has been known for its progressive politics, a vibrant LGBTQ community, a bohemian artist vibe and its long history of diverse inclusion.

But the city has changed drastically over the years. With more people moving to the coastal hub, gentrification has taken root, pushing out many of the artists, musicians and other middle-income residents that San Francisco had been known for.

The failure of our federal policy apparatus to keep people in their homes is a big part of why I’m running for Congress.

Today’s housing crisis in the bay area & beyond was entirely preventable. The policymakers who let it happen should be held accountable. #ShahidVsPelosi https://t.co/RODzXwDTAf

Pelosi has done little to fix the housing problem, Buttar says. Between her opposition to Medicare for All, the Green New Deal, the "abolish ICE" movement, and the general divide between herself and the growing faction of progressives in Washington, Pelosi is seen as being out of touch with her district.

Buttar, on the other hand, says he sees himself as the living, breathing embodiment of the city.

"I have the skill set and I happen to freakishly have a bunch of different pieces of my background that fit together almost like a puzzle to crack her coalition."

Buttar says his offbeat style and unique identity is "an asset" in a district like San Francisco.

Anyone who does not think his style and manner is "congressional enough" to win an election "just doesn't understand the city I represent", he says.

"In fact, it's a superpower here. San Francisco is a proud counter-cultural capital of the country."

Spending his free time at open mic poetry readings, his 2008 album on Spotify features songs such as Baghdad Blues, a catchy tune that criticises the US 2003 invasion of Iraq.

A quick search online brings up a variety of Buttar's unique experiences, such as the time he emceed at Philadelphia's 2016 PEX Summer Festival, where he performed his song "From Ferguson to Jerusalem" from inside a neon-lit DJ booth fashioned out of a lorry truck's front cab. There's also his blog from the many times he attended Burning Man, a massive counter-culture festival that takes place in the rural Nevada desert every year.

On a more serious note are videos of him giving speeches at law schools, universities, and legislative hearings across the country, including a 2017 Tedx Talk on government surveillance.

The son of Ahmadiyya Muslims who moved to the UK in the 1970s, fleeing persecution in Pakistan, Buttar moved to Rosebud, Missouri (population: 409) when he was two, growing-up brown and Muslim in rural middle-America.

The obstacles he faced as a child allowed him to empathise with the obstacles and persecution of others, he says, seeing them as all interconnected struggles.

"Rights and marginalisation are intersectional, full stop, period; and if you don't look at issues through that lens, it's kind of like trying to engage in a policy fight with one hand behind your back," he said.

Then came the millennials

But it wasn't until he moved to Chicago for his undergraduate studies that he really began to delve into politics in a meaningful way.

"Where I really ultimately got radicalised was as a poet in the spoken-word open-mic community in Chicago in the early 90s," Buttar said.

Buttar would come to open mic sessions and hear people from all walks of life expressing their fears, hopes and desires.

"You can't hear your neighbours and not come to empathise with them," Buttar said.

'It wasn't Bernie Sanders. It wasn't the 2016 election. It wasn't AOC [Alexandria Ocasio-Cortez]. The earthquake that came grew out of the millennials'

Still, as his political engagement grew, his beliefs were so outside the mainstream political arena at the time that he never imagined he would, one day, be able to gather enough support to push for the values he wished he saw in American politics.

Then came the millennials.

"After 20 years of having done the right thing and rendering myself entirely unelectable under yesterday's paradigm - suddenly an earthquake came," Buttar said. "It wasn't Bernie Sanders. It wasn't the 2016 election. It wasn't AOC [Congresswoman Alexandria Ocasio-Cortez]. The earthquake that came grew out of the millennials."

"It's like the millennials came of age and they made me possible."

"Basically now we're coming for the country at the ballot box, because that generation has now matured. And they have another generation behind them. And the boomers are dying off and don't have the numbers to fight us anymore.

"So we are coming for the system. It's a generational earthquake beyond anyone," he continued.

Buttar says he sees that movement in Congress already - from AOC's Green New Deal to Ilhan Omar's fight to overhaul US foreign policy - where young freshman lawmakers are not only calling for change, but also skipping the waiting period and jumping straight into policy.

Like his progressive cohorts, Buttar has big ideas and, through his advocacy work in the past, has the experience to follow through, he said.

"There are reform proposals that have been developed by the public interest community for decades, but we haven't had policymakers with the stomach to break through," Buttar said.

His first big project, if elected, will be taking on government transparency by making Freedom of Information Act (FOIA) and classification reforms as well as ending government surveillance of citizens.

"I'm very eager to ensure that any document that is deemed classified, the executive branch faces an affirmative burden to justify the classification so that there is a burden of proof and basically a right to challenge," he said.

"I have a particular bone to pick with the three-letter agencies: the FBI, CIA and NSA," Buttar continued. "I have been fighting them for over a decade. And I fight them not because I'm a Muslim. I fight them because I'm a defender of the Constitution." Buttar said he believes he already represents San Francisco. "I just don't represent it formally - yet".

Buttar, like many of his progressive colleagues, has rejected money from corporate interest groups, basing his fundraising on small donations from voters. In the month of January, he raised $60,000 from around 2,000 donors.

While he has no hopes to match the $5.9m Pelosi raised in 2019, he is convinced his campaign can pull through without the same resources.

"We are breaking our benchmarks. We will cross half-a-million by the primary. The low end of our budget started at 300,000, so we're well over," he explained.

"We are closing in on 11,000 donors at the moment, which for an insurgent congressional campaign challenging the party leader is frankly - it's astounding," he said, enthusiasm clear in his voice.

The number of small donations from regular constituents is a prime example of how his campaign has touched the heart of San Francisco, he said.

"I think it's clear. I don't just represent San Francisco's values. I represent our city's character too. And I think the city is proud of that." US Elections 2020
Democratic debate: Candidates weigh in on Israeli-Palestinian conflict