Soaring prices take away from Eid joy in Egypt CAIRO – Like every year, Naglaa Fawzi took her two young children to a nearby mall to buy them new clothes for Eid al-Fitr, which marks the end of the fasting month of Ramadan.

But her hopes faded away because of the skyrocketing prices.

Prices have soared in Egypt in recent months, as authorities have devaluated the pound against the US dollar.

According to the Cairo Chamber of Commerce, prices of clothes have risen by 20 to 30 percent.

"The soaring prices have prompted many families not to buy clothes until August when shops offer real discounts," said Yehia Zananeri, the deputy head of the chamber's ready-made clothes department.

Inflation in Egypt has been climbing since the Egyptian government slashed energy subsidies last year.

Annual inflation was 11.5 percent in June, according to the official statistics agency CAPMAS. It was 13.5 and 11 percent in May and April.

The World Bank expects that inflation will remain at around 10 percent through the 2016-2017 fiscal year.

"I went to several shops to get cheap clothes for my kids, but I could not," said Kamal Ahmed, a father of three.

Determined to draw a smile on the faces of his kids, Ahmed went to a popular marketplace in central Cairo to get new clothes at affordable prices.

"Though their quality is not high, the clothes will make my children happy," he said.

The Egyptian economy has been hard hit by four years of political turmoil since a 2011 uprising swept former president Hosni Mubarak from power.

Egypt has received billions of dollars in aid from its Gulf allies since the military unseated democratically elected President Mohamed Morsi in 2013.

According to the planning ministry, Egypt's economy grew at 3 percent in the third quarter of the 2014-2015 fiscal year, which ended in March, compared to 2.5 percent in the same period the previous year.

For Naglaa, this economic recovery is not yet felt by people on the street.

"Our life has not improved," Naglaa said. "We just need to lead a respectable life for ourselves and our children." 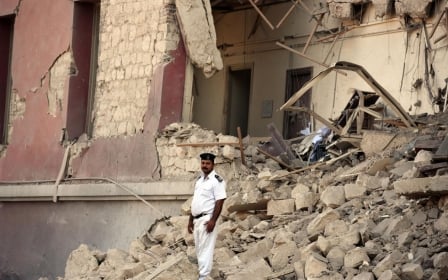