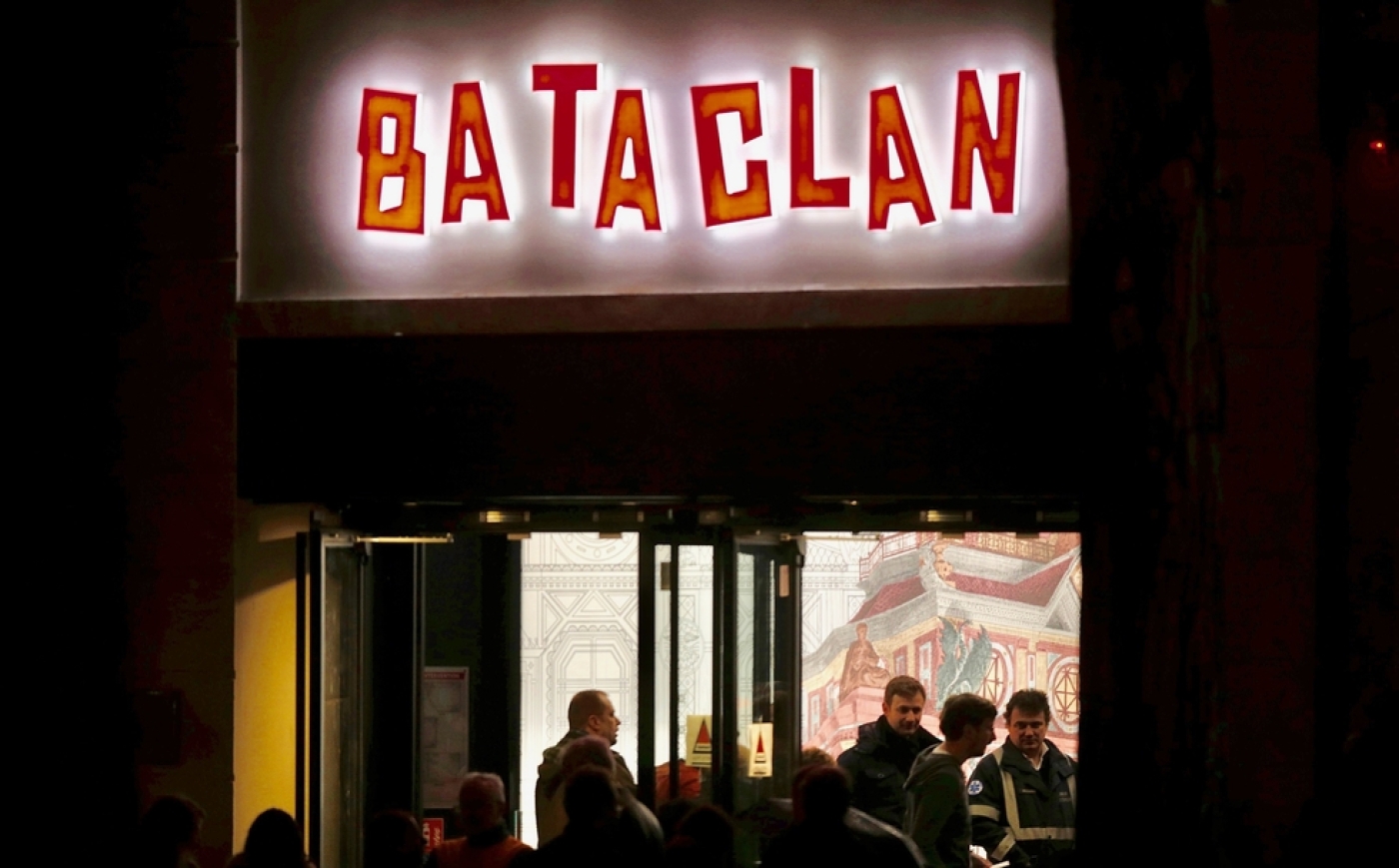 People arrive on Saturday at Bataclan concert hall in Paris, France, where rock star Sting will perform reopening concert one year after deadly Paris attacks (AFP)
By
MEE and agencies

"We will not forget them," the British singer told the crowd in French after a minute's silence for the victims.

"Tonight we have two tasks to achieve: first to remember those who lost their lives in the attack, and then to celebrate life and music in this historic place."

He began the emotionally charged concert with his song Fragile, singing: "Nothing comes from violence and nothing will."

Many in the crowd at the popular rock venue where militants armed with guns and suicide bombs struck on 13 November 2015 wept during the first song.

But Sting, appearing on stage with French-Lebanese trumpet star Ibrahim Maalouf, then got the place on its feet clapping and stamping with Message In a Bottle.

Scores of survivors of the Bataclan assault attended the concert, the dominant event in a weekend of otherwise low-key commemorations.

Georges Salines, who lost his 28-year-old daughter Lola at the Bataclan, said the concert was "almost a taking back of the space for music and fun from the forces of death".

Salines, who heads the group November 13: Fraternity and Truth, will be among between 250 and 300 survivors and victims' families present.

The wave of Islamic State (IS) attacks profoundly shook France, but Prime Minister Manuel Valls vowed on Saturday that "Islamist terrorism" would be defeated once and for all.

"Terrorism will strike us again," warned Valls in a statement.

"But we have in ourselves all the resources to resist and all the strength to beat it," the prime minister added, as flowers and candles were left outside the Bataclan amid tight security.

On Sunday, the actual anniversary of the attacks, French President Francois Hollande and Paris Mayor Anne Hidalgo will unveil plaques to the victims outside the Bataclan, the national stadium where the carnage began, and the bars and restaurants the gunmen targeted during the night of horror.

One year on, nine people out of the about 400 wounded in the rampage are still in hospital.

France remains under tight security after a string of attacks that have spurred a security crackdown, while terrorism and the place of Islam have also emerged as key themes six months before French presidential elections.

Sting's hour-long concert to reopen the legendary theatre sold out within minutes of going on sale Tuesday.

"It is important that [the Bataclan] starts again, that it remains a concert venue. We need to go back to normal life," the 65-year-old performer told French media.

While reopening the doors will mean reliving painful memories for many, Jules Frutos, who has co-run the venue for the last 12 years, told AFP: "We had to go on after such horror and not leave a mausoleum, a tomb."

Families, psychologists and counsellors will be on hand to support survivors, organisers said.

Frutos said he rang Sting himself to ask him to play after the British singer told a journalist he was keen to help, having last appeared at the Bataclan with The Police in 1979.

He admitting that the weight of the occasion had been too much for many top French acts.

A survivor of the massacre who wished to remain anonymous told Billboard that he was glad Sting would be the opening act. “At least he stepped up. Others were all saying, ‘We’ll play Paris,’ but no one had the guts to do it,” he said.

In re-opening the Bataclan, we have two important tasks to reconcile. First, to remember and… https://t.co/lqaCiKUsu8

The singer said he will donate the proceeds to two charities set up to help survivors.

The Bataclan has been a temple of rock music since the 1970s, drawing stars such as Lou Reed, Genesis, The Clash, The Cure and Prince.

Since the attacks, the hall's devastated interior has been completely replaced, from the seats to the floorboards, with identical fittings.

"We wanted to change everything so nothing would remain of that terrible night," said Langlet, who told reporters "several million euros" has been spent on refurbishing the building in identical style without losing the venue's intimate atmosphere.

"We decide to change everything so nothing would change," he added.

Survivors, including members of the US group Eagles of Death Metal who were on stage when the gunmen burst in, will gather outside the venue again on Sunday morning when Hollande and Hidalgo unveil a plaque inscribed with the names of the victims. No speeches are expected.

Members of the band were turned away from the venue's reopening show on Saturday over controversial remarks by their lead singer.

"They came, I threw them out - there are things you can't forgive," Bataclan co-director Jules Frutos told AFP, as Sting was wrapping up the emotional reopening show.

Eagles frontman Jesse Hughes, one of the two band members denied entry to the Sting concert, caused dismay in France earlier this year by suggesting Muslim staff at the Bataclan were involved in the gun and suicide bomb attack there.

"For the victims, it's their day of mourning, their day to come together," said Caroline Langlade, president of the Life for Paris association.

Several small-scale gatherings and tributes are planned across the French capital to mark the anniversary.

The Bataclan will remain dark on the anniversary itself, before opening again on Wednesday for a series of concerts by British singer Pete Doherty, Senegalese star Youssou N'Dour and British '60s legend Marianne Faithfull.