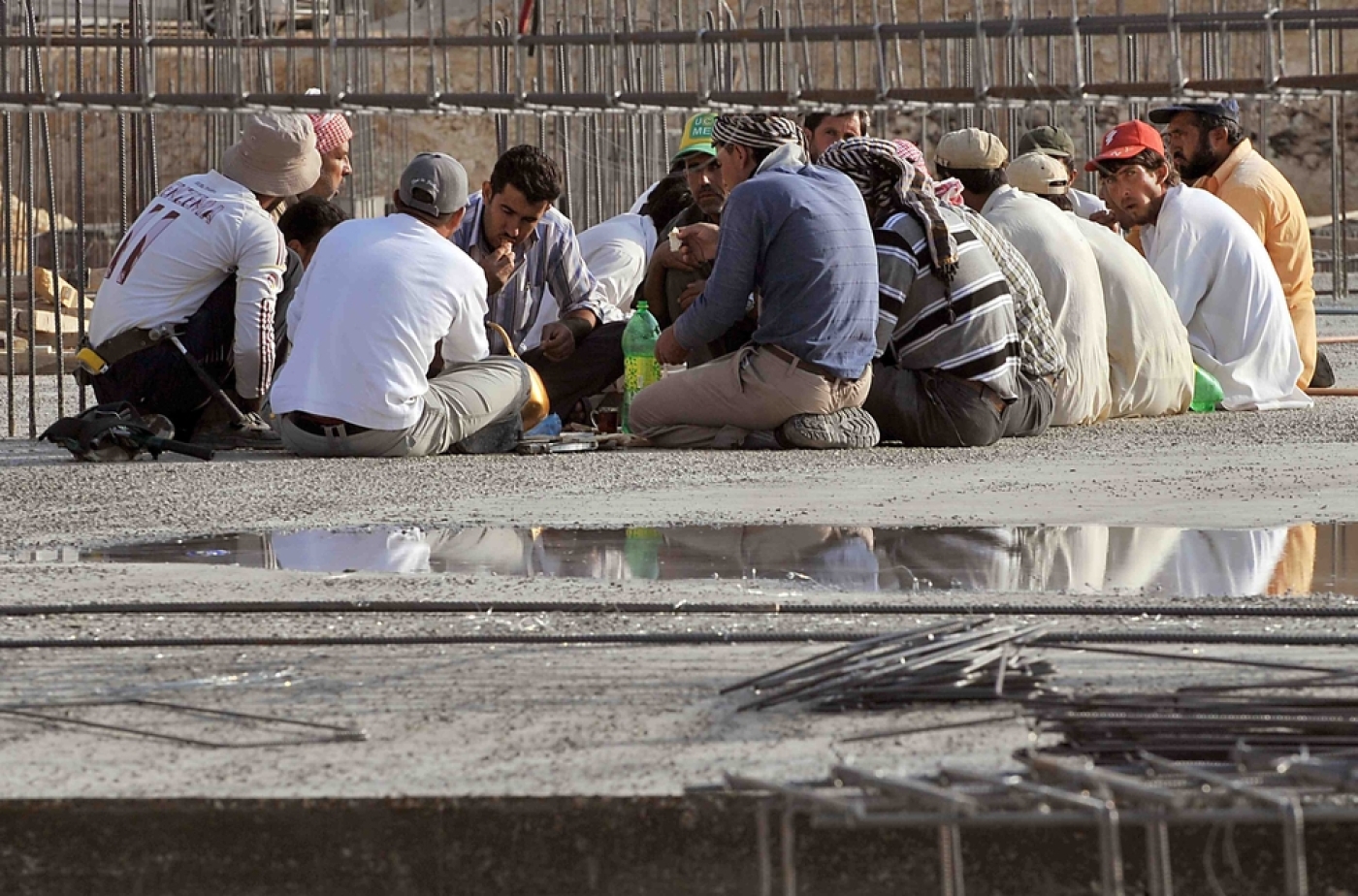 Workers at a construction company in Saudi Arabia have issued an urgent plea for help, saying they are trapped and facing starvation because their employer is refusing to pay salaries or grant them permission to leave the country.

Foreign staff at building firm United Seemac told MEE the company's 500-plus employees have not been paid in months and that both the Saudi government and their embassies have done little to solve their increasingly desperate crisis.

A database compiled by a Pakistani employee and seen by MEE revealed that workers have not been paid for a minimum of five months, while some have gone 19 months without receiving wages.

One Pakistani worker, who has not been paid in 10 months, said no one is helping them because they do not work for one of the kingdom’s larger companies.

“Nobody knows the situation for employees working at small companies,” said Mohammed Barr, who has been working as an engineer at the company for two years.

“All the attention is on the big companies – it’s easy to ignore us because we are not so many people."

Saudi Arabia is in financial crisis because of a collapse in oil revenues that account for 80 percent of government income. In 2015 the government posted a record $98bn budget deficit, causing many of the kingdom’s construction projects to be suspended or cancelled.

Big companies, including the Bin Ladin Group and Saudi Oger, have attracted significant media attention as tens of thousands of foreign workers were left destitute and stranded, unpaid for months before being laid off.

Officials from India, Pakistan and the Philippines – three countries that together have at least 30,000 citizens stranded in Saudi Arabia – have said they are working to solve problems faced by Bin Ladin and Oger employees, but workers at smaller firms including United Seemac say they are receiving little help.

“Bin Ladin and Oger have a lot of power, so that’s why the governments and embassies know about their workers,” Barr said. “We might only be 500 people but that is not all we are. Our families rely on our money, so this is a problem for 500 families.

“Nobody knows about companies like ours. Nobody wants to take any action to help us.”

United Seemac, a construction company that mostly does roadwork for the government, is based in Riyadh and has offices all over Saudi Arabia.

Its owner, Mohammed Owaideh, declined to answer any questions in several telephone calls with MEE.

However, the company’s general manager – known only as Abu Mohammed – told MEE that it is unable to pay employees because the government has failed to pay them for completed contract work.

“The government is not paying us,” he said via telephone from Riyadh. “When we get our money from the government we are going to give the people their money. One by one everyone will get paid.”

Abu Mohammed would not tell MEE how much money United Seemac is owed by the government or how much money is owed to employees, and said he “doesn’t know” when workers might receive their unpaid salaries.

United Seemac employee Barr, who compiled the database of unpaid salaries at the company, said it owes more than $2.4m to its staff.

Saudi authorities have repeatedly said they are trying to solve the problem of unpaid workers. King Salman has ordered companies including Saudi Oger to pay staff the money they are owed, although there has been little official comment about the issue of unpaid government contracts.

For United Seemac’s foreign staff, the situation has grown increasingly serious, with workers unable to buy food or send money home to families who rely on their remittances.

MEE has seen footage of United Seemac accommodation in Riyadh that is dirty and so overcrowded that people are forced to sleep outside with no air conditioning amid scorching summer temperatures.

As well as facing financial strife, employees told MEE that United Seemac is refusing to allow foreign staff to leave the country or transfer to another employer.

The company is able to do this because Saudi Arabia’s sponsorship system – known as kafala – must grant permission before they can take a new job or return home.

One United Seemac employee told MEE these rules have allowed the company to act cruelly toward him during a recent personal tragedy.

Sajjad Binalis, 33, from Islamabad, has worked as a surveyor for United Seemac since last June, but for the past 11 months the company has not paid him his $1,333 monthly salary.

On Wednesday, Binalis said, his mother died unexpectedly and when he asked company bosses if he could travel to Pakistan for the funeral, they refused.

“I said I needed to go to Pakistan for an emergency because my mother died,” he said. “But the general manager [Abu Mohammed] said I was only allowed to travel after Eid.”

The decision meant that Binalis would only be allowed to travel to Pakistan after Eid al-Adha, which is due to take place around 10 and 11 September.

As a result, he missed his mother’s funeral.

General Manager Abu Mohammed did not respond to questions about why he refused to allow Binalis to leave Saudi Arabia to attend the funeral.

For other United Seemac employees, the kafala rules have also forced them to turn down job opportunities that offered possible routes out of their misery.

Pakistani engineer Barr said he was offered a job at another company in Saudi Arabia, but United Seemac will not return his passport and grant him permission to move on. This is despite Saudi law being changed in 2015 to prohibit employers from confiscating workers' passports.

“We just want to be paid and then allowed to leave, either for another job here or to return home to our countries,” Barr said.

He added that United Seemac has not renewed medical insurance for workers after it expired in February, which means employees can’t access health care in the kingdom.

“They promised they would renew medical insurance in August, but nobody has the card,” he said.

Kamran Bhatti, who has worked as a designer for five years at United Seemac, said the company has not renewed staff residence permits, known locally as iqama.

Bhatti is based in the southwest town of Khamis Mushait and said he has not been paid in 13 months. His residence permit expired on 3 April, while most of the workers' permits expired last year and the company has not paid to have them renewed.

In July, Bhatti said police raided company accommodation in Khamis Mushait, arresting him and 10 other United Seemac employees, who were all either from Pakistan, India or Yemen.

He said they were taken to a local prison, where they were held for seven days in poor conditions - prison guards told them to drink from the toilet, they had no mattresses and were kept in a small cell with no air conditioning.

After one week, the group was released because police accepted - after having initially rejected - evidence that they had a pending complaint with the Saudi Labour Court over their treatment by United Seemac.

Saudi law stipulates that a foreign worker cannot be detained over an expired residency permit if they have filed a complaint with the Labour Court.

The Labour Court complaint was filed in January, but it is still pending and the foreign workers have now turned to their own governments for help.

In a series of videos sent to MEE, workers from Pakistan and India issued pleas for their governments to step in and sort out the situation with both the companies and Saudi authorities.

Pakistani Mohammed Shafiq, who has not been paid in 10 months, said: “I request [Pakistani Prime Minister] Mohammed Nawaz Sharif to solve our issue immediately because this [situation] is causing us a lot of concern.”

An Indian worker from Uttar Pradesh who did not give his name said: “I request [Indian Foreign Minister] Sushma Swaraj and [Indian Prime Minister] Narendra Modi to ensure that our salaries are paid and that we are taken out of here.”

Both Indian and Pakistani officials have visited Saudi Arabia and say they are working to solve the issue of unpaid foreign workers – but attention has continued to focus on the larger companies of Bin Ladin and Saudi Oger.

On Sunday, Pakistani United Seemac employees went to their embassy in Riyadh and asked for help. Embassy staff, the employees said, phoned United Seemac owner Owaideh, who promised to pay five workers by the end of this week.

Barr, who is leading the workers in Riyadh, said he no longer believes Owaideh’s promises.

“We know he is lying,” Barr said. “He’s been saying the same thing for the past seven months.”

In a situation where United Seemac employees no longer believe they will be paid anytime soon, Barr said the situation could quickly escalate if authorities take no action against the company.

“If United Seemac is not being paid for government work they should close the company and pay the employees,” he said.

“People are under physical and mental pressure. If nothing is done soon the workers will start protesting and taking the fight to the government.

“Our families don’t have money for food or to send children to school. I am worried they will starve to death or kill themselves.”

Mohammed Barr's name has been changed at the request of the interviewee.