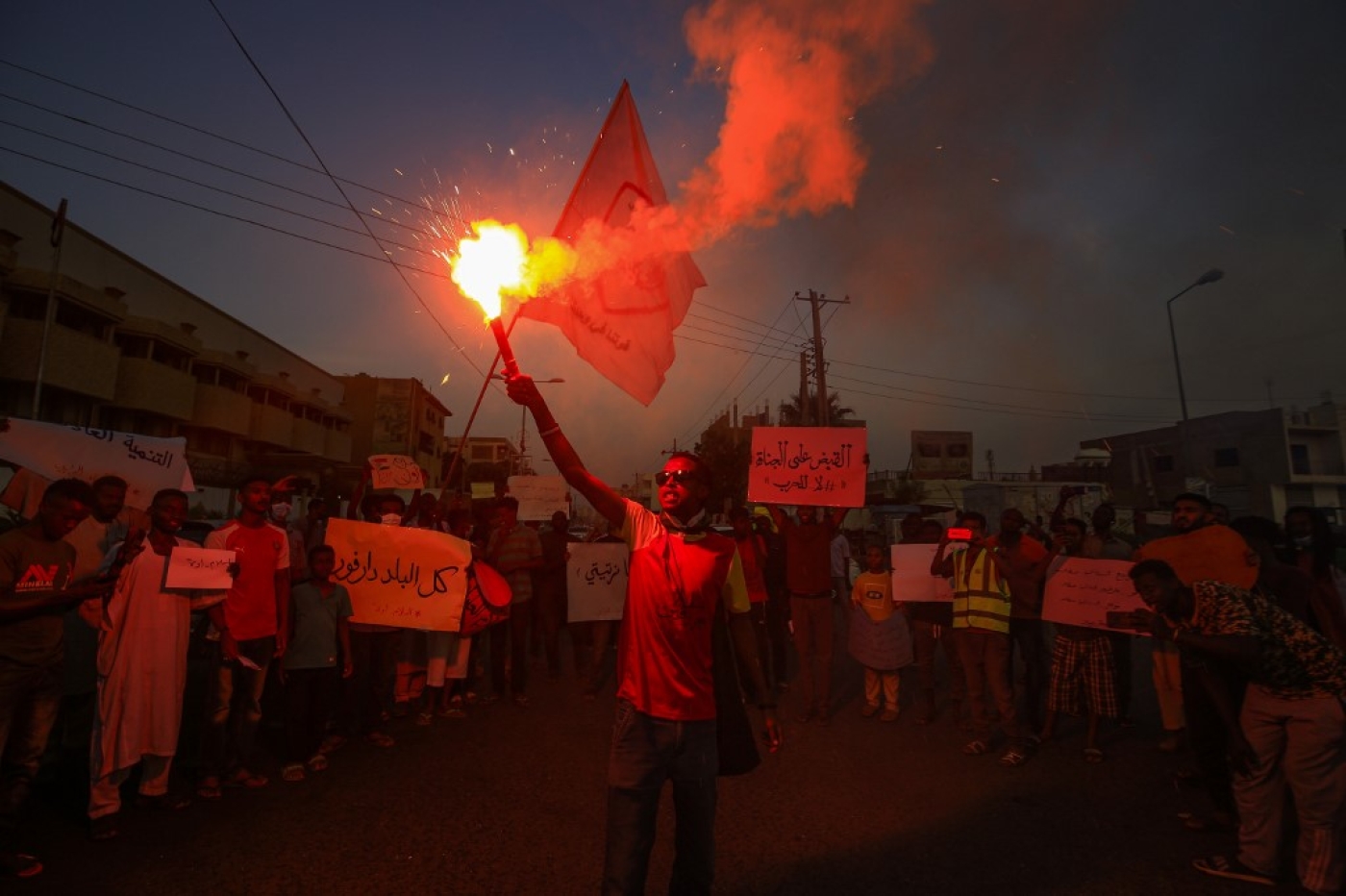 Protesters in the Sudanese capital Khartoum showing solidarity with the people of Darfur, 4 July 2020 (AFP)
By
Mohammed Amin
in
Khartoum

Residents of the troubled Darfur region of Sudan say they are reliving the painful memories of the deadly conflicts of the early 2000s as attacks by armed groups and government dispersals of protests have left dozens dead and thousands displaced.

The southwestern region has witnessed a wave of violence that led to the death of at least 100 civilians in July, despite a short lull in the unrest after the 2019 Sudanese revolution that ousted longtime president Omar al-Bashir.

Bashir is in jail and wanted by the International Criminal Court on charges of overseeing crimes against humanity over his scorched-earth campaign against rebels in Darfur more than a decade ago.

As the July-November planting season has started, some displaced residents have returned to their homes, reassured by a peace deal sponsored by the government two months ago.

Their return, however, has triggered a fresh conflict over agricultural land with those who had taken over the abandoned villages.

Killings, dispersals of sit-ins and other forms of aggression against civilians have hit various parts of the region, particularly in Masteri town in Western Darfur, where attacks by 500 unidentified militia members killed more than 60 people within a few hours on 25 July.

According to the UN Office for Coordination of the Humanitarian Affairs (OCHA), the attacks have led to the unprecedented displacement of more than 10,000 in Mestri, which is mainly home to farmers from non-Arab minority groups.

On Friday, Save the Children announced that it had to close its facilities in Darfur providing health services and food for 14,000 children after the Masteri attack. The organisation said that five children were among the dead. Another attack the previous day killed at least 20 civilians, including children, as they returned to their fields in South Darfur for the first time in years.

Additionally, more than a dozen protesters were killed in North Darfur on 13 July after armed groups attacked their sit-in that demanded better security conditions and an end to what they described as government-sanctioned attacks.

Hawa Adam - who is from Masteri but has been displaced in El Geneina city, the capital of the West Darfur state - told MEE that two members of her family had been killed in the attack carried out by government-aligned militias.

"The Arab militias killed a lot of people, and we were forced to walk for two days until we reached El Geneina," she told MEE in a phone interview.

"What happened has reminded me of 2004, when we were forced to leave our homes due to attacks by the Janjaweed," she said, referring to the Bashir-backed paramilitary group responsible for much of the violence against people in Darfur in the early part of the century.

"I just returned to my village last year as the situation relaxed after the revolution, but the same aggression is happening again now."

Adam Ishag, a displaced person from Fata Barno camp, where militias recently attacked a sit-in held by internally displaced people (IDPs), said that he returned to the camp but the situation is tense and unpredictable.

"The peaceful 2019 revolution has left a positive impact on the people of Darfur, who were hoping to renounce violence," he told MEE from Fata Barno camp.

"But the militias and the ignorance from the central government in Khartoum may force the people to carry the weapons again."

The conflict in Darfur broke out in 2003, when mainly non-Arab African tribes, complaining of marginalisation, took up arms against Sudanese government forces under Bashir.

The UN estimates that 2.8 million people in Darfur might require food aid if fighting continues to disrupt the current agricultural season. For Darfur's displaced, the promise of a new Sudan is distant
Read More »

Earlier in July, three farmers were killed by gunmen in Central Darfur, prompting protests by thousands of mostly displaced people across the region to demand an end to the unrest.

The civil-military government that replaced Bashir has raised hopes of peace in Darfur, particularly with the deal signed in January with nine groups, including some from the region.

The preliminary deal would grant rebels 25 percent representation in the national government and 40 percent in Darfur.

Arab militias, however, remain present and have control over the agricultural lands that they seized.

In the wake of the violence, Sudanese Prime Minister Abdallah Hamdok announced that his government will deploy a joint force to protect civilians in the entire region.

A UN source told MEE that a peacekeeping mission assigned by Hamdok to be deployed in Sudan had sent a technical team to assess the situation on the ground and begin the first steps towards the deployment of a mission to protect civilians.

"Following the directives of a special representative of the secretary-general, a small start-up team will be deployed in Khartoum to take the recommendations of the planning team forward," the source, who asked to remain anonymous, said.

"We are hoping that the new mission, which will be deployed within this positive atmosphere of political change and the good cooperation of the transitional government, will play a decisive role in protecting civilians and monitoring of human rights violations."

While the transitional government has vowed to end the conflict and is sponsoring talks to reach a final peace deal, Sudanese rebels have condemned the recent attacks as reminiscent of the practices of the old administration.

The Sudan Liberation Movement (SLM) led by Abdul Wahid Alnur has strongly criticised the transitional government, saying that the mentality in Khartoum of dealing with Darfur has not changed after the revolution. "The people of Darfur, especially the IDPs and refugees, do not see the impact of the revolution on their normal lives as the old regime and its militias are still dominating the situation in the region, killing people, burning villages, raping women and even detaining the protesters," SLM spokesman Abdul Rahman Alnair said.

A leading member in the SLM, Mohamed Hassan Haroun, told MEE that Bashir supporters were attempting to sabotage the peace process that is due to lead to a final peace deal in Juba through conspiracies and instigation of tribal clashes.

"The peace process that is about to conclude is very worrying for the agents of the old regime and the warlords of the region, so this is why they are creating a lot of problems in order to obstruct the process," he said.

Sudanese scholar Mohamed Badawi attributed the escalation to a conflict of interests between the active players in the region including the militias, pro-Bashir agents and the other components of the transitional government. 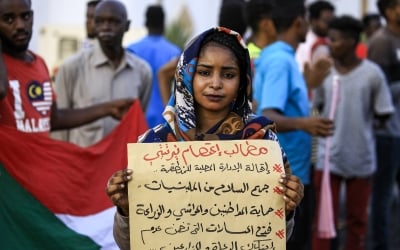 Badawi, a researcher at the African Center for Justice and Peace Studies, argued that the active players are worried about political changes in the region including the appointment of civilian rulers and mounting civilian protests.

"It is a sort of rebalancing the power of the warlords and the militias in the region," he told MEE.

"The grassroots, including the IDPs and other protesters, have escalated their demands and begun organising themselves in sit-ins and other forms of civil resistance," he said.

"The elites of Khartoum and Darfur are worried about the movements and demands of the grassroots, and this may be why they are turning a blind eye to the violations committed by the militias."