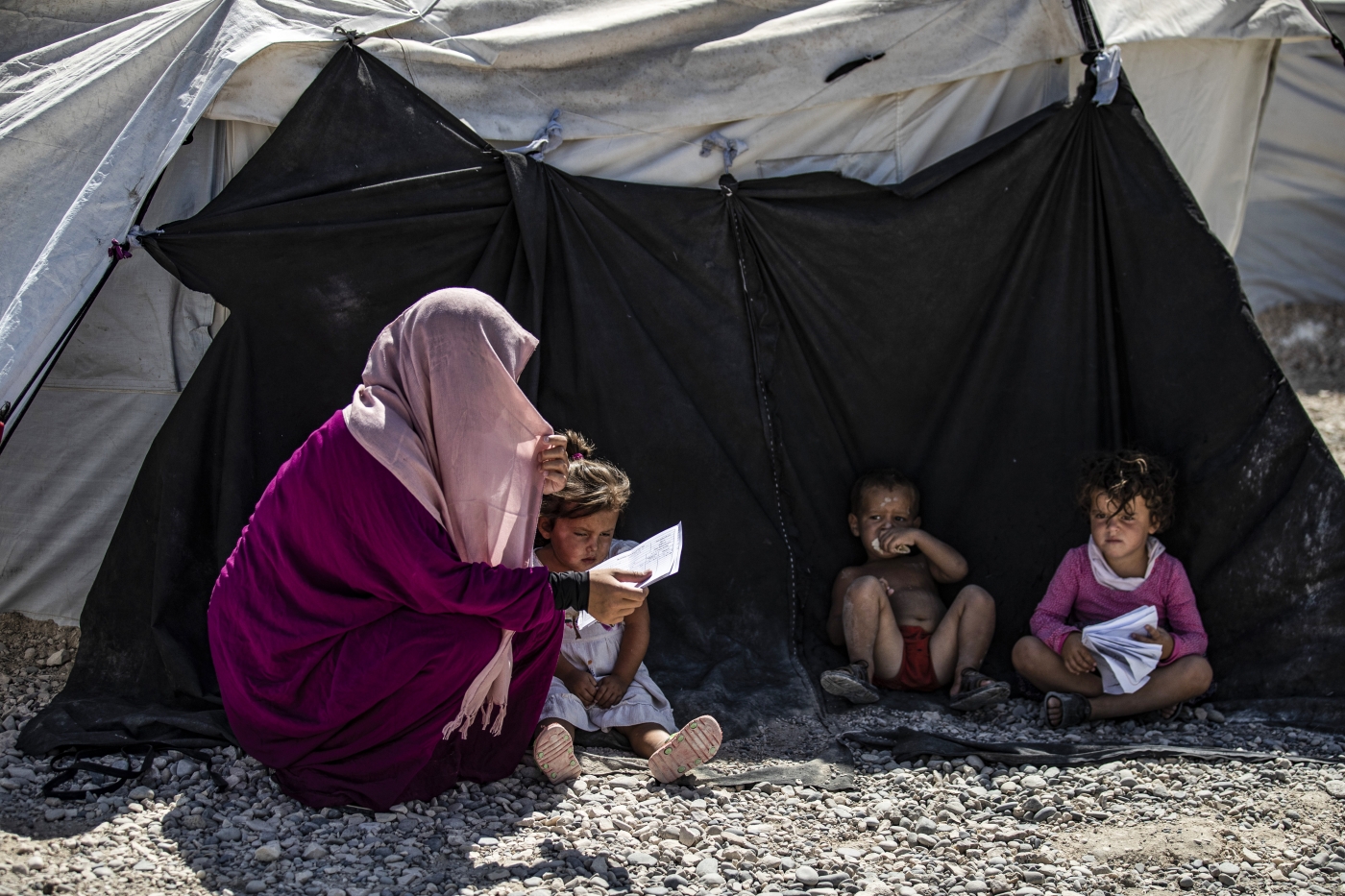 A woman covers her face with a veil as she holds a manifest of names while sitting by children outside a tent at al-Roj camp, 30 September 2020 (AFP)
By
Chloé Benoist

French authorities arrested at least six French citizens on Tuesday for sending funds to relatives in Syrian refugee camps, a move denounced by a collective of families of those waiting to be repatriated from Syria, only to release them two days later without charges.

French media reported that some 55 raids were carried out by the French national anti-terrorism prosecution (PNAT) earlier this week as part of a crackdown on “cyberfunding of terrorism”, leading to 29 arrests across France.

However, at least six of those detained were reportedly seeking to send money to relatives currently living in dismal conditions in camps such as al-Hol and al-Roj, located in the countryside near al-Malikiyah in Syria's northeastern Hasakah province.

Thousands of foreigners travelled to Syria and Iraq during the height of the Islamic State’s (IS) so-called caliphate spanning across parts of both countries. While IS has since lost control of these territories, the fate of foreigners detained in camps, the majority of whom are women and children, has remained a lingering question for many countries - including France - reluctant to repatriate citizens who may have had ties to the militant group.

As a result, many French families have been fighting for years to make sure their loved ones, an estimated 90 percent of whom are under 12 years old, survive until they are brought back to France.

While families have long sent money to the refugee camps via money transfer agencies such as Western Union and Moneygram, in recent months many have reported being barred from using such services - leading them to turn to cybercurrencies such as Bitcoin.

According to a leading member of Collectif des Familles Unies (Collective of United Families), who spoke on condition of anonymity, French authorities have been aware for at least two and a half years that families were sending money to Syria, reaching their relatives via Kurdish forces guarding the camps in which the wives and children of IS members are held.

"There is a tacit agreement for these money transfers to take place," the source told Middle East Eye. "Now there is a problem due to the method used (to transfer these funds)."

The member of the collective said around 10 of those detained this week were either members or were known to the organisation - but later added that they had been released on Thursday evening without charges held against them.

Marie Dose, a lawyer for Collectif des Familles Unies, denounced French authorities on Wednesday for cracking down on families desperate to help their loved ones.

"What are they being blamed of? Sending money to their nephews, nieces and grandchildren detained for months, even years, in unsanitary camps in Syria, where the utmost misery reigns," Dose said in a statement.

The collective highlighted how crucial financial support was to keep their relatives alive.

"In al-Roj, like in al-Hol, everything has a cost," the member told MEE. "There are humanitarian rations of rice, olive oil and lentils... But diapers cost money, milk costs money, water costs money… if you want to live, you need money."

UN Special Rapporteur on Extra-Judicial Executions Agnes Callamard also reacted to the news of the arrests, calling the approach of French authorities contradictory to their international engagements.

"Dear French government: you are the first to defend humanitarian exception during debates in the Security Council on the financing of terrorism. Why ignore it in this context?" she wrote on Twitter.

The collective member said the fact that only some families were targeted by France's anti-terrorism prosecutors raised questions. 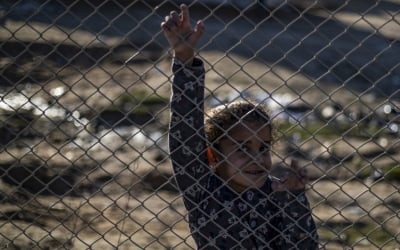 "Those who were arrested have done no more and no less than other families" in the same situation, they noted. "We don't understand why these families have been arrested when what is being held against them is the same thing as tens of others who were not detained… there's something a bit strange."

The crackdown on families is viewed as all the more troubling for families given France's reluctance to repatriate citizens from Syria or provide them with significant aid on the ground.

"The (French) state is doing strictly nothing,” the collective member said. “Basic rations come from Unicef, the rest comes from families."

Whatever aid France is providing to refugees in that region is blanket assistance, the member said, without any additional help for its citizens.

Repatriations, meanwhile, have been slow and limited, they added, saying only 28 French citizens had been brought back.

"What is blocking the issue is that France does not want to repatriate mothers," the source said. "It is unfortunately a political question, not one of human rights or even of practicality."

While Collectif des Familles Unies is hopeful that a growing number of French MPs supporting the repatriation of mothers and children from Syria, fears remain over whether their relatives will survive the difficult living conditions in the camps, particularly with winter on the way and the coronavirus pandemic still spreading.

"All that we're asking for is that they don't spend a third winter in these conditions," the activist said. 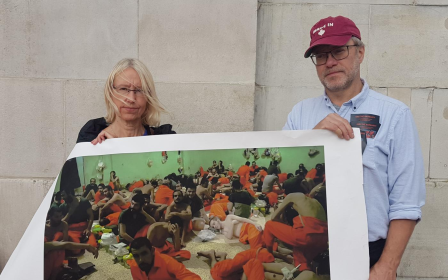