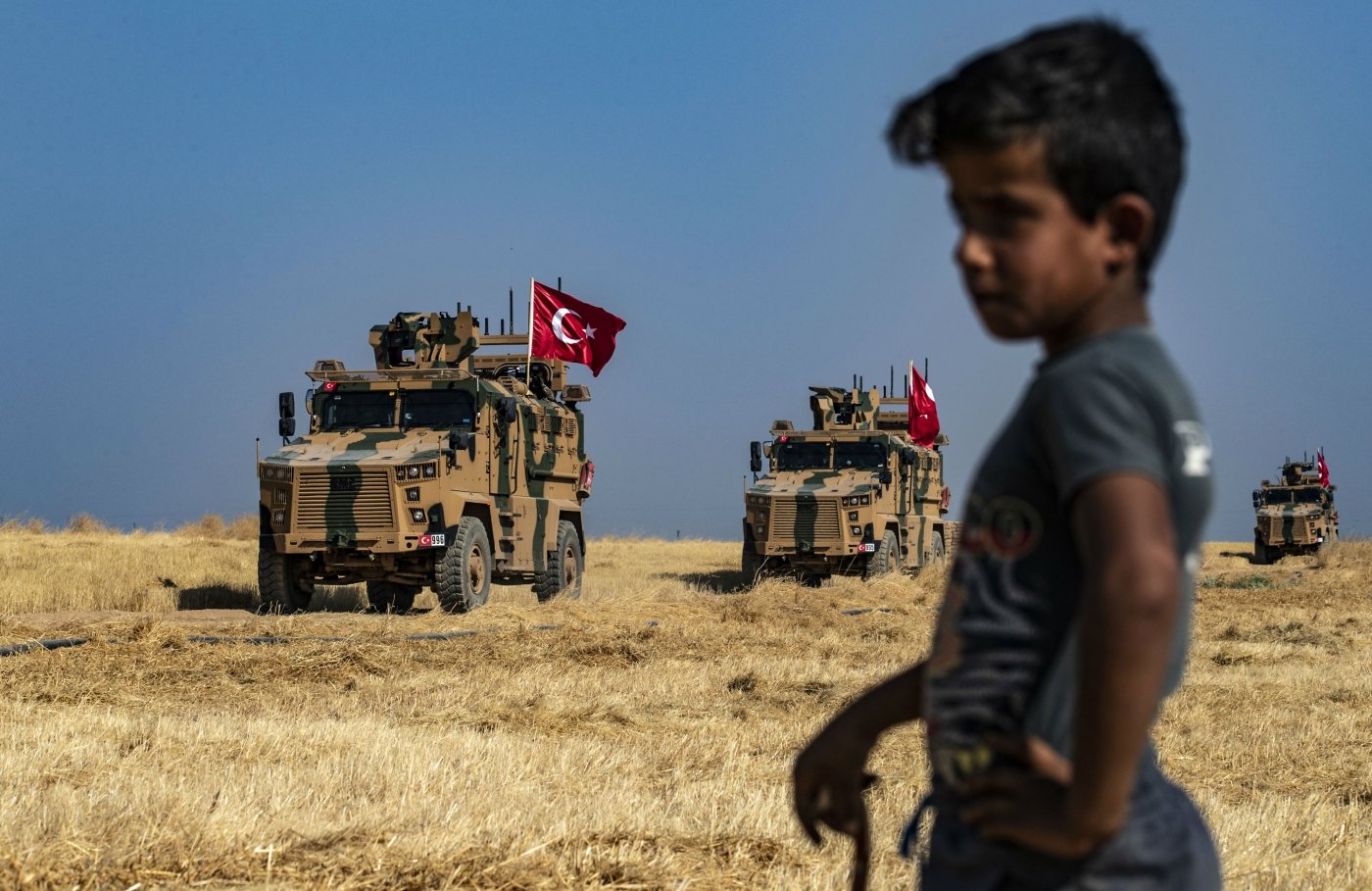 A Syrian boy watches as Turkish military vehicles, part of a US military convoy, take part in joint patrol in Syrian village of al-Hashisha on the outskirts of Tal Abyad along the border with Turkey (AFP)
By
Ragip Soylu
, Harun al-Aswad
in
Ankara

Turkey-backed Syrian rebel groups have merged under one command, two senior Syrian opposition officials announced in a news conference on Friday, raising expectations that they will aid Ankara in a looming offensive.

Abdurrahman Mustafa, the head of the opposition Interim Government, and Salim Idris, its defence minister, said in a joint statement that over 40 groups represented by the National Army and National Liberation Front had merged and will be led by their administration.

However, the news conference seemed hastily organised, since Raed Yasser Mahmoud, a spokesman for the National Army, told Middle East Eye that he wasn't aware of the meeting.

Likewise, a National Front for Liberation commander, speaking on condition of anonymity as he was not authorised to speak to the media, said no one in the rebel group knew anything about the merger.

'The leadership didn’t inform anyone. The press conference was only covered by Turkish media'

"The leadership didn't inform anyone. The press conference was only covered by Turkish media," he said.

"Even us, we don't know anything. We are waiting for the leaders to come out of the press conference to tell us what's happening."

The move comes amid increasing concerns among US officials that Turkey will soon conduct a military operation against Kurdish forces in northern Syria.

The two countries have been working together to satisfy Turkish security concerns.

The Kurdish People's Protection Units (YPG), which Ankara considers an arm of the outlawed Kurdistan Workers' Party (PKK), controls large areas of northeastern Syria and has been the US' principal partner in the fight against the Islamic State (IS) group.

Turkish President Recep Tayyip Erdogan warned this week that a military operation in Syria could happen "in any night" because the US had been slow to implement a "safe zone" deal that would create a buffer between the Kurds and Turkey's border.

Turkey's military has been redeploying elite units and armoured vehicles to border towns as dozens of medics have been placed near the border over the past month to support any possible offensive.

At the news conference, Mustafa and Idris declared their support for a possible Turkish offensive. "Our people in the east of the Euphrates faced massacres. Their villages and towns were destroyed. They were forced to immigrate. We are supposed to relieve their pain and fully back Turkey's counterterror efforts," they said in a joint statement.

Experts view the merger as an important development, and it is the first time that 41 Free Syrian Army rebel groups have come together as one body.

"It is important because it hasn't happened over the past eight years. It is also important that the National Coalition of Syrian Revolution and Opposition Forces, the political opposition body, will for the first time have a say over the armed groups," Omer Ozkizilcik, a Syria expert at the Ankara-based conservative think tank SETA, told MEE.

Ozkizilcik said Sanliurfa, the location chosen by the opposition, was particularly interesting since it was located on the other side of the border from the Syrian town of Tal Abyad, which many in Ankara see as the first point of entry to Syria.

"On the other hand, opposition forces have strengthened themselves against radical elements such as HTS in Idlib," he said.

"The main challenge here is to implement this unification decision. It will be hard and it will require some time to realise it." Syria War
Is Syria's military back in the driving seat?
Kamal Alam