Rebels leaders say they will not talk with government unless Assad steps down, hitting hopes of negotiations starting in January International attempts to end the war in Syria were facing a number of obstacles on Friday, with rebels refusing talks and no agreement on which groups should be placed on an official "terrorist" list, hours before the UN Security Council was due to discuss a resolution setting out a timetable for peace.

The International Syria Support Group (ISSG) – made up of 17 countries including Russia, Saudi Arabia and the US plus international organisations – was due on Friday to present to the UN Security Council an agreed plan that would lead to ceasefires and ultimately a new government in Syria.

But diplomats in New York said that members of the ISSG had yet to agree on the wording and terms of any such resolution, due to be debated in the UNSC at 8pm GMT.

Meanwhile, the head of a committee of rebel groups formed at a Riyadh conference reiterated on Friday that no talks would take place before Assad stepped down.

Riad Hijab, a former Syrian prime minister who defected in 2012, said: "Assad and his government must not be in power, the transitional period has to be without him and he must be tried for his crimes."

The situation was further complicated by Jordan's submission of a recommended list of rebel groups in Syria that should be classed as terrorist, which included groups which sit on the committee of opposition groups agreed in Riyadh earlier this month.

The obstacles threaten to derail a diplomatic push, agreed in Vienna in November, to have direct rebel-government negotiations under way by 1 January, followed by ceasefires, and a "transitional" authority that would oversee moves towards a new government within two years.

Najib Ghadbian, UN envoy for the Syrian National Coalition, the US-recognised Syrian political opposition, said on Friday that it needed "a month or so" to prepare for political talks that would begin in tandem with a ceasefire. "I don't think those timetables are realistic," Ghadbian told reporters.

Before the Friday meetings in New York, Russia had agreed to a US-initiated draft resolution on Syria, despite the two countries’ conflicting stance on Syria.

After President Vladimir Putin reiterated that the fate of Assad should be decided by the Syrians themselves, he called on the Damascus government to accept what will be decided in the United Nations “even though it probably will not appeal to them”.

Putin said both sides must make concessions and called for a “transparent” mechanism to help Syrians to organise a democratic vote to elect a president.

But Russian Ambassador Vitaly Churkin on Thursday hinted at significant disagreements on the draft resolution from the Security Council’s five veto powers - the United States, Britain, France, Russia and China – divided despite weeks of high-level meetings and discussions aimed at finding a compromise.

"I'm not sure it [UN resolution] is going to happen because there are some unfortunately deliberate, or not deliberate, attempts to undercut the Vienna documents and we don't want to see that," he told reporters.

Another sticking point in talks appears to be the production of a "terrorist" list, compiled by Jordan and sent to Russia for inspection on Friday. The list – which Jordan was asked to coordinate during the Vienna talks - names 160 groups in Syria suspected of involvement in organised terrorist activities that should be banned from the peace negotiations.

It is based on information provided by other countries, including Russia, the US and Saudi Arabia, but includes several larger opposition groups that many in the Gulf and also the West feel must be part of the process.

Conversely, foreign militias fighting alongside Syrian government forces such as the Lebanese Shia Hezbollah group and Iranian troops were not included.

It is expected that after the various parties agree on the list it will be forwarded to the UN Security Council to be officially included on the UN terrorist list.

“This is the beginning of negotiations on this list. I don’t expect Jaish al-Islam and Ahrar al-Sham to be included in the final version of the list of terrorist groups in Syria,” she said. "The first draft was produced by Jordan and the second draft will be negotiated by the support group.

“As part of these negotiations, I don’t expect countries like Qatar, Turkey and Saudi Arabia to agree on including groups like Jaish al-Islam and Ahrar al-Sham- and [this is why …] these three countries had their own trilateral meeting prior to the larger one for the ISSG – in order to discuss strategies and which groups should be included.”

A spokesman for the Nour al-Din al-Zenki movement, a rebel group formed in August 2014 from a coalition of 72 rebel factions, told the London based newspaper al-Quds al-Arabi that negating the role of certain rebel groups leaves civilians with no choice but to join more radical militias.

Abdul-Salam Ahmed Abdul Razak said: “Those who classified Zanki as a terrorist movement have fallen for the prescribed Russian war on all factions of the revolution and the Syrian people.

"There are regional countries who are trying to abort the revolution, in cooperation with Russia and Iran, and are using terrorism as a pretext for the largest terrorist regime and sectarian militias to conduct their policies.

“We fought terrorism in all its forms, which tried to bury the revolution,” he added. “Our goal is to achieve the aspirations of our people in freedom and dignity and to get rid of the criminal regime and all those who exercised its terrorism.”

Fierce divisions are also emerging within the opposition with Islam Alloush, the leader of the Jaish al-Islam group, saying on Friday that it was considering withdrawing from a committee formed at a Riyadh conference earlier this months.

Another group, Ahrar al-Sham, pulled out of Riyadh meeting on 11 December, citing that they had a "religious and national obligation" to refuse to work with "regime sympathisers” present on the table.

Opposition groups agreed that there would be no transitional government unless Syrian President Bashar al-Assad is removed from power and that he would play no part in the transitional phase.

Assad's ally Russia, however, has continued to insist that Assad must be part of the solution, with America also softening its stance toward the Assad, saying that he would have to go but not immediately.

US Secretary of State John Kerry travelled to Moscow this week to assure Russian officials that Washington was not seeking "regime change" in Syria. 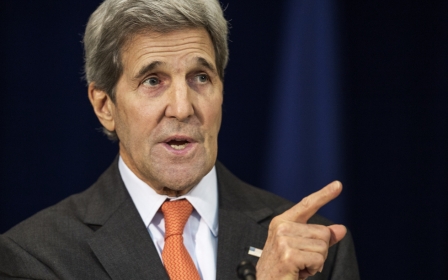 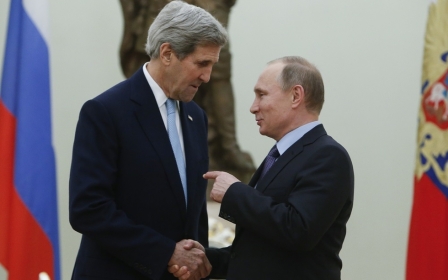