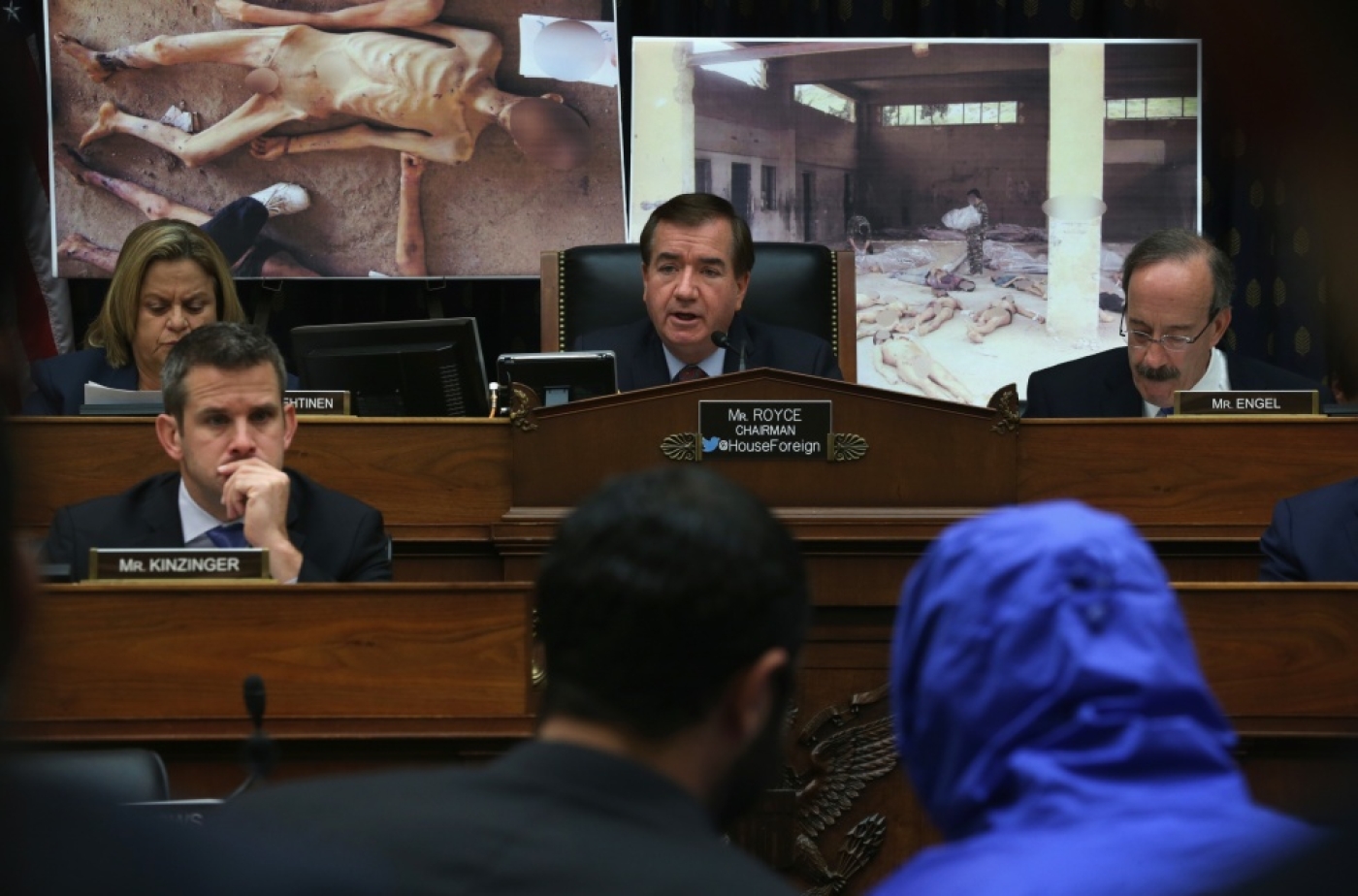 Syrian Army defector 'Caesar' (in a blue hooded jacket) at a briefing before US House Foreign Affairs Committee on July 31, 2014 (AFP)
By
MEE and agencies

Graphic images of the brutal conflict in Syria were displayed before US lawmakers Thursday as an army defector gave an eyewitness account of the horrors he was forced to photograph.

"I am not a politician and I don't like politics... and neither am I a lawyer," said the former Syrian military police photographer who escaped from Syria last year, bringing with him some 55,000 photographs taken as part of his job to catalogue the dead.

"I had the job of taking pictures of all the deaths... before and after the revolution," explained the man known only as Caesar, who appeared in heavy disguise before the House foreign affairs committee to brief them on the war.

He was required to download the photos and store them on state computers to document the battle against the rebel opposition by the government of Syrian President Bashar al-Assad, now in its fourth year.

"I have seen horrendous pictures of bodies of people who had tremendous amount of torture," Caesar told about 100 people who listened in heavy silence. Around them on easels were six enlarged photos showing naked, skeletal bodies lying on the ground.

Most had been stretched out in meticulous rows, some bearing white labels attached around their wrists, all with their faces blanked out. A few still wore underpants, but most were naked.

Speaking through an interpreter, Caesar told of seeing corpses with "deep wounds and burns and strangulations" -- some of which had had "their eyes carved out" and others that were "emaciated and skinny."

"They were starved to death and their bodies looked like skeletons. These people died of starvation," Caesar said, adding he had never seen anything like it except for images taken during the Nazi regime in World War II.

"Sometimes I would come across pictures of my own neighbours and some of my friends that I recognized," he told the hushed room, with his profile barely visible under a blue hooded jacket, with the hood's drawstring drawn tight and a cap underneath and a pair of sunglasses.

"Death would have been my fate if the regime had found out I was leaking out secret information."

More than 170,000 people have been killed since the uprising began in March 2011, and millions have fled either within the country or to refugee camps abroad.

Caesar maintained some 150,000 people were still in Syrian jails, facing the same fate as the lifeless bodies in his photos.

At his side was former special prosecutor David Crane, who tried Liberian president Charles Taylor and is now working on setting up a tribunal to bring those responsible for war crimes in Syria to justice.

"We rarely find smoking gun evidence, but that's what we found," Crane told the lawmakers, adding he and his team were "stunned by the magnitude of this."

At least 63 people, including eleven children and six women, were killed in air and ground operations across Syria on Wednesday by pro-Assad forces, said the London-based Syrian Network for Human Rights watchdog.

According to the watchdog, at least 116 people were killed by government forces in fighting across Syria during the three-day festivities of the Muslim holiday of Eid al-Fitr.

"The regime is asphyxiating half a million Syrians in Aleppo by obstructing deliveries of food, water, and medicine," US Secretary of State John Kerry said in a statement.

"Syrians all over the country are being butchered at the hands of a ruthless tyrant," Kerry said, strongly condemning "the brutally indefensible and illegitimate Assad regime."

The regime was "dropping dozens of barrel bombs a day on the city and surrounding suburbs," he said.

The new aid brings the US total released for Syria since the start of the war three years ago to $2.4 billion, and Kerry insisted that it was "having an impact on the ground -- right now."

Some $1.2 billion has gone towards helping more than 4.7 million people inside Syria, and $1.2 billion is going towards aid efforts for some three million refugees who are being sheltered in neighbouring countries.

US aid was helping to feed some four million Syrians inside the country, and another 1.9 million had been treated in more than 300 US-supported hospitals and health clinics across Syria, Kerry said.

He insisted that Washington remained committed "to finding a political solution to this crisis" even though efforts to bring the government and the opposition to the negotiating table collapsed earlier this year without any progress. 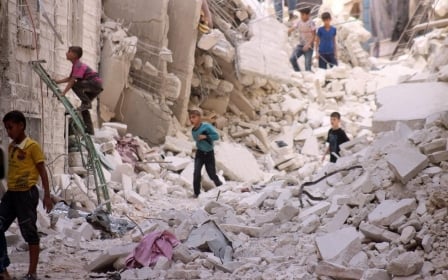 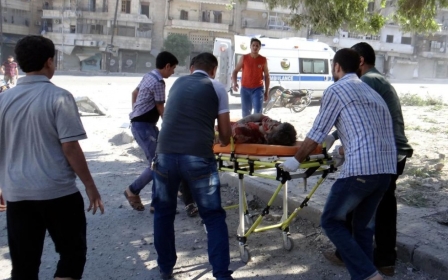