Syrian Kurd leader says IS victory would be 'disaster for everyone' QAMISHLI, Syria - If President Bashar al-Assad’s government were toppled by Islamic State (IS) fighters and the others who have moved close to Damascus, it would be a “disaster for everyone,” Saleh Muslim, the leader of the Syrian Kurds, told Middle East Eye.

His movement’s armed forces, known as the People's Protection Units (YPG), are by far the most successful "boots on the ground" against IS as well as Assad in Syria, and the Obama administration makes no secret of the fact that it has been bombing IS targets in Syria in coordination with Kurdish factions on the ground.

In a wide-ranging interview, Muslim became the first ally for the US-led coalition in Syria to say that defeating IS takes priority over removing Assad. Although some have hinted at this obliquely, neither President Barack Obama, nor any other western politicians have expressed the view publicly.

Muslim made it clear to MEE that he still supports the struggle for democratic reform and political pluralism which broke out against the Assad government in 2011, but said that this had been subverted and superceded by the intervention of armed foreign-backed fighters like IS and al-Nusra Front.

He was asked whether he thought Assad’s government was collapsing due to IS increasingly moving into the Damascus suburbs. Using the word “salafis” to refer to IS and other armed hardline religious groups, he replied: “If it collapses because of the salafis, it would be a disaster for everyone. If it collapses by agreement with other forces, it would be alright. The salafis are around Damascus on several sides. This is dangerous.”

“The defeat of Daesh [a pejorative Arabic acronym for IS] is our main goal. We wouldn’t feel safe in our home as long as there is one Daesh person left alive in the world. It’s not only Daesh. There are similar groups. Jabhat al-Nusra [al-Nusra Front, the Syrian affiliate of al-Qaeda] has the same mentality as Daesh. They are enemies of all humanity,” he declared.

The Syrian army withdrew from the largely Kurdish region of northeastern Syria in July 2012 after Assad decided his forces were overstretched and needed to be redeployed to defend the country’s heartland. Since then, IS and other anti-Assad groups have often tried to smear the Democratic Union Party (PYD), of which Saleh Muslim is co-president, and its armed forces the YPG, as being allies of the Syrian government. But Muslim and his colleagues have built an autonomous statelet along the border with Turkey and a well-disciplined and highly motivated army that the US treats as a vital ally on the ground.

This year, with the help of US airstrikes, the YPG drove IS out of Kobane and Tal Abyad, two strategic towns on the border with Turkey. The YPG now has its sights on capturing Jarabulus, the last IS-controlled crossing into Turkey. If IS were to lose the town, it would block the gateway through which thousands of foreign volunteers from Europe, North Africa and Asia have passed to join the group.

Some analysts have suggested that the US should start co-ordinating its airstrikes with Assad’s forces as they battle IS, although the US has dismissed this.

Muslim attempted to square the circle by saying this could help as long as it was more about defeating IS than reinforcing Assad. Asked if US coordination with the Syrian army would be useful, he replied: “In some areas it could be. Why not? There should be co-ordination between all sides, but not for supporting the regime.”

But it would be “impossible" for the Americans to work with the Russians and the Syrian government, he continued. “That would mean the US would cut off relations with all its allies in the area,” he said.

In spite of assisting Muslim’s forces on the battlefield, the US keeps the movement politically at arm’s length. It is reluctant to antagonise Turkey, which fears the Syrian Kurds will join with the Turkish and Iraqi Kurds to create a new state in the region. The YPG are also strongly linked to the Kurdish Workers’ Party (PKK) in Turkey whose base camps Ankara has been regularly bombing since July after the PKK assassinated two Turkish policemen. According to Turkish President Recep Tayyip Erdogan, since the conflict began, more than 500 PKK fighters have been killed. More than 150 Turkish security officials have also been killed in PKK attacks.

Muslim said he had frequent contact with US diplomats and has one representative based in Washington, but he wanted others to get visas to brief members of Congress periodically. “The Americans haven’t delivered any weapons or ammunition. So far our people haven’t received anything from the US on the ground,” Muslim said.

He also said that he had been in Erbil, the capital of Iraqi Kurdistan, last week to meet with its president Massoud Barzani. Brett McGurk, the deputy US special envoy for the anti-IS coalition, had organised the meeting and taken part.

Muslim received MEE in a modest house in the guarded compound where the PYD has set up a training academy for its political cadres in Remelan, a town in Syria’s far northeast close to the point where the borders of Iraq, Syria and Turkey meet. Barefoot in the carpeted livingroom, Muslim has a soft-spoken and humble manner which gives no hint of the inner strength it must have taken to build a formidable political and military movement in a handful of years. He admitted he was surprised by the movement’s phenomenal growth into the leading force in northern Syria.

Born in a village near Kobane in 1951, he graduated from Istanbul Technical University in 1977. He learned English during a 10-month stay in north London in 1978, followed by 12 years working alongside American and British oil companies as an engineer in Saudi Arabia.

As well as his pragmatic links with the United States, Muslim is a regular visitor to Moscow. He was in the Russian capital last month seeing Mikhail Bogdanov, the special envoy for Syria.

Muslim was relaxed over the implications of Western reports of a Russian military build-up along Syria’s Mediterranean coast. “We are very doubtful that they have forces on the ground. The Russians assured me they wouldn’t be involved in fighting,” he said.

“We don’t agree to have any foreign forces in Syria," he added.

That also applies to Turkish forces. Many Syrian Kurds are worried that Turkey might start bombing the YPG, as it has often done against the Turkish PKK’s rear bases in northern Iraq. In the past, it has made ground incursions with troops inside Iraq.

Muslim said that two years ago he had been worried by possible Turkish military intervention in Syria. Now he was convinced it could not happen. “Turkey is not so free to do that. It would create a big problem for Turkey,” he said, implying that Washington and Turkey’s other allies would not tolerate it.

But he admitted to being concerned about the recent agreement between the US and Turkey under which US planes are permitted to use Incerlik Air Base in southern Turkey to bomb IS targets in Syria and Iraq. No details of the agreement, and any American quid pro quo, have been published. Turkey has talked of creating a no-fly zone inside Syria between the border districts of Jarabulus and Azaz. The Kurds see this as a possible pretext for bombing the YPG and weakening their hold. The Turkish press has also been full of speculation about it.

“Nothing has changed yet but we are worried about what hasn’t been said. The Americans have assured us that what’s in the media is not true,” Muslim said. “The Americans are not supporting the no-fly zone, this safe area. They’re talking about an IS-free area.”

The YPG has long had hopes of itself moving into the Jarabulus-to-Azaz area. This would not only end IS control of its last border crossing to Turkey, thereby stemming the flow of foreign volunteers and having a massive effect on IS recruitment. It would also link the Kurdish-administered region’s two cantons east of the river Euphrates with the largely Kurdish western canton of Afrin. The Kurds call the whole area Rojava.

Muslim made it clear he wanted to take advantage of Washington’s desire to have an “IS-free zone” on the Turkish border. “The perfect way to do it is ground troops [from the YPG] and air support,” he said.

Muslim used his interview, at several points, to say that the YPG was working with fighters from non-Kurdish communities (although he did not specify how many) and that the YPG, as well as being secular, wanted to defend all ethnic communities, regardless of language and religion. He painted a picture of IS atrocities in the whole Jarabulus-to-Azaz zone, not just along the border but down to the town of Manbij some 40 kilometres to the south. They were affecting Arab and Turkmen communities as well as Kurds. The YPG did not have its forces in the area yet.

He said he had just heard from Manbij (a town some 100km northeast from Aleppo) where 30 percent of the population is Kurdish and spread out across some 150 Kurdish villages. “Yesterday, Daesh took 300 houses and slaughtered seven people. I don’t know how many were Kurds. There are local forces but they are weak. We’ve heard that Jabhat al-Nusra and Daesh are fighting against the Army of the Revolution [a US-backed group]. The best way is for YPG and local groups to coordinate with the help of airstrikes.” The town of Jarabulus must be taken from IS, he continued.

By the same logic of allying with other ethnicities, Muslim said he saw no reason why the YPG should not move beyond Rojava and take the fight to Raqqa, the capital of IS’s self-declared caliphate. Although it was an Arab-majority district, there were 50,000 Kurds living there who needed to be liberated, he said.

In the 1970s, Hafez al-Assad, Bashar’s father, settled thousands of Raqqa Arabs in new villages near the Turkish border to create a so-called Arab belt separating Syrian Kurds from their kin in Turkey. The modern Syrian-Kurdish border was artificially drawn by French colonial officials along the railway line from Mosul to Aleppo.

In the current fighting, many Arab civilians fled in the face of YPG advances, though some have come back home. There have been reports of "ethnic cleansing" by the Kurds, although civilians tend to flee in the face of fighting. Rumours that they will be killed by the invaders add to the panic.

Muslim conceded that the YPG had some difficulty in areas that are mainly Arab. But he cited the example of Tal Abyad, a town where half the population is Arab, which the YPG took from IS in June. He said that the victorious Kurds were now setting up local councils there with representatives from the Arab, Turkmen and Kurdish communities. “We have to help them organise and defend themselves. Everybody trusts the YPG forces. They haven’t slaughtered. They haven’t killed. They haven’t burnt. They’re not Daesh,” he said.

Amnesty International published a report earlier this month quoting Arab and Turkmen refugees in Turkey, who accused the PYD of using arbitrary detentions and unfair trials against non-violent critics and civilians, although Muslim denies this.

“They don’t show proper evidence. The report wasn’t telling the truth," he told MEE. "I can assure you there are no political detainees at all. If there is a robbery and someone from another party is suspected, it doesn’t mean they’re being persecuted. If you keep someone for a week for investigation, it doesn’t mean detention.”

The Syrian Kurdish leader said there might be “small cases” where mistakes were made, but instead of blaming the authorities outsiders should help to train them. 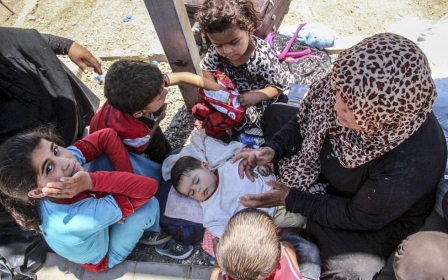 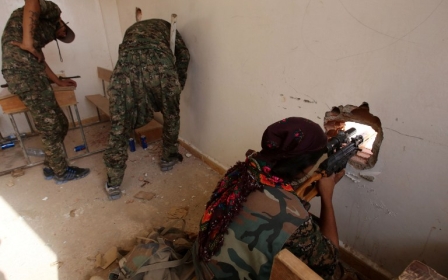