The Syrian government has been accused of carrying out a chlorine attack in Syria, hours after the US had condemned a chemical attack in southern Idlib that killed scores.

Video footage shared on social media showed what appeared to be Syrian government helicopters dropping barrels filled with chlorine on the village of al-Lataminah in northern Hama.

Large plumes of yellow smoke were also shown in the video billowing over the village.

Other images shared by activists showed victims from the attack foaming in the mouth, with naked children being hosed down by rescue workers.

Rebel controlled areas of Hama and Idlib have been subject to weeks of chlorine attacks from Syrian warplanes as armed opposition rebels continued to fight the government.

The US president Donald Trump on Wednesday said his Syrian counterpart, Bashar al-Assad, had crossed a "red line" for an attack on Tuesday in Khan Sheikhun, Idlib, which killed more than 70 people and poisoned hundreds.

Walid Muallem, Syria's foreign minister, said on Thursday that his government would never use chemical weapons "even against terrorists".

"I stress to you once again: The Syrian army has not, did not, and will not use this kind of weapons...even against terrorists," said Muallem.

The Kremlin described the Khan Sheikhun attack as "a monstrous crime", but said American accusations against the Syrian government were not based on "objective information".

Volunteer rescue workers and residents described Khan Sheikhun as deserted on Thursday, and said that hundreds of civilians had fled after the attack. 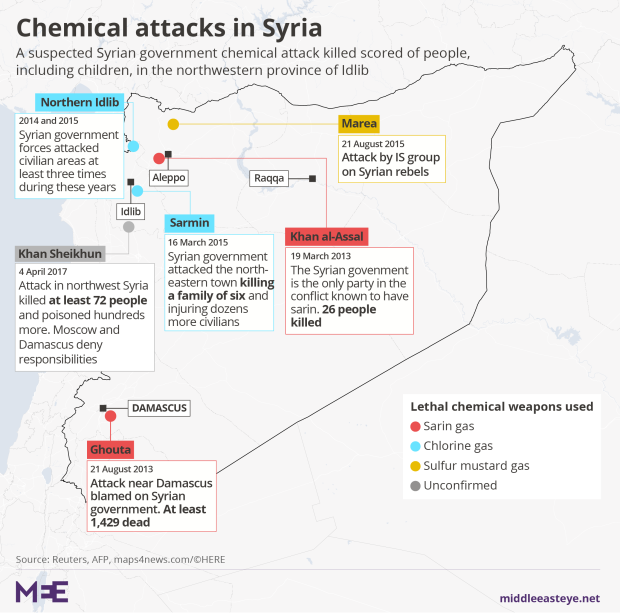 Samer al-Ahmed, an aid worker for the Syrian American Medical Society, told Middle East Eye that the majority of the patients from the chemical weapons attack were evacuated to Turkey for further treatment.

Western intelligence agencies have also obtained soil samples from Khan Sheikhun and biological specimens that will be used to compare with Assad's previous stockpile of chemical weapons, according to the Guardian.

The Idlib health directorate that oversees medical facilities across Idlib province said about 74 people, including 20 children, were killed in the chemical attack.

The death toll continues to rise with rescue teams finding dead civilians killed by the chemical attack under rubble and in their homes in Khan Sheikhun.

German Chancellor Angela Merkel said on Thursday it was a scandal that the UN Security Council did not pass a resolution condemning the attack.

"It was a barbaric attack that must be cleared up. The use of chemical weapons is a war crime," Merkel told a news conference in eastern Germany, adding there were some indications it was carried out by Assad's forces.

"It is a scandal that no UN Security Council resolution materialised and those who opposed it must consider what responsibility they bear," she said. She declined to interpret Trump's comments that the attack went "beyond a red line."