Syria's internally displaced people are targets wherever they go 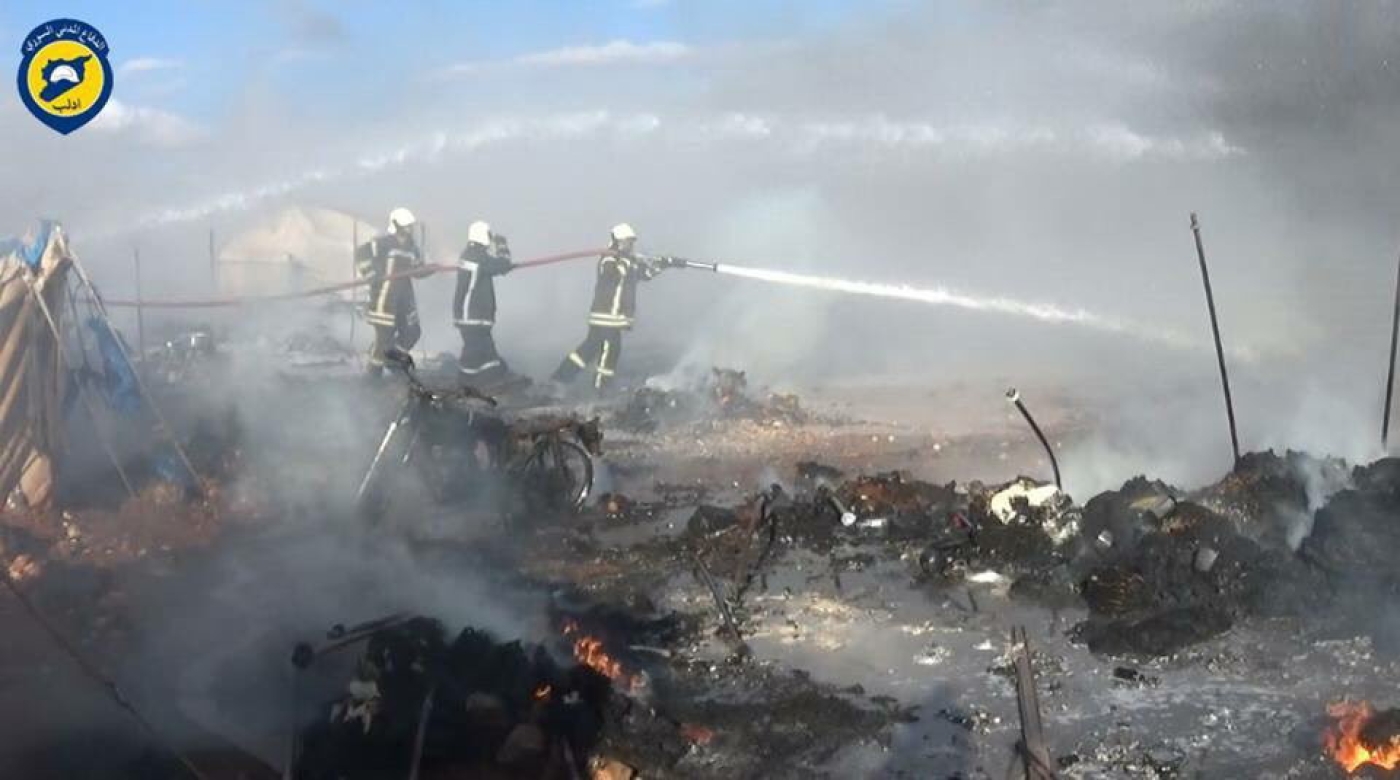 ANTAKYA, Turkey - "I could feel I was wounded, but my four children were all I was thinking about. I looked around and saw only body parts of my two-and-a-half-year old, and the limbs of my 12-year-old girl. Then fire ripped through the tent."

Fatima, 36, in hospital in Antakya, asked that her last name be kept private. She survived the air strikes on the al-Kammouna IDP camp in Syria’s Idlib province a fortnight ago. Two of her four children did not.

Thirty people were killed by missiles launched from the sky, from Russian aircraft, rescue workers said.

Fatima had arrived at the camp for internally placed people (IDPs) three days earlier, having fled her home village. “We were living on dirt,” she told MEE. “But we thought at least it was safer than Anadan, where there were continuous air strikes.”

But al-Kammouna, previously home to 4,500 people, was far from safe. And it is just one example of widespread attacks on IDP settlements. Survivors have either fled the country or joined Syria’s 6.6 million internally displaced people, many of whom have been uprooted for a second or third time.

On Tuesday, pro-government thugs opened fire on IDPs at the Alkarnak camp in Tartous Province. "A number of IDPs were killed or wounded when paramilitary militants, known as shabeeha, opened fire randomly on the camp," the Syrian National Coalition said.

Another woman, Fatima Fareed, 24, and her mother, Widad Sakaan, had been at al-Kammouna just one day before the strikes, after escaping from Aleppo.

When the warplanes approached, they were taking bread to a neighbour. They were badly burned in the attack. “May God take revenge on the Assad regime,” said Fareed, also in Antakya hospital. “I hope his heart will burn, like he burned me and my family. May all my people be rid of him soon.”

The UNHCR, the UN's refugee agency, said IDPs and their host communities are “all but exhausted” and the agency lacks the necessary funds and access to provide them all with needed emergency supplies.

Turkey’s border is shut to all except the severely wounded or those who can smuggle themselves across. Still, Fareed and her mother are planning a new life here, like thousands of others who were displaced multiple times before leaving Syria.

Abu Saleh, 32, was living in an IDP camp in rural Lattakia with his two children, but escaped over the Turkish border when the settlement was hit by Russian shelling. He had already moved five times within Syria.

“I was displaced to the camp right next to the border, but even there they targeted us, so I fled to Turkey,” he told MEE. “At least here I can make sure my family is on safe ground, while I try to find a job. I’ve been looking for two months”.

Five families were moved to a camp five kilometres from al-Kammouna, MEE learned.

Bushra, 25, who asked to go by her first name, was among them, and lost her husband and her two children - Maryam and Ahmed - in an attack.

“I looked behind me and saw many corpses,” she said, describing the aftermath. “I looked among them, found the bodies of my husband and two kids.  And then I can't remember what happened. I woke up later.”

Bushra, originally from rural Hama, is now among those recovering in Turkey, but her hopelessness is palpable.

“Let them [the international community] do something – actually anything, except standing still, watching our situation.”

With some displaced communities impossible to reach because of closed checkpoints, violence and bureaucracy, and because humanitarian needs are at a “record high,” assisting IDPs is an increasing challenge, according to the UNHCR.

“The coping mechanisms of internally displaced people and host communities are all but exhausted,” an agency statement said. “More than half of Syria’s hospitals have been destroyed or badly damaged. … More than 1.6 million people are in need of shelter.”

The UNHCR has distributed “core relief items,” including sanitary towels, nappies, blankets and mattresses to nearly 865,000 people so far this year, mostly in rural Damascus and Aleppo.

But there is a lack of funding. The refugee agency's “limited budget” is sufficient for less than a third of overall needs.

IDP settlements both informal and formal have become increasingly caught up in the fighting, raising fears that Syrians fleeing within their own borders have become targets for attacks.

Civilians in the besieged area of Deir Assafir in Eastern Ghouta, in the Damascus suburbs, were displaced this week when pro-government forces retook it from Jaish al-Islam and Faylaq al-Rahman, rival rebel factions.

Some 1,000 of the 6,000-strong population of Deir Assafir were IDPs, having already fled from Eastern Ghouta, according to Siege Watch, which monitors blockaded regions of Syria.

A source inside Eastern Ghouta told MEE that all the residents of the southern districts had been displaced from a total of 12 towns. And the ongoing conflict means that the IDPs in Deir Assafir are being forced to move again.

There were "violent bombardments of residents' houses - planes, missiles and rockets," according to a source who could not be identified for security reasons. "There were civilian casualties. Families refused to surrender to the regime and decided to move elsewhere. They fled as quickly as possible in the middle of the night, without bringing any belongings. They fled to other towns and villages in Eastern Ghouta, and now many of them are homeless."

The district was previously bombarded by government forces. In March, they blasted a school and a hospital, leaving more than 30 people dead. The US State Department said it was “appalled” by the attack.

Although fewer Syrians were internally displaced last year than in 2014, their living conditions have deteriorated.

More than 340,000 people fled to northern Syria between September 2015 and March 2016, according to the latest UNHCR figures.

Abu Saleh said he thought the reason for strikes on refugee camps was obvious: “What the regime and the Russians are trying to do is to keep men busy and worried about their families so they can't resist or fight them."

Members of the White Helmets civil defence force have reported air strikes on camps at Aabden and West Khan Shaykhun in Idlib province. They said the missiles were fired by Russian planes, killing 21 people at Aabden.

Professor Dawn Chatty, from the Refugee Studies Centre at Oxford University, said IDPs in Idleb province were vulnerable because rebels hold the territory and the government perceives that they have a "free hand" to attack.

"These attacks by the government are aimed at undermining the opposition first and  foremost. It would prefer that Syrians IDPs or otherwise lived in  government-controlled zones."