Ten of thousands of Israelis protest against Netanyahu 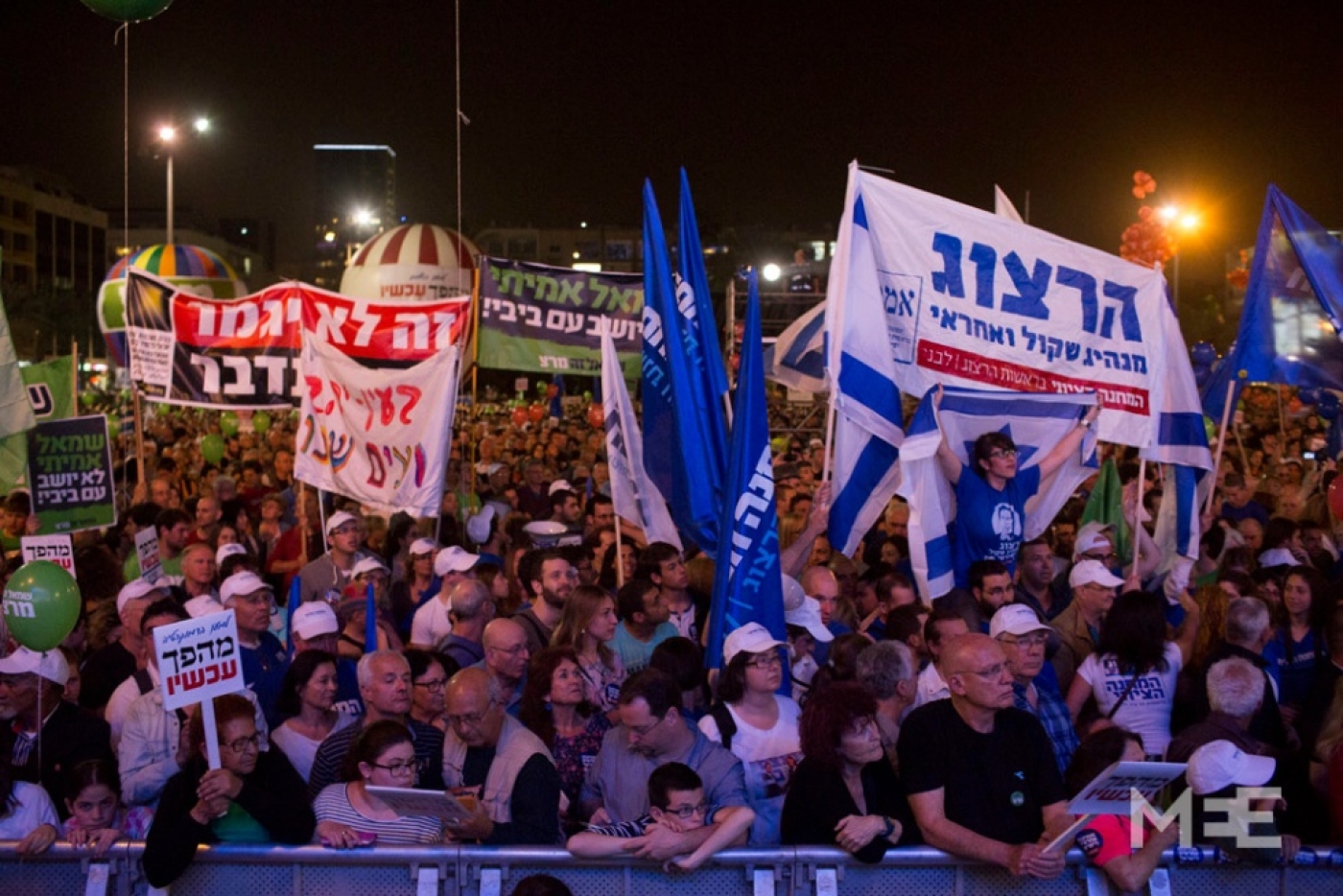 The protest, organised by the V15 movement, a grassroots movement that stands for Victory 2015, was the largest demonstration so far during this year’s elections – and the first time since Netanyahu came to power in 2009 that Israeli voters in such large numbers have demanded a new government.

Their main message, shared in the city’s Rabin Square, was that Netanyahu has led Israel into a catastrophe both diplomatically and domestically.

Knesset members did not speak at the event, which was not associated with any political party. Only social justice activists, a woman who lost her husband in the last war in Gaza, and former members of the Israeli security forces were invited to speak.

In a rare public speech, former Mossad chief Meir Dagan, who once worked closely with the prime minister, spoke out against the continuation of Netanyahu’s six-year leadership at Israel’s helm and who, he said, has left the country “stuck more than ever”.

Michal Kastan Kidar, a widow who lost her husband when he was serving in the Israeli army during the war in Gaza this summer, lamented the fact that no one spoke of peace processes any more and said political parties were not “speaking about the blood that was spilled here this summer”.

"Maybe because it is too scary or too hard,” Kidar said. “But I lost this summer my love of my life in a war, and I came here today to ask you that when you go to vote, vote for the one that will try to prevent the next war, the one that will do whatever possible to prevent more people from dying.”

After the speeches, only the core activists of the parties stayed to clean the posters and flyers that were left on the ground, getting ready for the last few pre-election days, during which they will criss-cross Israel, hoping to convince more people.

Recent polls published in Israeli media show a tight fight between the Likud and the Zionist camps, both  aiming to attract the votes of those Israelis who are yet undecided.

As Netanyahu focuses on the issue of Iran, the Zionist camp is trying to turn public attention to domestic social matters, including the difficulties faced by many Israelis in buying a home and the lagging education system.

A month ago, the Likud party petitioned an Israeli court for an injunction against Sunday's protest organisers the V15 movement. Likud members said the group was funded by the Zionist Camp and Meretz political parties which broke a law that limits the amount of money each party can use on its campaign. They also claimed V15 was funded by the US-based NGO New Israel Fund.

Weeks later, an Israeli election committee ruled that the V15 movement did not break the law and ordered the Likud party to pay legal expenses.

Michal Kastan Kidar, a widow who lost her husband who was serving in the Israeli army during the war in Gaza this summer

"What Netanyahu has done is to crush our hope; everyone believes that this is unavoidable. But I believe that things here can be different. We want Netanyahu and the extreme right out. We call to stop the hate; this has become a hateful country. We just want to be a normal country. It helps them [the government] that people are hating Arabs, but it goes also inside, as people now also hate lefties."

"I come from a military background. Many of my friends and I spent more than 35 years in the army. Most of the years, we felt that we are fighting for Israel's survival, that we have no other choice. Now we feel that is not the situation. The time has come that we need to negotiate for peace, for political and economical agreements. Most of the Muslim countries, like Egypt, like Saudi Arabia, are threatened by extreme Islam, mainly by Iran and the Islamic State, so they are on our side, and it is a great opportunity to start a negotiation with them. My generation, which spent most of our life fighting for Israel, are feeling that Israel is not going in the right direction, that there is no hope for the young generation."

"I am not against Netanyahu personally. I'm in favour of changing the government. The current government is bad for Israel. The fact that Netanyahu went to speak in the American Congress last week damaged Israel, and the people of Israel, and God knows where it will lead us. And this is why I came here - to strengthen all the citizens who want to replace this government."

"Netanyahu is leading a policy that eventually will find ourselves in a binational state, occupying three million people - who wants that? I'm not a politician. I don't care who people vote for. Each one will vote based on his conscience. But I feel Netanyahu is making Israel less secure instead of making this place a safe place."

"I'm with the Zionist camp party, and we are here to protest with the rest of the people who want a change. in the polls, we [the Zionist camp] are steady on 23 percent, and it is only going up; you can see Likud is around 21 percent. I'm going around Israel with our parliament members, and what we hear from the people is just amazing. People are really suffering. They don't have enough money to finish their payments each month. They don't have food for their children, and all the things the country used to give - healthcare, education - now it's expensive and private, and we feel people want a change, and we hope to bring it."

"The main reason i came here today is to convince the people who are not yet convinced to go and vote and to send Netanyahu away. I'm also against the brainwashing that is taking place, that is told to the citizens of Israel that Netanyahu is not replaceable - which is of course false demagogy."

Aviah, a protester who didn't want to share her last name

"I'm here because I'm fed up with Netanyahu, and his behaviour, and to say that monarchy is dead, we don't need a king, we need a roller. I don't think Netanyahu ever delivered what he promised. You can promise anything, but to make it come true is not so easy, and I think there must be a change."

"I came here because i think that the biggest danger for us is that Netanyahu will continue to be the prime minster. He has failed in each and every field, in the economy and the security, and education as well. The situation in Israel has never been so bad. I am very worried about the direction Israel is going. I hope in the coming election we will manage to replace Netanyahu and we will advance forward to a better place."