'If this doesn’t end, I will not be surprised if this leads to something very much bigger than sparks of clashes,' Aqsa mosque director tells MEE. 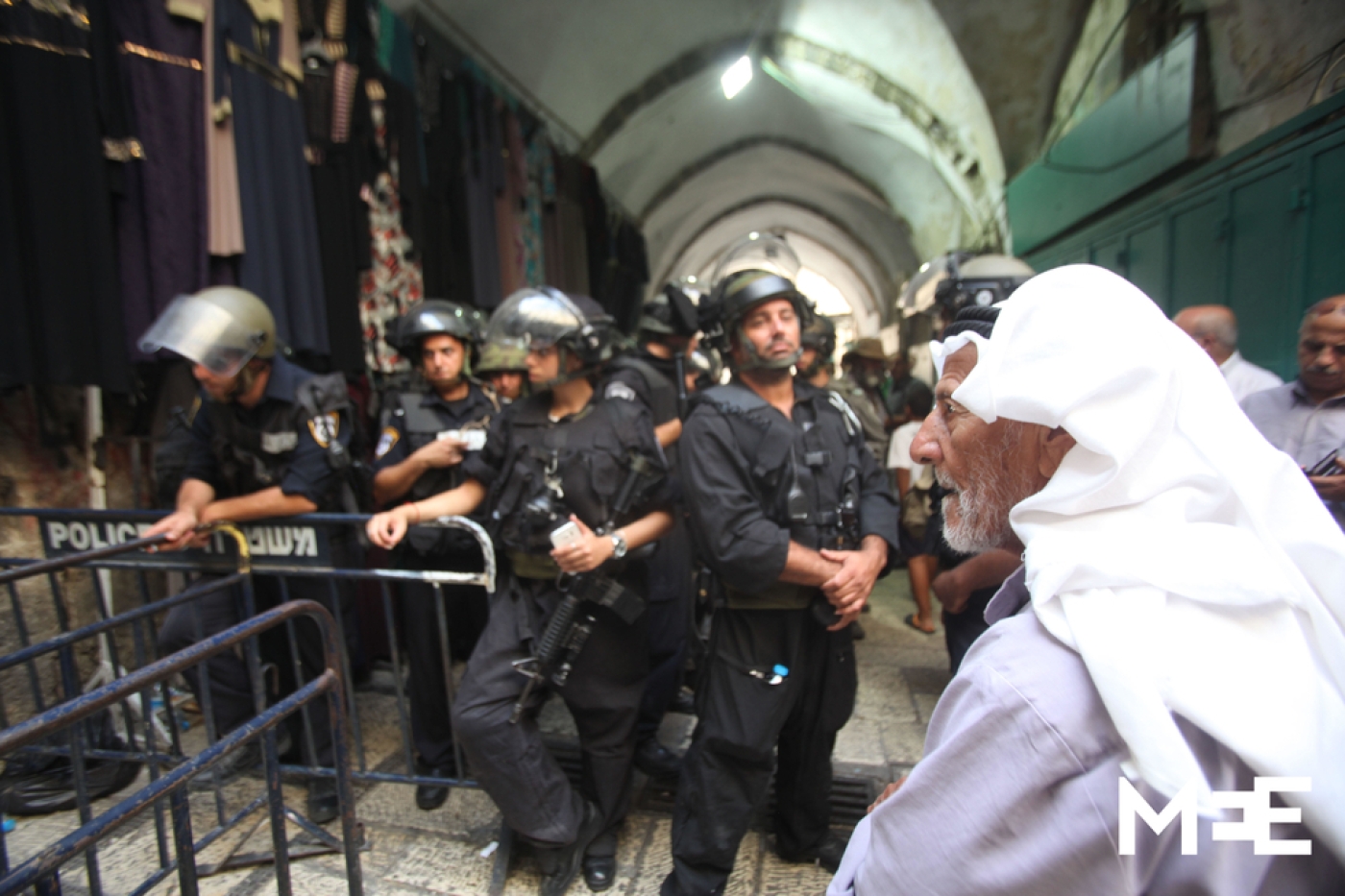 Israeli police set up checkpoints across Jerusalem's Old City on Friday, preventing young men and others from going to the Al-Aqsa Mosque (MEE/Mahfouz Abu Turk)
By
Sheren Khalel

The increase in forces came amid rumours that youth were planning protest actions at the compound in opposition to recent heavy restrictions on Palestinians from entering the site, as well as right-wing Israelis being granted access to repeatedly tour the compound.

Protests against the recent upheaval at the Al-Aqsa Mosque compound have continued to intensify across the West Bank and East Jerusalem for several weeks.

No injuries were reported in the bus incident.

On Friday, Israeli forces stood guard at the Al-Aqsa compound gates, forbidding entry to all men under 40, who instead lined up in masses to pray on the ground and surrounding streets of the Old City.

There was relative calm at the heavily guarded flashpoint site during the morning hours, but clashes erupted following midday prayer, with Israeli forces firing tear gas and rubber-coated steel bullets at Palestinians who hurdled rocks and Molotov cocktails back.

By the evening Israeli media reported four Israeli soldiers were injured in East Jerusalem during clashes.

According to Israeli newspaper Haaretz, the four Israeli soldiers were moderately to lightly wounded by firebombs thrown at them in the Jabal Mukaber neighborhood of occupied East Jerusalem. There were also unconfirmed reports of Palestinians shooting live-fire at Israeli forces in the area.

[Later on Friday, local media reported that a rocket fired from Gaza had landed in the southern Israeli city of Sderot. According to an Israeli police spokesman, the rocket landed near an empty bus, causing damage to the vehicle but no injuries.]

Tensions have been steadily intensifying, as right-wing Israelis have been increasingly allowed to tour the compound, despite objections by the Islamic Endowment, the religious body under Jordanian administration that is supposed to have control of the site.

In 1967, after Israel’s annexation of East Jerusalem, Israel made an agreement with the endowment that stated that non-Muslim prayer at the compound would be forbidden - the key issue at the crux of the violence that has gripped the region in during the last two weeks.

Since the end of August, Muslims have reported that they have been barred from entering the Al-Aqsa Mosque compound between the hours of 7am and 11am. The time has instead been used to allow right-wing Israeli groups to tour the compound.

Safah Nassir, a resident of East Jerusalem, said she is heartbroken over the recent restrictions and fighting around the holy sanctuary.

“The Al-Aqsa is supposed to be a holy, peaceful place for Muslims,” Nassir said. “I go to pray there every Friday. We don’t want to make trouble there, we don’t want fighting there, but when my family tries to go to pray it is our right, and they are taking our right away from us to give privilege, yet again, to Israelis who have no right to be there. It is one step too far by the occupation.”

Nassir believes clashes will continue until the status-quo is restored, extra restrictions are lifted, and Palestinians are assured that Jews will be forbidden to pray at the compound.

“I can’t imagine that the clashes and fighting will stop until this nonsense stops. Palestinians won’t let go of Al-Aqsa, this will be Israel’s losing battle,” she said.

The director of the Al-Aqsa Mosque compound, Omar Kiswani, told Middle East Eye that he and Azzam al-Khatib, the director of the Islamic Endowment, have fiercely rejected the presence of “right-wing Jews” touring the site.

“When you are guest or a visitor, you ask permission first, but these so-called visitors never asked our permission, and that makes them invaders, not visitors and not guests,” Kiswani said, heatedly. “We know these people are coming because they want to hold Jewish prayer at the compound, not tour it, and this is expressly forbidden. We cannot stand for this, and we will not ever allow non-Muslim prayer at the Al-Aqsa.”

The Al-Aqsa Mosque compound is revered by Jews as the Temple Mount, the most holy place in Judaism. As such, many right-wing organisations have called for the construction of a holy Jewish Temple on the site.

Since the start of the reported 7am to 11am schedule for Jewish visitors, Palestinians have expressed concern that Israeli authorities plan to create a programme that allows Jews and Muslims to share the site, similar to Hebron’s Ibrahimi mosque, known by Jews as the Cave of the Patriarch, which was partitioned off in 1994 and is now tensely shared by Muslims and Jews.

For Muslims the Al-Aqsa Mosque compound is the third holiest place place in Islam, but Palestinians see Al-Aqsa as a national symbol as well.

Nadim Shebli, a political science student at Al-Quds (Jerusalem) University told MEE that the recent upheaval at the Al-Aqsa Mosque compound has dominated discussions between both students and professors as a political discourse, not a religious one.

“Al-Aqsa is for Palestinians, not just Muslims, you don’t have to be Muslim to be angry over what the Israelis are doing there,” Shebli said. “Everyone at my university and everyone in my community is very angry about what’s happening. At school the students and professors agree that we’re just waiting for a sort of point zero, for something very big and bad to happen.

“This is a political issue, not a religious one,” Shebli continues, “Israel is just using its crazy extremist to make a political statement look religious, and this can’t end well.”

Kiswani also said he feared something bigger was on the horizon if the crisis at Al-Aqsa is not settled soon.

Exactly 15 years have passed since Ariel Sharon’s historic visit to the Al-Aqsa Mosque in September 2000, in the lead up to elections for Israeli prime minister. The visit is the seen as the spark that ignited the Second Palestinian Intifada, also known as the Al-Aqsa Intifada, that changed the lives of both Israelis and Palestinians across the divided territories.

Kiswani said that he believes the recent violence at the the compound is putting both Palestinians and Israelis in a situation that could lead to a repeat of history.

“What is happening right now is coming dangerously near what happened 15 years ago, it's not Sharon, but it’s these very extreme Israelis that are pushing their way into the compound, without permission, to start this controversy,” Kiswani said this week. “If this doesn’t end, I will not be surprised if this leads to something very much bigger than sparks of clashes.”