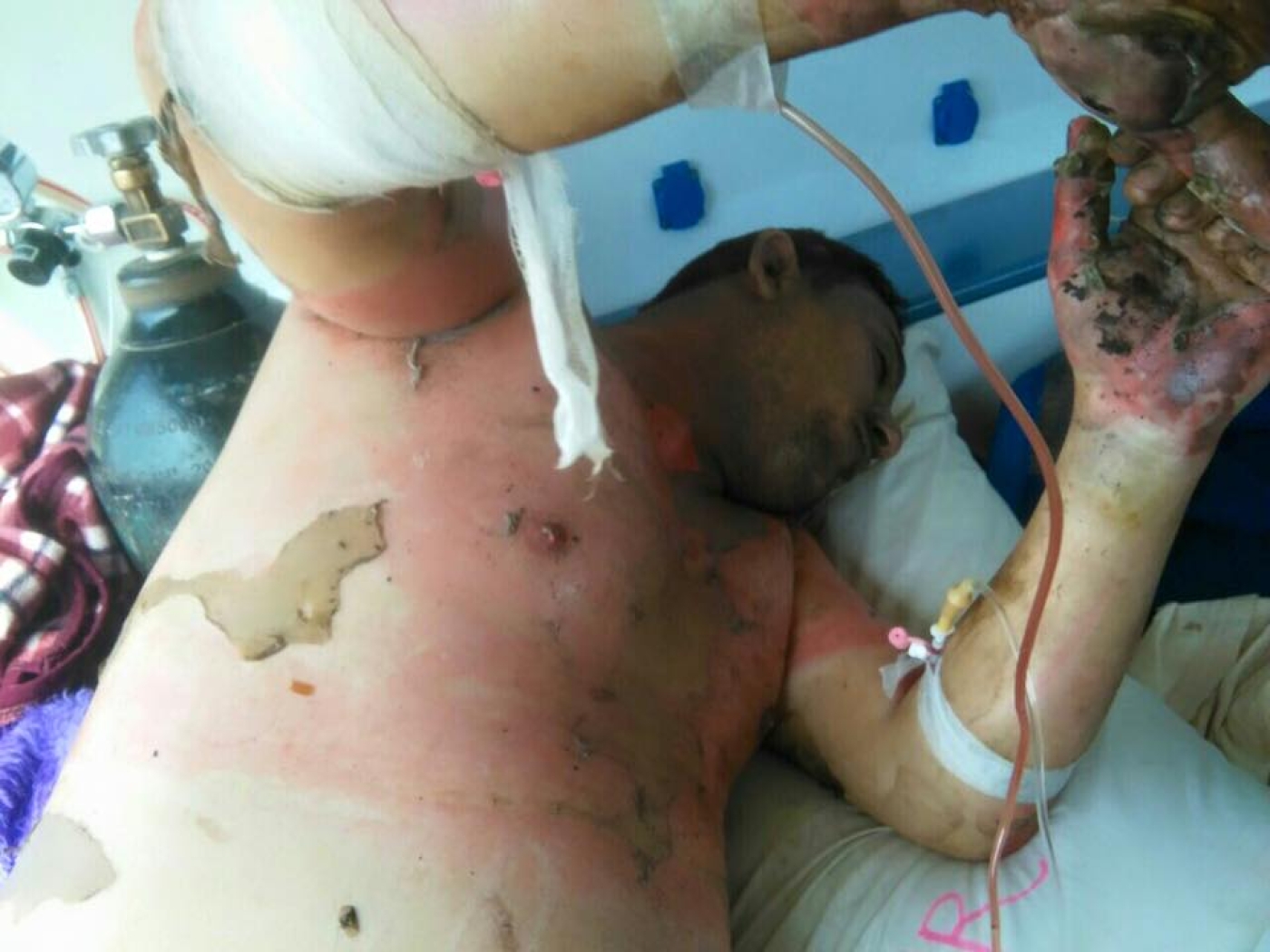 Younes al-Asakirah, an Ahwazi Arab, in hospital after setting himself on fire to protests against the Iranian authorities' confiscation of his fruit and vegetables stall (Facebook)
By
Mamoon Alabbasi

A number of protests and clashes with security forces have rocked Iran's resource-rich Ahwaz region, where the country's Arab minority are predominately located, in the past week.

Hundreds of people on Monday took part in the funeral procession of a street vendor who had set himself on fire on 14 March in protest at the Iranian authorities' confiscation of his fruit and vegetables stall.

Younes al-Asakirah, 34, died on Sunday, leaving behind a wife and two children, whom he was trying to support via his stall in the Arab city of Mohammarah (the city’s historical name that inhabitants insist on using, but the state refers to it as Khorramshahr) in Ahwaz, local activists reported via social media.

Iranian riot police were on the scene, making a number of arrests, after mourners took to the streets chanting anti-government slogans.

Authorities pressured Asakirah's family, and delayed handing over his body, in order to make the funeral low-key so as not attract protesters. However the government's attempts appeared to have failed.

The authorities were reportedly clearing away unlicensed stalls ahead of state-organised tours bringing visitors from other provinces to Mohammarah, to show them the sites of destruction that remain from the Iraq-Iran war (1980-88).

"After the Iraq-Iran war ended, Mohammarah was deliberately left in ruins, making it impossible for some refugees to return back to their homes," Amir Saedi, a rights campaigner and a medical graduate based in London, told MEE.

"In addition to the families who have been displaced for decades, those who have remained in Mohammarah also find it difficult to make a living in an area that the regime wants to keep using as some sort of an 'open war museum' for propaganda purposes," he added.

Prior to Asakirah's death, the region was also rocked by anti-government protests, after security forces sought to crack down on football fans chanting pro-Arab slogans at a football match on 17 March.

Fans at the football match, which was between the local Foolad Khuzestan and Saudi Arabia's al-Hilal, were allegedly stressing their Arab identity in slogans welcoming the visiting team.

Scores of fans were arrested after burning pictures of the late Ayatollah Ruhollah Khomeini and Ayatollah Ali Khamenei, the country's "supreme leaders".

It is not the first time the Ahwazi youth have held anti-government protests following a football match. "Even recent football matches have turned into mass protests," noted Daniel Brett, an observer of the Ahwaz region, in a column published in the Huffington Post last year.

The tensions in Iran's Arab region appear to have spread to London, where a number of Ahwazi activists protested on Tuesday in front of the BBC’s Persian service building, alleging that the British broadcaster is failing to report on the mounting unrest.

On the same day as the London protests, where police reportedly stopped the activists from entering the building to hand a letter of complaint to the management, the BBC did publish a report on the funeral of Asakirah. Inside Iran
Iran continues to boast of its regional reach