Germany is expected to take record 800,000 people fleeing war and poverty this year A refugee holds a picture of German Chancellor Angela Merkel after the arrival of refugees at the main train station in Munich, southern Germany, on 5 September 2015 (AFP)
By
MEE and agencies

Germany on Sunday readied for hundreds more refugees to arrive from Hungary via Austria, a day after thousands were greeted, often by volunteers holding signs that read "Welcome to Germany".

The most populous EU nation, which this year expects to take in a record 800,000 people fleeing war and poverty, has seen an unprecedented volunteer effort to help the newcomers.

In Munich, refugee families holding their children and few belongings smiled as they were greeted with cheers, food and water bottles by crowds.

As refugees got off trains, police directed them to waiting buses to take them to temporary shelters, which have been set up in public buildings, hotels and army barracks across the country.

Dozens of people, standing behind barriers, whistled, clapped and filmed the newcomers with their mobile phones.

"The people here treat us so well, they treat us like real human beings, not like in Syria," said Mohammad, a 32-year-old from the devastated town of Qusayr, whose eyes welled up with tears as he spoke.

While Germany has seen a spate of ugly xenophobic rallies and attacks against foreigners, it has also seen an outpouring of support, donations and volunteer efforts by people who believe Germany, given its dark history and current wealth, has a special obligation to help refugees.

At Frankfurt railway station overnight, food, water and clothes were piled high for the newcomers, while hundreds of people thronged the platforms.

When the doors of the trains opened, people cheered and whistled and a chant went up in English: "Say it loud, say it clear, refugees are welcome here."

One man, an Egyptian, who gave his name as Mustafa and said he had been living in Frankfurt for 20 years, was carrying an Arabic-language cardboard sign which he said spelled "warm welcome".

Lara Sabbagh, a volunteer for an organisation called Kleeblatt based near Frankfurt, acted as a translator for some of the Syrian refugees.

She told bystanders to stop taking photographs, saying: "They’re afraid. They say they've just fled from their country and their ruler and don’t want to be photographed".

She added that many of the migrants "didn’t understand all the commotion here. They asked me, ‘What are all these people doing here? What do they want?’ They didn’t understand that people were here to welcome them."

Meanwhile, the British government is poised to accept 15,000 Syrian refugees and hopes next month to get backing for air strikes against Islamic State jihadists, the Sunday Times reported.

Prime Minister David Cameron has been under pressure internationally and domestically to address the refugee crisis.

On Thursday, he said he was "deeply moved" by images of three-year-old Syrian toddler Aylan Kurdi, found dead on a Turkish beach.

He also hopes to persuade MPs in the opposition Labour Party to back air strikes in Syria in a vote early next month, it said.

The paper previously reported that there was an option to directly accept refugees from UN camps on the Syrian border.

Britain has accepted 216 Syrian refugees under a special government scheme over the past year and around 5,000 Syrians have been granted asylum since the conflict there broke out in 2011 - far fewer than countries like France, Germany and Sweden.

Britain has also opted out of a quota system for relocating asylum seekers within the European Union despite growing calls in the EU for fairer distribution.

More than four million Syrians have fled the war.

Cameron gained support for military action against Syria from an unusual source on Sunday - former Archbishop of Canterbury, the leader of the world's Anglicans, George Carey.

Britain should help "crush" the Islamic State and "air strikes" may be needed, Carey said.

"I do not consider it enough to send aid to refugee camps in the Middle East. Rather, there must be renewed military and diplomatic efforts to crush the twin menaces of Islamic State and al-Qaeda once and for all," he wrote in the Sunday Telegraph. 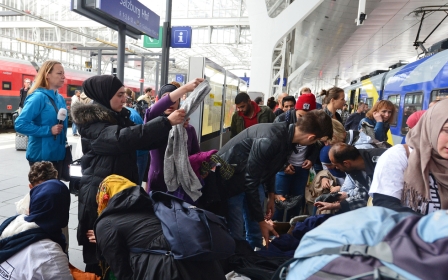