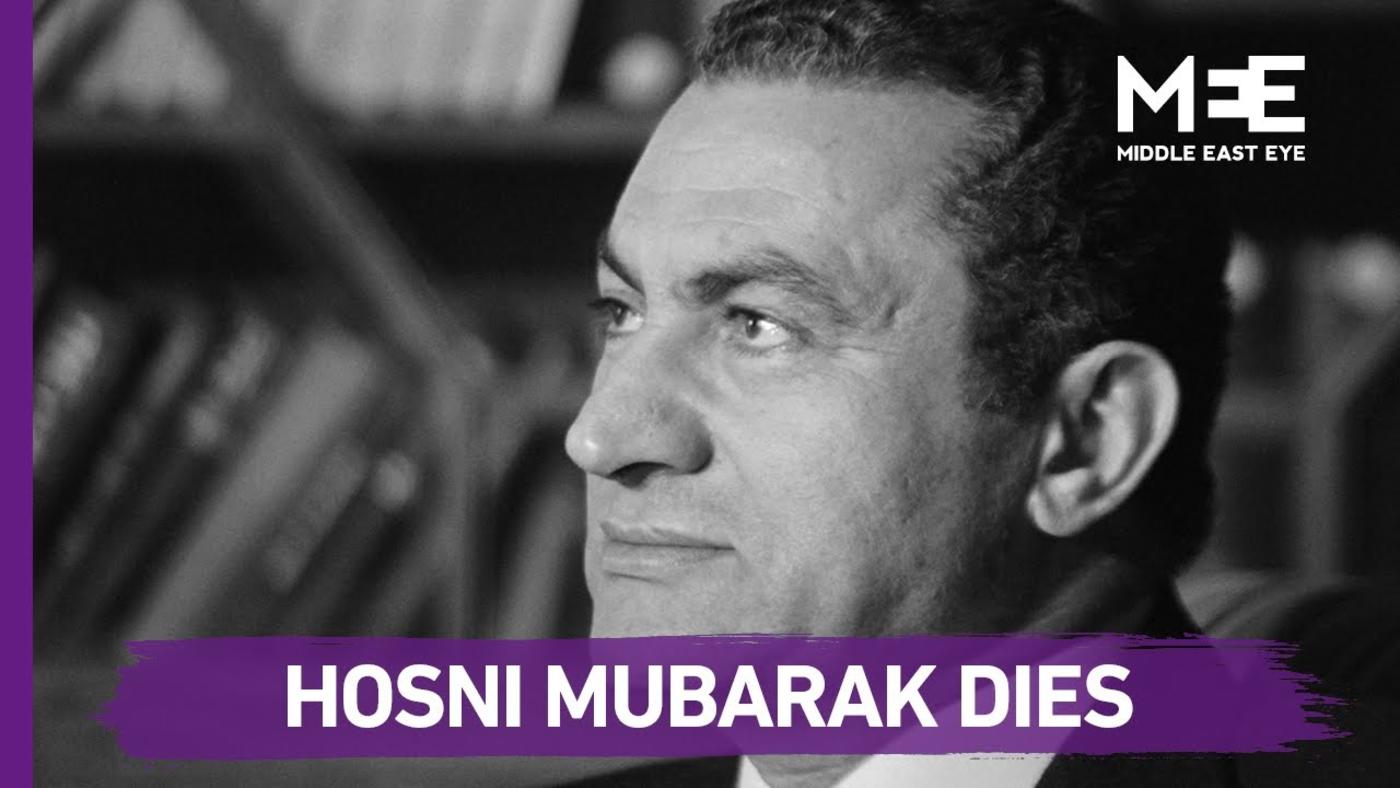 The former air force commander first came to power in 1981 after the assassination of his predecessor Anwar Sadat, and ruled for 30 years until huge popular protests forced him from office.

Though he was then jailed facing a number of charges, Mubarak was acquitted of most of them and freed in 2017, with Egypt now under military rule. He was originally convicted in 2012 for conspiring to kill 239 demonstrators during the 18-day uprising and sentenced to life in prison.

13 October 1981: Mubarak, then vice-president, is declared president of Egypt one week after the assassination of his predecessor Anwar Sadat.

He then declares emergency law, which remained in place throughout his rule.

Mubarak also announces that Egypt will uphold its 1979 peace treaty with Israel, and becomes a US ally, receiving billions of dollars in military aid.

April 1982: Israel withdraws from Sinai, in accordance with the 1979 peace treaty with Egypt.

February 1986: an uprising by police conscripts who demanded better wages leads to the death of 107 people and wounding of 700 others.

May 1989:  Egypt is readmitted to the Arab League, having been dismissed in 1979 for making peace with Israel.

17 November 1997: Egypt’s largest militant organisation, the Islamic Group, kills 58 tourists and four Egyptians near the historic town of Luxor in Upper Egypt. Mubarak responds with a massive crackdown that crushes the group.

5 October 1999: Mubarak is sworn in as president for his fourth term.

22 December 1999: Egypt agrees to sell its natural gas to Israel for the first time. Israeli Prime Minister Ehud Barak calls the agreement a “Pipeline of Peace”.

March 2005: Hundreds of Egyptians defy Mubarak’s bid to run for a fifth term, and an Egyptian opposition group Kefaya (Enough) leads a popular movement to opposing him.

The state launches a sweeping crackdown on the largest opposition movement the Muslim Brotherhood, arresting hundreds of members and supporters.

27 September 2005: Mubarak is sworn in for a fifth term in a vote marred by absence of monitors and exclusion of Mubarak’s only pro-democracy rival Ayman Nour.

Nour was arrested after announcing his intention to run for presidency in January 2005 but was later freed in March and allowed to campaign following US pressure on the Egyptian government.

Nour received the second-largest number of votes after Mubarak, but the elections were widely criticised as corrupt. He was arrested again, remaining in custody until 2009.

December 2005: The Muslim Brotherhood wins a fifth of parliament seats despite a vote marked by widespread rigging. Mubarak’s party, the National Democratic Party, retains a majority.

19 November 2006: Mubarak says in a speech he will remain president for the rest of his life.

March 2010: Egyptian opposition forces from across the political spectrum rally behind Mohamed el-Baradei’s campaign to end emergency rule and allow for democratic elections in the country.

El-Baradei, former director of the International Atomic Energy Agency and Nobel laureate, becomes a leading face in the pro-democracy movement.

April 2010: El-Baradei says he is seeking to become an "agent of change and an advocate for democracy" within Egyptian politics.

November 2010: the last parliamentary elections during Mubarak’s rule are held. Opposition parties, including the Muslim Brotherhood, denounce the vote as completely rigged in favour of Mubarak’s party. The opposition wins zero seats.

25 January 2011: Thousands of anti-government protesters take to streets to denounce police brutality after an online campaign against the torture to death of young Egyptian Khaled Said by police officers.

The protests quickly turn into a nationwide public display of anger against Mubarak’s rule.

28 January 2011: Millions take to the streets countrywide demanding the ousting of Mubarak. Hundreds of protesters are shot down by police forces.

11 February 2011: Mubarak steps down, handing over power to the military.

13 April 2011: Mubarak and his two sons are arrested on charges of corruption and killing of protesters.

3 August 2011: Mubarak appears in court for the first time, and denies all charges against him.

5 September 2011: Police officers who were expected to testify against Mubarak deny his responsibility for the killing of protesters during the revolution.

2 June 2012: Mubarak is sentenced to life in prison. A judge says that there was no proof that Mubarak ordered the killing of protesters. He also acquits him and his sons of corruption charges. Thousands take to the streets to protest the decision as a sham trial.

16 July 2012: Mubarak is transferred from a military hospital to Tora prison after a prosecutor finds him medically fit to leave hospital.

13 January 2013: An appeals court orders the retrial of Mubarak for all the charges against him, reversing the life sentence he received a year earlier.

19 August 2013: A court orders the release of Mubarak. Three days later, he is transferred from Tora prison to Maadi military hospital.

22 February 2020: A court acquits Mubarak’s sons of illicit share trading during the sale of a bank four years prior to the uprising.

In a statement, the presidency called Mubarak a "military leader and war hero", and offered his family condolences. Meanwhile, the armed forces described him as "one of its sons and a war leader".

Mubarak's rule was renowned for its autocracy and cronyism, and his administration kept close ties with Washington, from whom Egypt received billions in military aid.

He also maintained tacit relations with neighbouring Israel, and was lauded by Israeli Prime Minister Benjamin Neatnyahu on Tuesday.

"On behalf of the citizens and government of Israel, I would like to express deep sorrow on the passing of President Hosni Mubarak. President Mubarak, my personal friend, was a leader who led his people to peace and security, to peace with Israel," Netanyahu said in a statement.

However, Morsi was also removed in a 2013 coup that ushered in a new period of military rule under President Abdel Fatteh el-Sisi that critics say is even more autocratic and repressive than Mubarak's.

Though Mubarak was freed, Morsi died after collapsing in court last year, following years of detention in harsh conditions that were deplored by rights groups.

Ayman Nour, who ran against Mubarak in the 2005 presidential election, told Middle East Eye he had been jailed by the autocrat, "as a punishment for that decision".

"Confronting people while they are alive is different from after their death. Therefore, personally I forgive Mubarak for his injustice towards me," he said.

"However, concerning his injustice towards Egypt and the rest of the Egyptians, he is now going to face divine justice."

Amr Darrag, a former minister and politician who opposed Mubarak and helped draft the first constitution after the president fell, bemoaned the lack of justice in Mubarak's trials.

"We will always remember that Mubarak is directly responsible for the collapse of political life and enshrining corruption throughout the 30 years of his rule," he told MEE.

Those sentiments were echoed by Islam Lotfy, a leading member of the youth alliance that organised the 2011 Tahrir Square protests.

"I am sad not because he died but because he passed away without receiving a fair trial for his responsibility for corrupting political and economic life in Egypt and the country’s failure on all fronts," he told MEE.

"My only regret is not having a judicial system that prosecuted him for his crimes. The trials against him after 2011 have been no more than a farce aimed at containing people’s anger."

'A legacy of nothing'

Dr Wael Haddara, who served as senior advisor to Morsi, said Mubarak was a prototype for "a particular kind of Arab leader".

"He demonstrated how one man can rule for 30 years while accomplishing nothing for his country, building nothing and leaving a legacy of nothing, but corruption and waste," he said.

"The contrast in the treatment he received compared to that meted out to President Morsi both in life and death is a stark reminder of the immense injustice plaguing Egypt today."

But far from a legacy of nothing, Amr Khalifa, an Egyptian journalist and political analyst, said those working in politics in the Egyptian sphere are still suffering from Mubarak's "systemic decimation of the political class". "Any efforts to build a political body to stand against the monolith of army rule runs into that Mubarak Bar-Lev line," said Khalifa, referring to the fortifications Israel built along the Suez Canal during the 1967 Middle East war.

"The Egyptian intelligentsia, for the most part, is inexperienced because the highly strategic Mubarak made sure it would be so."

Osama Gaweech, an Egyptian journalist and presenter at Al-Hiwar TV channel, told MEE he was happy for one of the region's dictators to be gone, but he, too, sees Egypt very much in the shadow of Mubarak.

“The problem is that he left a political legacy … and this legacy led to the current military regime. We can’t separate between these two regimes. It’s continuous between Sisi and Mubarak.”

Nonetheless, Gaweech said he will always be proud that he demonstrated against Mubarak. “We will tell our children what we did to this tyrant. We put Mubarak in jail. With a corrupt judiciary and the military and the police, he became free...but we succeeded to force him to step down and we are all proud of that.”

A military source told Reuters that the former air force officer will be buried in a military funeral, with the timing unclear.