Many Yazidis endured threats while working as translators for US forces in Iraq, but now they fear Donald Trump has abandoned them 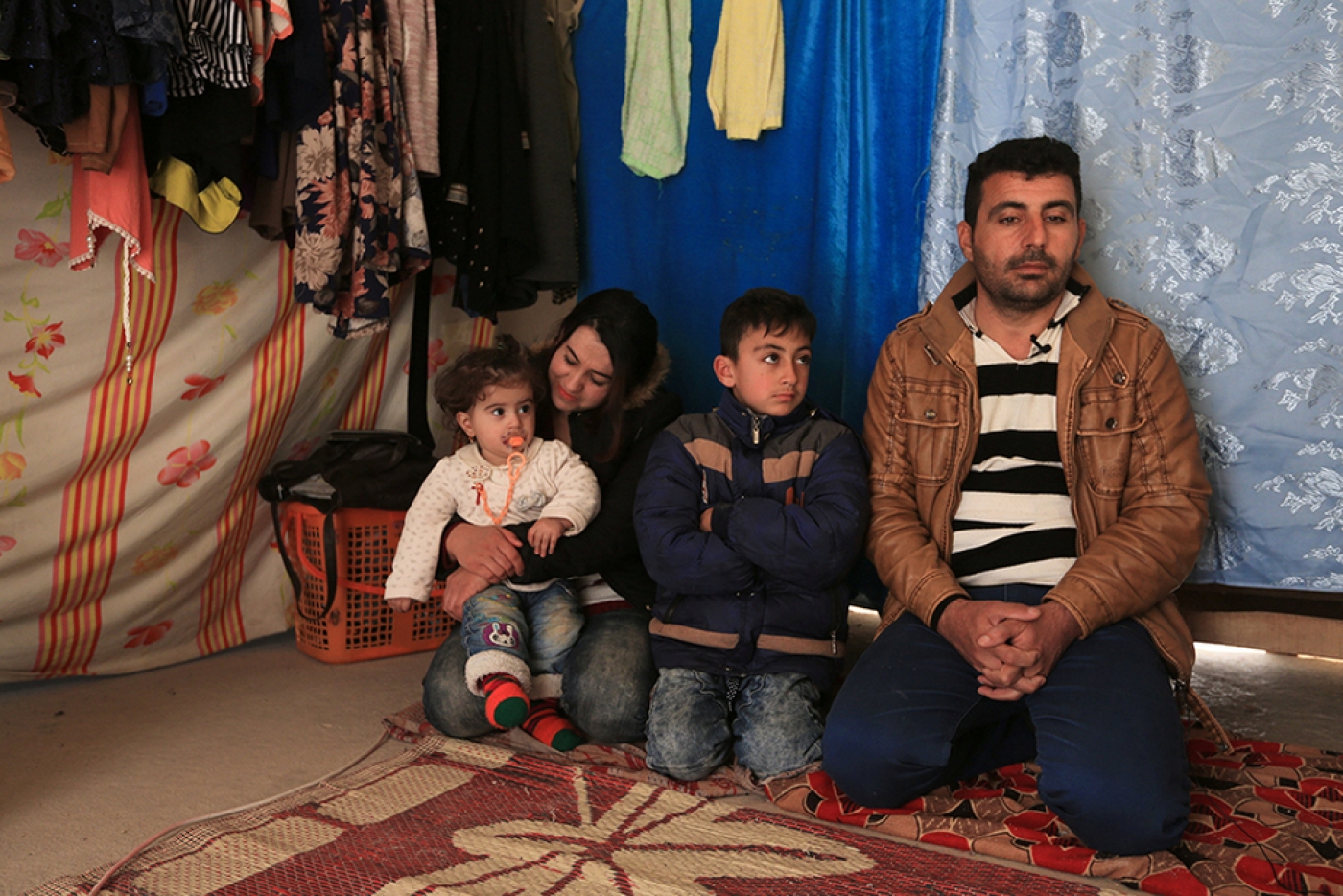 Khudeeda Rashowka Naif and his family, who are Yazidis, pictured in a refugee camp in Dohuk. The family had hoped to resettle in the US (Reuters)
By
Sam Kimball

DOHUK, Iraq - For nearly four years Sharief Mirza, a 29-year-old doctor living in the city of Dohuk in Iraq’s semi-autonomous Kurdish region, had patiently filed paperwork and attended interviews with the hope of one day moving to the United States.

Mirza is originally from the mountainous town of Sinjar near Iraq’s border with Syria and a member of the Yazidi minority that lived there alongside Sunni, Shia and Christian inhabitants. But he was forced to flee Sinjar even before the Islamic State (IS) group swept through the region in August 2014, killing thousands of Yazidis and forcing many more to flee to refugee camps.

Like many Yazidis, Mirza believed that America offered an escape route. One reason was that his brother, along with others in the marginalised religious minority community, had worked as a translator for US forces during the occupation of Iraq, bringing threats against family members.

“In 2013, I opened my case [for immigration to the US]. Up until now, US officials have done reviews and reviews about me. I’ve done two interviews. They’ve asked me everything,” he told Middle East Eye.

By last month he had finally obtained a visa to travel and was preparing to fly. He was even supportive of then-president-elect Donald Trump and his fiery rhetoric against IS.

While Trump's executive order banning citizens from Iraq and six other Muslim-majority nations is currently embroiled in legal wrangling, which has opened up a window for some travellers from the affected countries to get into the US, Mirza said he feared his best hope of ever finding safety had been dashed.

“National security, for any country, is important. At first Trump said, ‘I’ll save national security’. This is right, to protect his country from terror. You know, terror is all over the world now,” said Mirza.

But he added: “I don’t think this decision will prevent terrorists from entering the US. I don’t see any Iraqis who have committed terror attacks in the US.

“[The ban] is just preventing people that need to go to the US from going. It’s stopping people from going there to live freely.”

Mirza said there were many reasons why he needed to flee his homeland. Beyond religious persecution, he said that his brother’s history of working with the US military in the aftermath of the invasion of Iraq in 2003 had made life for the family unbearable.

For many Yazidis in Sinjar such work offered a way to escape the poverty of their community.

But Mirza said that members of the family soon started receiving threats, even from their neighbours.

“In one day, these neighbours, with whom we lived in peace, became our enemies,” he said. “Every day the developments in our village made our future in the Yazidi community look worse and worse.”

Beyond Sinjar, Yazidis faced other dangers. In 2007, Mirza was studying medicine at a university in Mosul, Iraq's second city and now the scene of a protracted battle between IS and the Iraqi security forces and their allies.

At the time, al-Qaeda in Iraq, the group which eventually became IS, was leading a major insurgency against US forces, and controlled much of the city.

Yazidis speak Kurdish and are often grouped with Iraq’s Kurds. But their religion, which blends elements from ancient Assyrian religions, Islam, Christianity, Judaism and Zoroastrianism, is considered polytheistic and heretical by groups such as IS, and makes them a target for violence.

Al-Qaeda demanded that all Yazidis leave the city or be executed. Mirza and his Yazidi student colleagues fled, and spread out among the cities of Kurdish-controlled Iraq to continue their studies.

Mirza’s friend Hasan Kifah, 28, a Yazidi engineer also from the Sinjar area, also applied for resettlement in the US last year.

Like Mirza, Kifah’s brother was a translator for the Americans. Kifah claims his brother was the first in Sinjar to sign up.

For years, he said, the family faced threats from Sunnis living in Sinjar as a result of his brother’s work.

After Kifah was attacked because of his brother’s work and his religion, he left his engineering studies in Mosul.

When asked why the American soldiers in Mosul didn’t do more to protect the families of those it worked with, Kifah said, “The US couldn’t take care of its own troops, so how would they protect a translator?”

For both Mirza and Kifah, IS’s murderous assault on Sinjar in 2014 was simply the final straw in a string of traumatic events. Mirza’s entire family narrowly escaped the massacre by fleeing across the border into Syria, while Kifah’s home was burned down.

Thamir Elias, 26, a Yazidi activist and founder of the aid organisation Humanity, believes Trump’s efforts to ban Iraqis from entering the US will have broad consequences for persecuted Yazidis.

“A lot of Yazidis in Sinjar working with the Americans weren’t doing their paperwork to come to the US. But after the [IS] massacre of August 2014, they immediately began working on it.”

Elias noted the growth of a burgeoning Yazidi community in the US city of Lincoln, Nebraska, where Yazidis have sought safety and freedom over the last two decades.

But, he noted: “A lot of them got their paperwork and were about to travel to the US. The day the decision was ordered, a lot of Yazidis came back from the airport who had been planning to go.”

Yazidi asylum seekers in the US, he said, have the right to take their immediate family members with them. If only 100 Yazidi interpreters are barred from entry, it affects thousands of family members, said Elias.

“We are talking about thousands of Yazidis who are affected and now cannot go. Even though people say they’re working on excluding those with special immigrant visas [from the International Organisation for Migration] from that [executive] order, I don’t have any hopes for that.”

For now, conditions for Yazidis who have taken refuge inside Iraq's Kurdish region are relatively secure, but Elias said many Yazidis had lost trust in the Kurdish authorities.

He believes that the withdrawal of the Peshmerga, the Kurdish armed forces, from Sinjar during the IS assault left a permanent wound among Yazidis.

“You know, a lot of people in Sinjar, they said, ‘We were left by the Kurds. They were the last group protecting us’. That killed 90 percent of the trust. They believe they were left in the hands of IS because they were Yazidi.”

Trust in the Americans had also been damaged, Elias added. And while many Yazidis remain desperate to get to the US, scepticism - already deep among some - that the country cares about their fate has only spiked since Trump’s executive order.

When IS stormed Sinjar in 2014 and Yazidis took refuge at the top of Sinjar Mountain, the US and its international allies did not intervene to prevent the killing of thousands below.

“For 12 days or 15 days, [IS] were calling. They were giving a date by which we converted or got killed, and we were asking the international community to help us,” said Elias.

“So Yazidis say, ‘The Americans can see an insect from up in space, but they cannot see thousands of ISIS cars surrounding a Yazidi place? So they ask, ‘But why? What will happen to us next?’”