The boat, holding mostly migrants from sub-Saharan Africa, was en route to Italy when it sank The death toll from a ship packed with African migrants that sank off the Tunisian coast last week has risen to 53 after authorities recovered all of the bodies, state media reported.

The Tap news agency said on Thursday that all of the passengers, including the boat's Tunisian captain, had died after the boat capsized near the Kerkennah islands.

Brigadier General Murad al-Mashri, director of civil defence in the coastal city of Sfax, said that authorities were trying to identify the dead, adding that most of them are of African descent.

Investigations had revealed that the wreck occurred between 4 and 5 June, and authorities were alerted to it on 9 June after fishermen operating in the area discovered floating bodies. 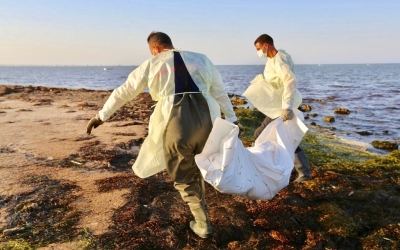 Tunisian news website Webdo reported that at least 23 women were among the victims, along with two children.

Italy has long been established as the primary European port of entry for migrants seeking refuge from Africa and the Middle East.

Still, in April, Italy declared its ports "unsafe" because of the coronavirus pandemic and said it would not allow charity ships to disembark migrants and refugees.

Hanan Hamdan, Tunisia's representative for the UN High Commissioner for Refugees (UNHCR), said she was "concerned about this new trend in departures," adding that authorities need to "provide people with meaningful alternatives that can prevent extreme choices in the search for a better life."

Tunisian National Guard spokesman Houssemeddine Jebabli said last week that 140 undocumented migrants had been arrested after being found to have entered the country illegally.