A figure whose career spanned the Ben Ali and Bourguiba eras, Essebsi will also be remembered as one of the founders of Tunisian democracy 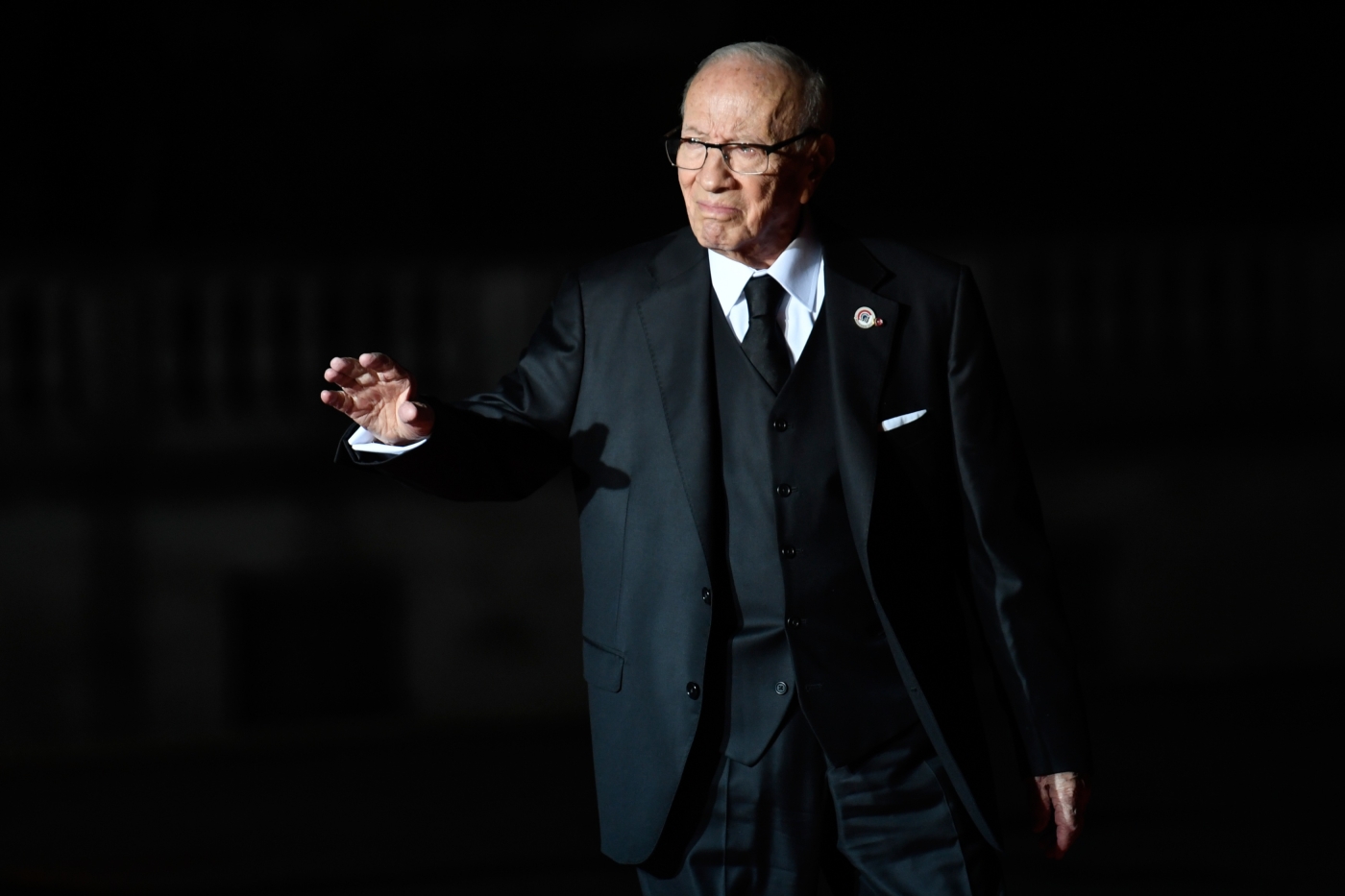 Tunisian President Beji Caid Essebsi, a key political player in the country for several decades, has died at the age of 92.

Essebsi, one of the oldest heads of state in the world, died on Thursday after his son said he had been admitted to hospital and placed in intensive care. His death was announced on the Tunisian presidency's Facebook page.

He is survived by his wife of more than 60 years, Chadlia Saida Farhat, and four children - Amel, Salwa, Khelil and Mohamed Hafedh - the latter being involved in politics alongside his father over the past few years.

Sarah Yerkes, a Middle East programme fellow at the Carnegie Institute, described Essebsi as "the most important political figure in Tunisia in the post-revolutionary era".

"His absence will be felt by all parties and all Tunisians," she told Middle East Eye.

In April, the elder statesman announced that he would not stand for re-election in the upcoming 17 November polls, saying it was time to make way for younger leaders.

His death leaves a power vacuum in Tunisia earlier than anticipated, however.

Born to a well-to-do family in the northern coastal town of Sidi Bou Said on 29 November 1926, Essebsi first entered politics at the age of 15 when Tunisia was still a French colonial protectorate.

Upon Tunisia's independence in 1956, Essebsi joined leader Habib Bourguiba as an adviser.

During Bourguiba's presidency, which lasted until 1987, he served as interior and defence minister, as well as director-general of the national police and Tunisia's ambassador to France.

Ben Ali was himself deposed in January 2011 following mass protests against his rule, a change that forced Essebsi to reinvent himself once again. This time, he reemerged as an experienced technocrat at the head of secular party Nidaa Tounes (Call for Tunisia).

"He was a polarising figure," Max Gallien, a researcher on the political economy of North Africa at the London School of Economics, told MEE.

He was viewed as "a skillful politician and source of continuity by some", he explained, while "by others as a remnant of the old regime who stretched Tunisia's constitution and the power of the presidency to a breaking point".

"I would imagine that with a longer view of history, he will be remembered not just for his presidency, but also for his role during the Bourguiba and Ben Ali regime, as well as his active resistance to the transitional justice process that engaged with that history," Gallien said.

Essebsi billed his party as an alternative to political Islamist movements such as Ennahda, which held a majority of parliamentary seats in Tunisia's first post-revolution government from 2011 to 2014.

Essebsi was 88 years old when he was elected president in 2014, claiming 55.86 percent of the votes to beat outgoing President Moncef Marzouki in a run-off ballot.

Rising to power at a critical time - as protests that reflected deep political divisions were taking place - Essebsi struck a conciliatory tone, promising in a brief speech after his victory to be "a president for all Tunisians". "He will be remembered for his tremendous ability to compromise," Yerkes told MEE.

Despite deep ideological differences, Essebsi was able to form a consensus government with Rachid Ghannouchi, the leader of the Islamist Ennahda Party.

For that, the pair "will be remembered as the founding fathers of Tunisian democracy", Yerkes said.

"They both put the country first, above their own political ambitions, and kept the democratic transition on track when it seemed sure to derail in 2013," she said.

Essebsi's five-year tenure was not without challenges, however.

During his term as president, Tunisia was rocked by sporadic, deadly attacks that claimed many lives and affected the country's tourism industry. Demonstrations also have repeatedly erupted amidst stagnant economic growth and high unemployment.

In March, an independent committee accused Essebsi of overseeing torture while serving as minister during the Bourguiba regime.

The report, issued by the group Instance Verite et Dignite (IVD), said Essebsi was complicit in the mass arrests and show trials of dissidents who were caught up in a crackdown following a botched 1962 military coup.

At the time, Essebsi's brother, Salah el-Din, was appointed as the government's defence lawyer; many people were sentenced to life imprisonment or even death in those military trials.

During his electoral campaign in 2014, Essebsi rejected the report's findings, however. He said he was against "settling scores from the past" and that the country needed to move forward.

Another IVD report issued earlier this year, which examined crimes committed by the state under Ben Ali, called on Essebsi to apologise on behalf of the government to all the victims of human rights violations since 1955.

'With a longer view of history, he will be remembered not just for his presidency, but also for his role during the Bourguiba and Ben Ali regime'

In 2017, critics panned the passage of a "reconciliation law" that pardoned Ben Ali-era officials, a move they said allowed many to evade accountability for abuses of power.

Yerkes said Essebsi "took some very controversial steps" and therefore, "will be remembered with a mixed legacy".

He walked a thin line, she said, "between moving democracy forward and protecting his own and his friends' and family's interests".

Perhaps one of Essebsi's most significant undertakings, however, was advocating for Tunisia to enshrine into law equal inheritance between men and women.

The legal amendments were pushed through as thousands demonstrated across the country against the bill, arguing that it was incompatible with provisions of Islamic law.

"In a conversation I had with him when he first announced his initiatives, he said that he could not have proposed such controversial laws at a younger age," Yerkes said.

"It was only because he was secure in his legacy and did not need to play politics anymore that he was able to take these risks."

His party, Nidaa Tounes, is fractured, a reality that led to the removal of Prime Minister Youssef Chahed from the party in September. Hafedh Caid Essebsi: Tunisia's presidential elections will be every man for himself
Read More »

But Yerkes said she doubted Essebsi's passing would change much for the political movement, which has been led by the president's son, Hafedh, since 2016.

"Nidaa Tounes is already so fractured and ineffective that it is unlikely to survive the next elections - with or without President Caid Essebsi," she said.

Instead, she said that remaining Nidaa Tounes supporters would switch over to other anti-Islamist parties, such as Tahya Tounes or Machrou Tounes.

In that case, Yerkes said the main question is, "What happens to his son, Hafedh Caid Essebsi?"

"His political future may end with his father's death." Tunisia Politics
Hafedh Caid Essebsi: Tunisia's presidential elections will be every man for himself