Tunisians go to the polls in 'historic' vote Polls opened Sunday morning in Tunisia's first presidential election since the 2011 revolution that sparked the Arab Spring, a ballot set to round off an often fraught transition to democracy.

In around 50 localities close to the Algerian border, where armed groups are active, polling hours were halved to lessen the likelihood of clashes or attacks.

Tens of thousands of police and army personnel have also been deployed to beef up security, amid concern that militants might seek to disrupt polling day.

Among the other candidates running are outgoing President Moncef Marzouki, business magnate Slim Riahi and Kalthoum Kannou, the country’s first female presidential candidate who is running under the slogan “Yes we Kannou.”

If no one candidate is able to secure an overall majority, a run-off will be held in December.

Speculation is rife that in the wake of the split result of October’s parliamentary election, Nidaa Tounes and Ennahda could enter into a coalition government, despite their fundamental differences on key issues.

No return to “tyranny and injustice” for Tunisia

As citizens took to the polls on Sunday Rachid Ghannoushi, whose Ennahda party did not field a presidential candidate, hailed the day as “historic.”

Ghannouchi said the day is a milestone that will "bring pride to Tunisians for generations to come."

"There is no fear of us paddling back to the days of tyranny and injustice. The people of Tunisia are forging their own destiny," Ghannouchi told reporters at a polling station in the north-eastern province of Ben Arous, where he cast his ballot.

"The presidential election is a step on a long road. What is needed today is that we continue on this road until Tunisia serves as a model civilization," he added.

Ennahda has refrained from fielding a presidential candidate in Sunday’s vote, and asserted that it would not back any of the 27 other candidates vying for office.

As he cast his ballot in the northern province of Ariana, 87-year old presidential hopeful Beiji Caid Essebsi echoed Ghannoushi’s message of optimism.

"I am hopeful that the voter turnout will be big. I'm sure Tunisia will continue with its democratic transition.”

He also vowed to "respect the people's will" as reflected by results from the poll.

Some 5.2 million people are eligible to cast their ballots, in a vote billed as the first free presidential election in the country that sparked the Arab Spring uprisings three years ago.

Turnout at the parliamentary elections in October was around 70 percent on average – however, there was a sharp contrast in voter engagement throughout the country’s provinces.

Participation was at around 48 percent in Sidi Bouzid, the central town where street vendor Mohamed Bouazizi set himself alight in 2011, sparking a wave of protest and revolutionary feeling across the region. 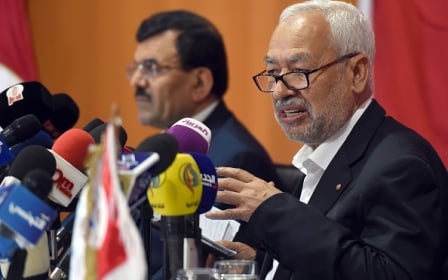 Tunisia Votes
What would a Nidaa Tounes-led coalition look like?