An overwhelming majority of Turks oppose the deployment of Turkish troops to the Kabul International Airport, a poll released on Friday indicated, as countries scramble to fly their nationals out of Afghanistan and vulnerable Afghans attempt to flee on planes.

Nearly two-thirds of the respondents said that Turkey should withdraw its troops from Kabul as US forces pull out from the country, according to the Metropoll survey conducted on 19-23 June in 28 provinces with 1,740 participants.

The Turkish public appears increasingly wary of the fraught mission: the share of the respondents who oppose the deployment increased by nearly 15 points compared with the results from May, rising from 47 to just under 62 percent.

Turkey has for the last few years been guarding the airport’s military section against external attacks. Ankara earlier this summer was close to striking a deal with the US to continue the mission but a sweeping Taliban takeover of the country dramatically changed the circumstances. Now Turkish officials are exploring ways to maintain their presence in the country by negotiating with the Taliban, in a bid to protect Turkish commercial and political interests.

President Recep Tayyip Erdogan earlier this week publicly declared that Turkey would like to remain at the airport through a deal with the Taliban or the transitional government, which, he said, could “strengthen Taliban’s position” in the international arena.

“Our agencies have been in contact with the Taliban for some time. We are ready to cooperate to protect the peace of the Afghan people, and the security of our Turkish kin that live in this country, and to preserve Turkish interests,” Erdogan said in televised remarks on Wednesday.

“We welcome the restrained and moderate statements released by the Taliban leadership.” 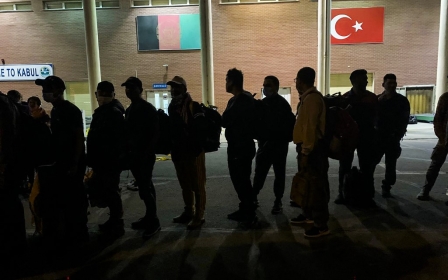