Lawmakers cast their votes during the second round of a debate on the proposed changes to the Turkish constitution, at the Turkish parliament in Ankara on 21 January, 2017 (AFP)
By
MEE and agencies

Turkey's referendum on constitutional changes, which could greatly expand President Recep Tayyip Erdogan's powers, will take place on 16 April, the election board officially confirmed on Saturday.

High Election Board head Sadi Guven said in a televised speech that the date was fixed after the law was published on the Official Gazette.

Erdogan signed the contentious law on Friday, clearing the way for public vote.

Guven said two colours - white and brown - would be used in ballot papers, representing "yes" and "no" respectively.

The 18-article new constitution could create an executive presidency for the first time in modern Turkey.

The president would have the power to appoint and fire ministers, while the post of prime minister would be abolished.

The government says the far-reaching changes are needed for more effective leadership, but opponents fear they will drag Turkey into one-man rule.

Erdogan is seen by critics as increasingly autocratic after 14 years in power as both prime minister and president.

Erdogan's supporters, however, see the plans as a guarantee of stability at a time of turmoil, with Turkey's security threatened by the wars in neighbouring Syria and Iraq, and by a spate of Islamic State and Kurdish militant attacks.

Seeking the support of nationalist voters, Erdogan has warned that those who vote against the changes will strengthen Turkey's enemies, including the Kurdistan Workers' Party (PKK) militant group, which has fought the state for more than three decades from camps in the Qandil mountains of northern Iraq.

The executive presidency was needed, Erdogan said, to avoid the fragile parliamentary coalitions of the past. He said the 65 governments in the 93 years of the modern republic had each lasted an average of just 16 months.

The two main opposition parties - the secularist CHP and the pro-Kurdish HDP - say the change would strip away balances to Erdogan's already considerable influence over government.

As in almost all of his speeches, Erdogan's comments on Saturday were broadcast live on multiple television channels and, as campaigning gets under way, opposition politicians fear they will be crowded out.

"This is definitely not going to be a fair referendum. We know that the pro-Erdogan media will have a broadcasting policy that completes ignores the opposition," CHP leader Kemal Kilicdaroglu told a roundtable with journalists in Ankara.

The CHP is Turkey's main opposition party and opposes Erdogan's proposed changes to the constitution.

"It will be presented as if we are running against the state," he said, adding that 90 percent of Turkey's media outlets were under government influence.

Devlet Bahceli. the veteran leader of the nationalist MHP, the fourth party in parliament, supports the plans, as do many of the party's MPs. 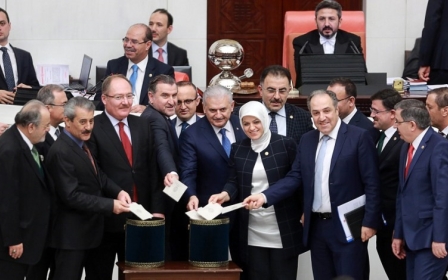