Those interrogated on Friday included the Saudi consul general's driver, technicians, a telephone operator and cleaning staff, all of whom are Turkish nationals. One female consulate employee told prosecutors that Saudi diplomats had warned her against speaking on the matter, according to Turksh sources.

The sources added that 25 other consulate staff members, Turkish and Saudi, are set give testimony next week.

In a telephone call, the leaders shared information on the independent investigations being conducted by Saudi Arabia and Turkey, Anadolu reported, quoting presidential sources.

Meanwhile, Turkish police searched a forest on the outskirts of Istanbul and a city near the Sea of Marmara for Khashoggi's remains, two Turkish officials said.

Investigators have also recovered “many samples” from their searches of the consulate and the consul’s residence, the senior officials told Reuters, and will attempt to analyse those for traces of Khashoggi's DNA.

Saudi Arabia has so far denied allegations by Turkish officials who have said Khashoggi was killed inside the building and his body removed. His disappearance and likely death has caused an international outcry and strained relations between Saudi Arabia and the United States and European countries.

Sources have told Middle East Eye that he was tortured, murdered and dismembered by a hit squad of 15 Saudi agents sent to Istanbul to kill him.

Authorities widened the geographic focus of the search after tracking the routes and stops of cars that left the Saudi consulate and the consul’s residence on 2 October, the day Khashoggi was last seen, the senior officials said.

Khashoggi’s killers may have dumped his remains in Belgrad Forest adjacent to Istanbul, and at a rural location near the city of Yalova, a 90km drive south of Istanbul, the officials said.

“The investigations led to some suspicion that his remains may be in the city of Yalova and the Belgrad forest, police have been searching these areas,” one of the officials said. A “farm house or villa” may have been used for the disposal of remains, the official said.

Early in the Turkish investigation, focus was given to the movements of 14 vehicles that came and left the consulate the day of Khashoggi’s disappearance.

Through watching footage of more than 150 CCTV cameras across the city, investigators have managed to pin down the whereabouts of the vehicles in the hours following Khashoggi’s apparent assassination.

At one point, a convoy of cars entered a parking lot and CCTV blackspot. Soon after, a black van with green diplomatic plates emerged, a source told MEE.

The source said that a few minutes after leaving the parking lot the van’s GPRS system was torn out and discarded on the road.

However, using CCTV footage, investigators have tracked the van’s journey north, past the Gazi woodland and Belgrad forest, and back into town.

Turkish investigators on Thursday also searched for a second time the Saudi consulate where Khashoggi, a US resident and Washington Post columnist who was a strong critic of Crown Prince Mohammed bin Salman, vanished.

They have also searched the consul’s residence.

Many samples were taken from the consulate and the residence, the official said, including soil and water. All of the samples will be taken to analyse for traces of Khashoggi’s DNA.

Khashoggi went to the consulate seeking documents for his planned marriage and has not been seen since. 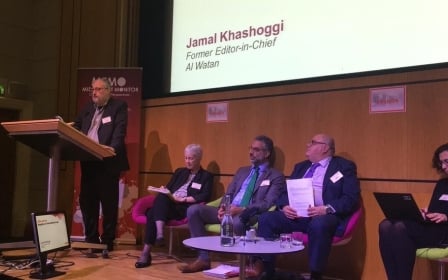