I shook Jamal Khashoggi's hand. Days later he was murdered 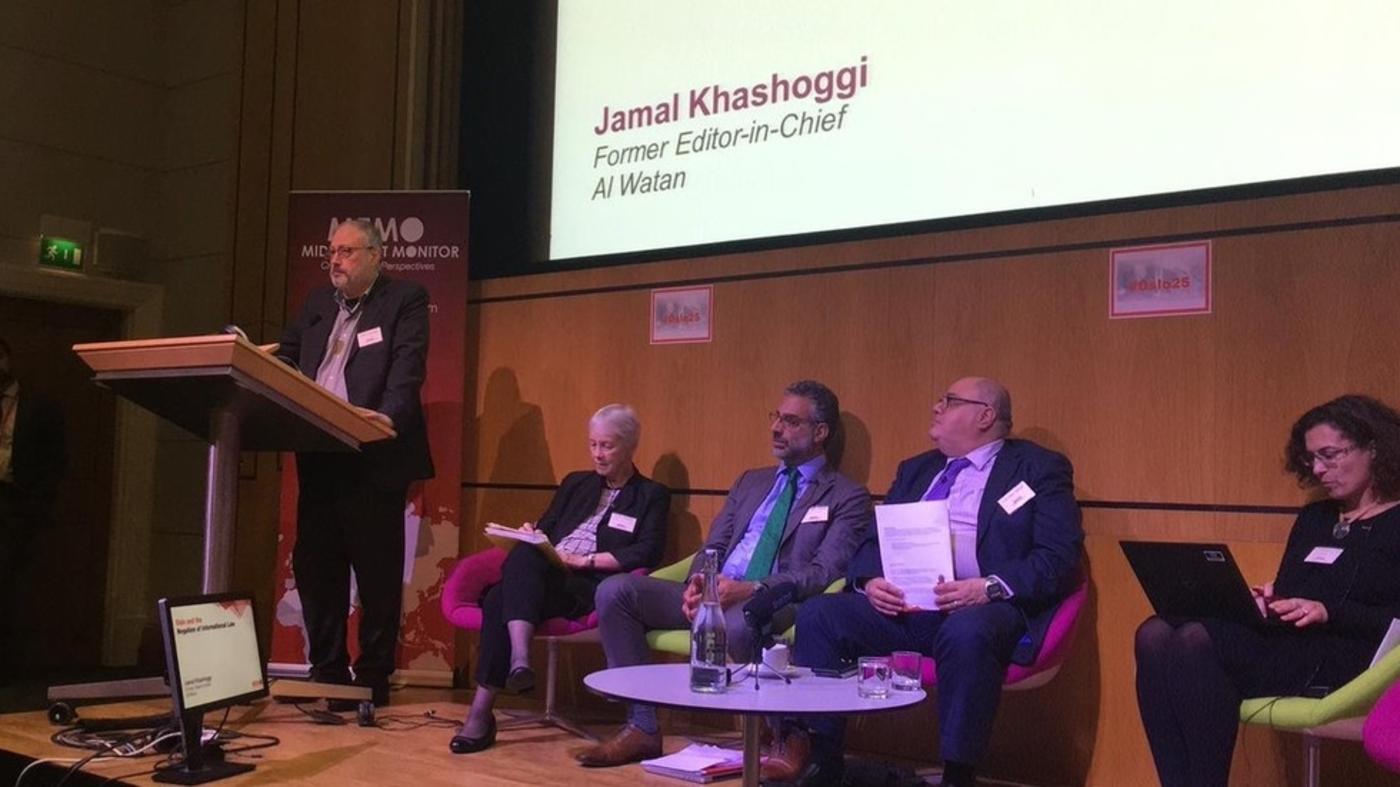 Last night, as I was watching the unfolding news coverage of the grisly assassination of Saudi journalist Jamal Khashoggi, I looked at my right hand and turned to my wife and said: "With this hand I shook Jamal's hand after dinner on 29 September and said goodbye."

The image that immediately came into my head was of Khashoggi's hand which - according to the grim details emerging about his murder - had been cut from his body. The reports about how Khashoggi’s body was cut up while he was still alive filled me with absolute horror.

How on earth could this have happened?

The only and last encounter

I had never met Khashoggi prior to my one and only encounter in London last month. But I had seen him frequently on news and debate programmes discussing Middle East-related topics.

Not only did his deep knowledge and informative analysis enrich the discussion, but his criticism of Saudi Arabia was coupled with deep affection and a strong desire to see it follow a course that would enhance its standing in the world and ensure its continued development.

My meeting with Khashoggi came after I was asked to chair a session at the Middle East Monitor’s conference entitled: "The Oslo Accords: A legacy of broken promises." A couple of days before the conference, I was informed of an additional contributor to the session that pleased me. It was Jamal Khashoggi.

I have been haunted by one image, that of his calm, confident walk into the Saudi consulate in Istanbul to receive a document confirming his divorce, not knowing he was walking into a death trap

On the morning of the conference, I was introduced to Khashoggi. Speaking in Arabic, I said how pleased I was that he was joining us and I mentioned that I was born in the Saudi capital, Riyadh, and asked where he was born. With pride, he said Al-Madina Al-Munawara, which is where the second-most important mosque to Muslims stands over Prophet Muhammad’s grave.

I asked Khashoggi how he wanted to be introduced and he said simply as a "Saudi journalist". His contribution to the discussion was succinct and he concluded that nobody but the Palestinians could accept or reject any deal put forward by US President Donald Trump and his advisers.

The session was well received, as some members of the audience told me afterwards.

Throughout the period since the shocking news of Khashoggi's disappearance, I have been haunted by one image, that of his calm, confident walk into the Saudi consulate in Istanbul to receive a document confirming his divorce, not knowing he was walking into a death trap.

I have been asking myself how the Saudi Arabia I knew as a child had changed so much in recent years from the one I remember fondly, to the one that has just authorised a gruesome killing of a citizen that it should have had tremendous pride in, a thinker, writer and patriot.

Why was Khashoggi's intellect not used by the "reforming crown prince" to inform him about his Vision 2030 for which he has received such admiration from the West? The same could of course apply to the many scholars, academics, intellectuals and activists who have been detained or indeed "disappeared" in the last couple of years.

Another image that sticks in my mind from my childhood in Riyadh was when Saudi TV announced that King Faisal had been assassinated by one of his nephews in 1975. Days earlier, while waiting for my father to pick me up from school, I saw Faisal's modest motorcade as it drove past my school, Ma'had Alasima Alnamuthajiya. He was waving to us - perhaps his last goodbye.

If a change at the top is to come, then I pray that it will bring a Saudi leadership that will look back at its best achievements and bring back the Saudi Arabia I knew and cherished

The fact that King Faisal had gone filled me with fear and insecurity. However, the transition from Faisal to Khaled was smooth. Those were the days when the kingdom did not interfere in other countries' affairs, when it stood for the Arab and Muslim world. Who can forget King Faisal’s oil embargo in 1973 targeting the US, among other countries that stood with Israel in the October war?

Yes, of course, Saudi Arabia was not perfect, but it was stable, with a consistent set of economic and foreign policies. Successive kings were revered by Saudis and respected regionally and internationally.

The spectre of a prime minister of another country being ordered to Riyadh to announce his resignation, as happened to the Lebanese Prime Minister Saad Hariri, would never have happened then. Could an Israeli prime minister have boasted about growing relationships with the kingdom at the expense of the Palestinians? Could the recognition by the US of Jerusalem as Israel’s capital have passed so easily? Could Yasser Arafat have been called to Riyadh to be told to accept whatever deal the Americans would offer?

Could an American president have humiliated a Saudi crown prince in his Oval Office as he counted the billions he had extracted from the kingdom for military hardware, as Trump did with Mohammed bin Salman? Would an American president have felt able to pronounce that the king of Saudi Arabia could not survive for two weeks without American protection, which he must pay for? Could a war on Yemen have been launched that would create such a catastrophic humanitarian crisis?

Could a Saudi journalist have been lured into a Saudi consulate to be murdered by a 15-man death squad?

The answer to all of these questions - in my opinion - is a resounding no. The Saudi Arabia I knew and grew up in would not have carried out any of these heinous crimes.

I firmly believe that it is not too late for Saudi Arabia to rediscover its soul, its principles and its values. An overwhelmingly young and now highly educated people can help it make its way in the world as a power for good, as a kingdom that will once again champion issues close to the hearts of the people of the Arab world, including Palestine.

If a change at the top is to come, then I pray that it will bring a Saudi leadership that will look back at its best achievements and bring back the Saudi Arabia I knew and cherished.

Kamel Hawwash is a British-Palestinian engineering professor based at the University of Birmingham and a longstanding campaigner for justice, especially for the Palestinian people. He is a regular columnist and appears regularly in the media as a commentator on Middle East issues. He runs a blog at www.kamelhawwash.com and tweets at @kamelhawwash. He writes here in a personal capacity.