Turkey-Syria meeting: No deals made at the first high-level talks in 11 years

Reports that the Turkish delegation agreed to pull out its forces from northern Syria are wide of the mark, sources say, but progress could be made in some areas 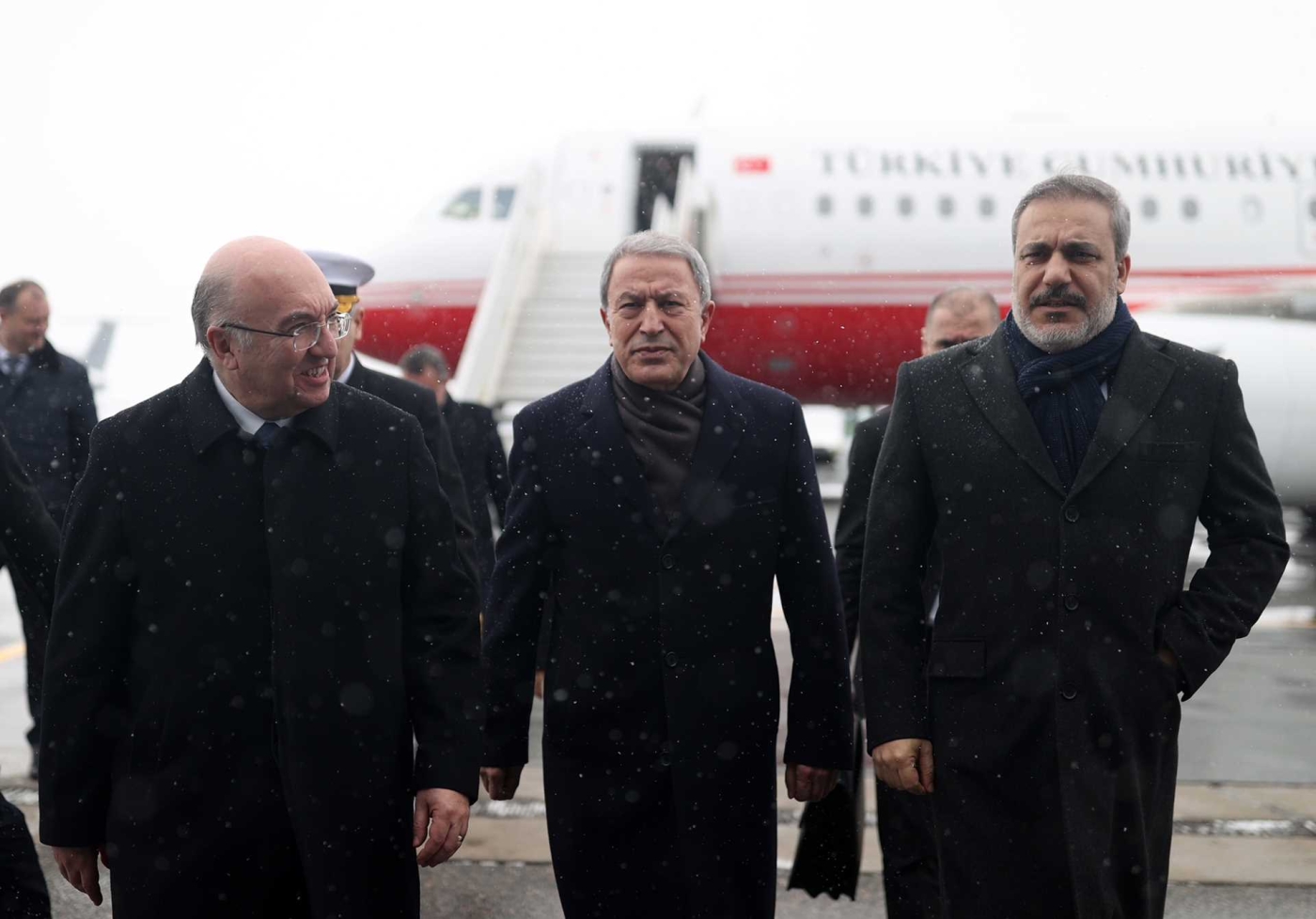 The first high-level meeting between Turkish and Syrian officials in Moscow last week was cordial but no deals have been made, multiple sources told Middle East Eye.

The Turkish and Syrian defence ministers, along with their Russian counterpart Sergei Shoigu, met on Thursday, elevating contacts that had previously been held on a strictly intelligence level. Ministerial contacts between Syria and Turkey had not been held in 11 years.

Turkey's defence ministry said the parties discussed the Syrian crisis, the refugee problem and the fight against "all terror groups" operating on Syrian soil.

Turkish Defence Minister Hulusi Akar said he told his Syrian counterpart Ali Mahmoud Abbas and Shoigu that Turkey respects the territorial integrity of all its neighbours and only aims to fight the terror groups to protect its borders.

“We strive to put a stop to refugee arrivals,” he said. “We told them that the Syrian crisis must be resolved within the framework of UN Security Council Resolution 2254,” he added, referring to a 2015 roadmap for peace in Syria.

The Turkish and Syrian governments have been foes since 2011, when Turkey became a supporter of the revolutionary movement against President Bashar al-Assad. Over the decade since, Turkey has backed some Syrian rebel groups and intervened in northern Syria, where it continues to deploy troops.

With Turkey due to hold presidential elections in June, many observers have speculated that Ankara is aiming to repair its relationship with Damascus to show the voters that it can return some of the nearly four million Syrian refugees living in the country.

In 2020, the Turkish opposition vowed that it would strike a deal with Assad to facilitate a voluntary return of the refugees. Anti-refugee feelings are rampant in Turkey, especially after a series of economic shocks that has left the country with a 90 percent inflation rate.

'The dialogue will take time. But they can initially take confidence-building measures, such as opening the M4 highway, which would be an economic boon for everyone'

Since the summer, Ankara has been conducting talks through intelligence channels, but no real progress has been made. However, the calibre of the outreach has been growing under Russian pressure.

Turkish President Recep Tayyip Erdogan, who once called Assad a “terrorist”, “a murderer” and “a dictator”, told reporters last year that he is open to meeting him.

One Turkish source with knowledge of the negotiations in Moscow told MEE that Turkey had already rejected one of Damascus's core demands: designating all Syrian rebel groups as terrorists.

The source said the Syrian government also wanted to declare the Turkish-controlled areas as “terror zones”, which was also rejected by the Turkish delegation.

The source added that the Syrians didn't appear willing to work against Syrian Kurdish affiliates of the Kurdistan Workers’ Party (PKK), an armed group that has been waging a decades-long war against the Turkish state.

Turkey has been calling on Damascus to create a 30km-deep zone along the Turkish border that would be free of groups that Ankara accuses of being part of the PKK or affiliated with it, such as the People's Protection Units militia (YPG) and its political arm, the PYD. Ankara also wants Syria to help manage the return of at least one million Syrian refugees.

However, Damascus has shown little appetite to comply, and instead asked Turkey to immediately withdraw from Syrian territory as a precondition for talks beginning. That precondition was lifted after Russia, Assad's key ally, placed heavy pressure on Damascus to engage with Ankara, sources told MEE.

On Friday, Syrian newspaper al-Watan, which is known to be close to the government, reported that Turkey agreed to withdraw its troops from northern Syria in the Moscow meeting.

A second Turkish source denied the report, describing it as propaganda and accusing the newspaper of taking Foreign Minister Mevlut Cavusoglu’s recent remarks out of context.

Cavusoglu said last week that Turkey would hand over the areas of northern Syria it controls once there is no terror threat from the country and there is political stability and peace. 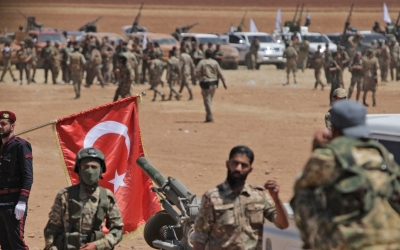 “We never said that we would annex the Syrian territories,” the source said. “We always said we would withdraw once a political solution has been reached there.”

Orhan said Ankara calculates that with Russia bogged down in Ukraine and Iran engulfed with its months-long protests, it is the best time to reach out to Damascus to push them towards a deal.

“Ankara is both taking steps to ease tensions but also showing the stick,” Orhan said. “Many members of the Syrian regime forces died during Turkey’s latest strikes against the PKK affiliates in Syria.”

Orhan added that both sides would struggle to make a deal on the key issues of refugees, territorial control, a new Syrian constitution and the opposition’s future.

“The dialogue will take time. But they can initially take confidence-building measures, such as opening the M4 highway, which would be an economic boon for everyone involved,” he said. “Or opening the trade links between the Turkish-controlled areas and regime-controlled areas.”

A scheme to open the M4 highway, which runs from the Syrian government bastion of Latakia in the northwest to the Iraqi border in the northeast via Idlib and Aleppo, was discussed in Moscow, according to al-Watan. 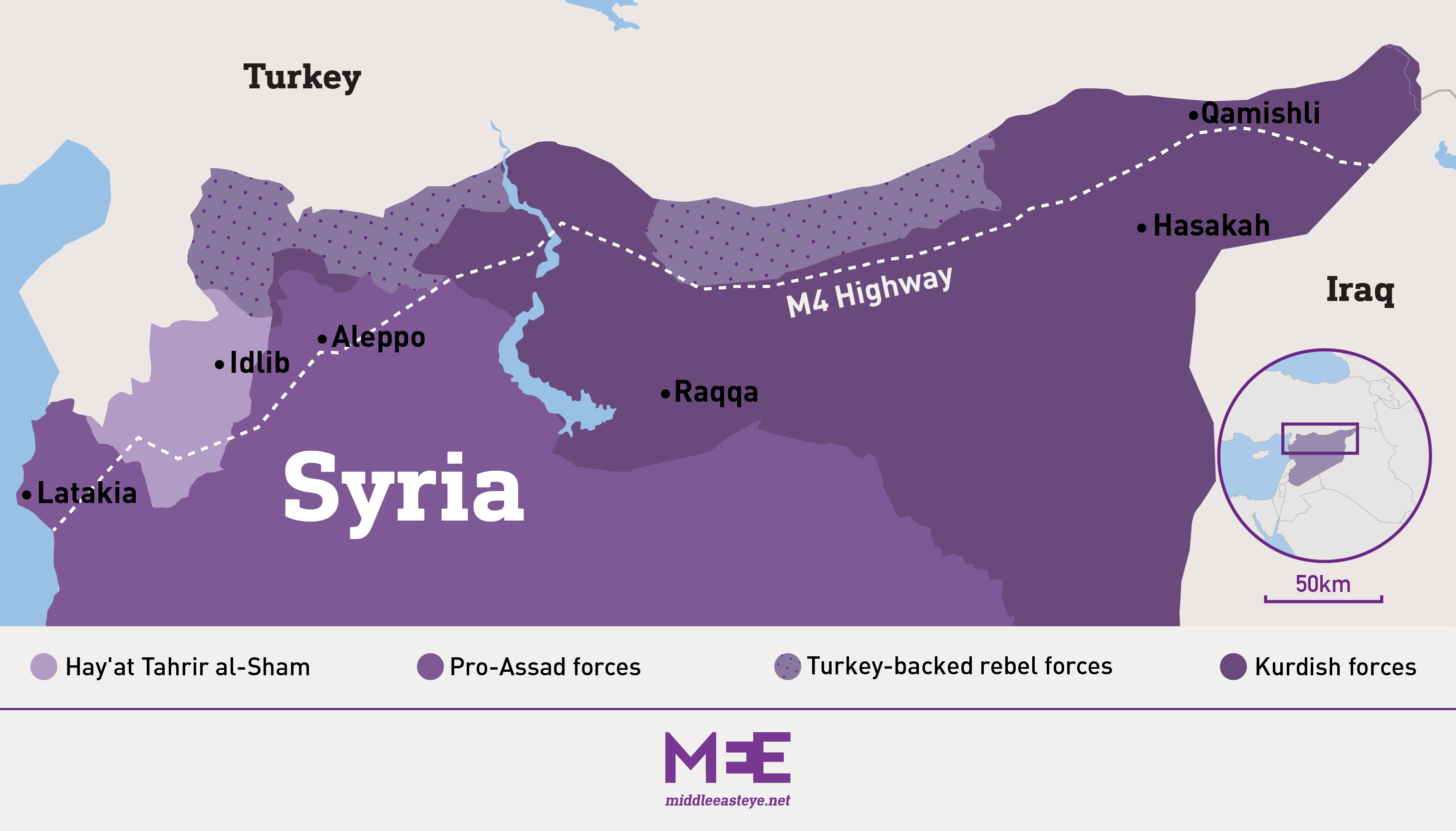 Cavusoglu said over the weekend that he plans to formally meet his Syrian counterpart later in January.

Orhan said the Syrian government might believe that Turkey started the reconciliation process for electoral purposes, and therefore could be reluctant to give Erdogan the potential electoral asset of a photoshoot with Assad.

But while outreach to Damascus may appeal to some sections of the Turkish public weary of the war next door and its impacts, the Syrian government remains a pariah in the international community. Turkey's overtures have already provoked a US condemnation.

“Turkey is making clear that we are open to cutting a deal,” the second source said. “We don’t expect any major issue to be resolved quickly." 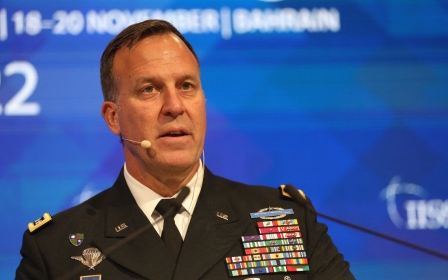 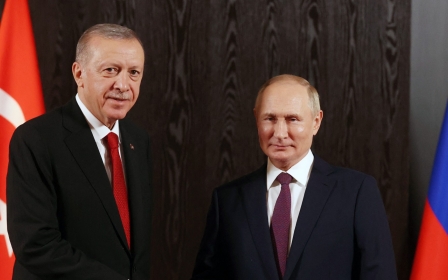 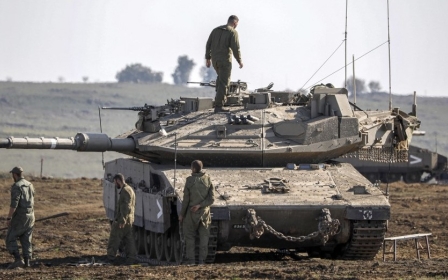