ISTANBUL, Turkey – The fact that markets did not go into meltdown and the currency did not nosedive after a coup attempt and subsequent crackdown has widely been hailed as a testament to the solidity of the country's economic foundations.

But recent moves by the government, making it easier for households to purchase on credit - including the option of grocery shopping in instalments - and making conditions for personal credit loans easier, have raised concerns about the direction of the country’s economic growth.

Figures showing unemployment entering double digits at 10.2 percent also raised questions about the health of the economy. According to economist Mustafa Sonmez, unemployment in urban areas is as high as 13 percent and youth unemployment stands at 20.5 percent.

However, they also warned that continuing the policies could pose longer-term risks to the strong economic foundations that exist, particularly in the financial and banking sectors.

“This will boost business volume for banks, but it also substantially increases the risk of bad loans for them,” he said. “A large increase in such bad loans could pose longer-term problems.”

Turkish authorities have said Fethullah Gulen, a US-based Turkish preacher, and his followers in the Hizmet (service) movement, were behind the botched 15 July coup attempt.

The crackdown that was launched after the coup has seen more than 80,000 people from both the public and private sector, including businesspeople, academics and others arrested, dismissed or suspended from their jobs.

Including dependents, hundreds of thousands of people have been affected by the crackdown.

Although public employees who are suspended continue to receive two-thirds of their wages, those who have been sacked in the private sector or had their assets confiscated face a bleak future.

Erhan Aslanoglu, a professor of economics at Istanbul’s Piri Reis University, told MEE that it would be natural for the coup attempt to impact domestic consumer confidence and economic growth, but thus far there has been no visible drop in consumer confidence.

“Turkish households seem to hold on to the appetite to spend. We had a slowdown in the economy in the second quarter and then the coup attempt after that might also have an impact, but indices tell us consumer confidence is on the rise,” said Aslanoglu.

Aslanoglu was keen to stress that the government’s move to ease personal credit conditions was not a response to a potential stagnation of the economy, but a move to maintain expected growth rates, which have been elusive thus far.

“The attempt to increase domestic demand is meant to push economic growth higher than the current 3 percent. The expectations are for higher growth. There is no risk of stagnation,” he said.

Sonmez, however, says such risky moves to increase domestic spending, as a result of slowing export and domestic consumption, remain the main driver of economic growth.

“Foreign and domestic investments are really low because both have doubts about Turkey’s future stability. Exports are dwindling. Domestic spending remains the only option to maintain or increase economic growth,” said Sonmez. “But what you need to consider is that domestic spending does nothing to create jobs and this is reflected in the unemployment figures.”

The post-coup crackdown has also targeted businesses suspected of having links with the Gulen movement. This has included well-known furniture manufacturers, businesses involved in gold mining and even baklava makers.

Many of these businesses are also known as the Anatolian Tigers, which played a major role in Turkey's economic growth over the past decade. The majority of these tigers are comprised of religiously conservative small and medium-sized businesses in Anatolia, away from the traditional manufacturing centres in western Turkey.

Many of these businesses are now implicated with links to Gulen.

Sonmez is wary of attributing too much significance to the Anatolian Tigers and their supposed impact on the economy.

“The Anatolian Tigers was a made-up and exaggerated construct to facilitate easier loans and credit for small and medium-sized businesses. I don’t think their activities or lack of activities have any major impact on economic performance and indicators,” he said.

The main concern, said Sonmez, would be a cut in the flow of foreign money into the economy. He said there is nothing - even moves to promote domestic spending - to indicate an impending crisis, but that the Turkish economy is not as resilient as it is made out to be.

The real crisis would be if this inflow of money to emerging markets, including Turkey, dries up and the country has no control over that, he said.

“The inflow of money is what keeps the Turkish economy on its feet. That inflow depends on US interest rates and the global economic conditions,” said Sonmez. “If those capital inflows stop then we will have a real problem.”

Aslanoglu, on the other hand, said the Turkish economy has proven resilient to various shocks, including attacks and loss of markets amid various problems such as the recent diplomatic crisis with Russia. He also said there is little to suggest that the Turkish economy cannot remain resilient.

“All the indicators point to the economy remaining resilient. I don’t see why it shouldn’t be able to cope with any post-coup effects. Turkey has good demographics and flexibility to withstand shocks and continue to grow.” 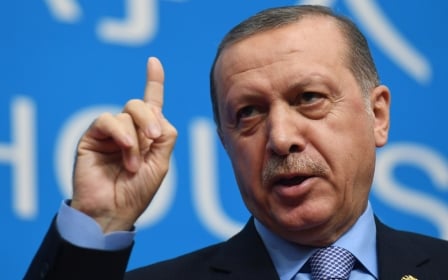 Turkey At War
Turkey has 'binding duty' to defeat IS: Erdogan