Turkey's gun culture: Sales soar as one in three households owns a firearm

Eighty percent of violent crime involves guns, NGO says, as it reports gun ownership has soared from 20 million to 25 million in one year 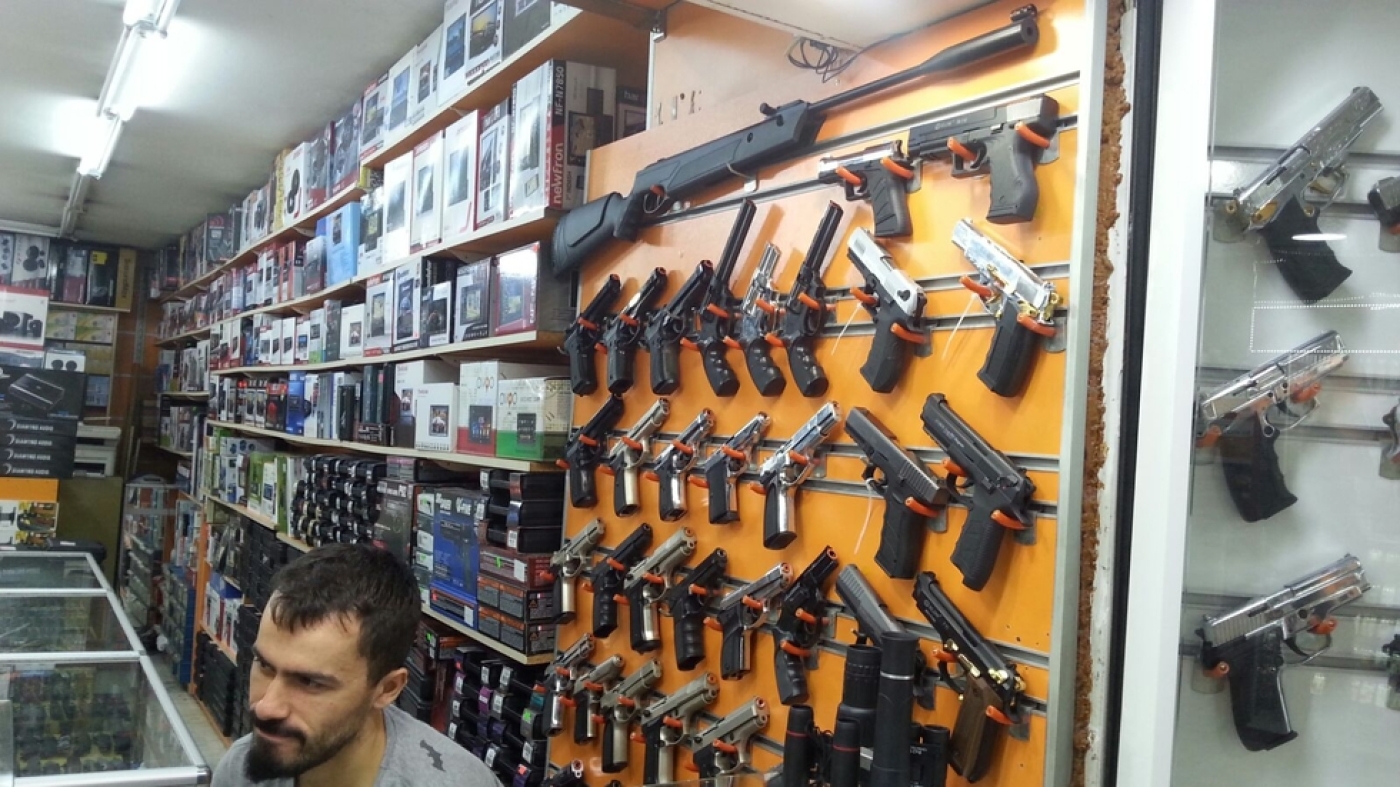 ISTANBUL, Turkey – A stroll through a bustling underpass in the centre of Istanbul offers the chance to buy a range of everyday goods: cheap watches, kettles, $2 emergency umbrellas to ward off autumn showers. And replica AK-47 assault rifles.

While the rifles, and dozens of handguns displayed nearby, are imitations, they nevertheless stand out from the surrounding Karakoy stalls. And their prominent placement is perhaps a window into a deeply entrenched gun culture in Turkey that now kills more than 1,500 people a year.

This year alone at least 1,575 deaths have been reported in Turkey as a consequence of more than 20,000 incidents involving guns. And according to the latest report, there are an estimated 25 million privately owned firearms in Turkey in 2017, an increase of five million in a year.

It works out to one in every three households having a firearm of some sort. Out of these, 85 percent are said to be unregistered and unlicensed weapons. 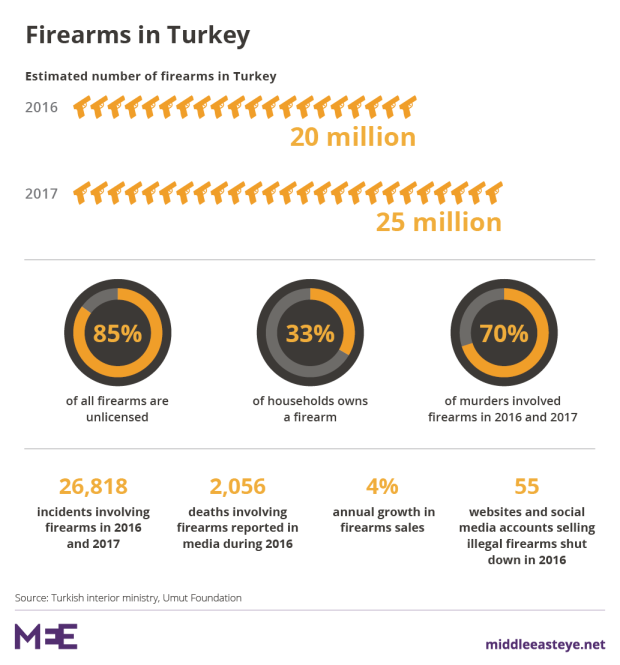 In its annual report, the Turkish NGO the Umut Foundation said 2,225 incidents involving firearms were reported in the media from 1 January to 22 September and that they had resulted in 1,575 deaths.

Firearms incidents accounted for 79.76 percent of violent crimes reported during this period.

However, Istanbul in particular - and Turkey in general - remains one of the safest places for visitors and travellers with very few instances of armed robbery targeting individuals.

The Turkish interior ministry on 8 November contested the numbers provided in the Umut report, saying figures were not based on any scientific or statistical data and therefore needed verification.

The foundation did not respond to Middle East Eye’s request for a response to the ministry’s statement.

It said there were 23,498 gun-related incidents, including threats to use weapons, in the first 10 months of this year. The statement said 10,790 firearms were seized during these incidents and 12.9 percent of those were registered firearms while 87.1 percent (9,390 firearms) were unregistered.

The Umut Foundation cites the main causes of the problem as ease of access to firearms and the lack of any deterrent punishment for offenders using unregistered weapons.

It said courts often commuted prison terms for such offences to cash penalties, and paltry sums at that.

The interior ministry in its statement said that cash penalties for possessing unregistered firearms had been increased. It also said 55 illegal vendors selling firearms online and via social media sites had been tracked and shut.

It also stated Turkey did not have an acute gun problem. Legal private gun ownership in Turkey was about three percent of the population whereas it was eight percent in Norway, 6.5 percent in Sweden and 4.5 percent in Spain. It didn’t provide any numbers on unregistered illegal gun ownership.

Ahmet, an employee at a gun store in Istanbul that also conducts online sales, told MEE that business was brisk.

“Sales are good. We sell air guns, shotguns and other rifles. The air guns don’t require permits because they use pellets and are harmless. Customers need to show the proper paperwork to buy the other guns,” he said.

But he said permits were easy to obtain.

A health report from a state hospital, a court document showing they have no previous criminal convictions and the registering of the weapon with the police along with the annual permit fee are the main requirements to obtain a firearm permit.

The annual firearm permit fee is about 10,000 lira (about $2,600) and is sometimes the reason why buyers resort to buying illegal firearms.

Hasan, who works at one of the gun shops in Karakoy, told MEE they only sold guns that didn’t require permits.

“We only sell air guns and guns with their barrels blocked. They don’t require permits and are also cheaper. My customers are mostly men looking to use it for celebratory gunfire during weddings and other ceremonies,” he said.

Ahmet said the majority of their customers were men between 18 and 40.

“We rarely have women customers. The men always say they are buying the weapons for safety and protection whether they are air guns or proper guns,” said Ahmet.

Mehmet, an alias, lives near the outskirts of the capital Ankara and is in his 50s. He owns a firearm and told MEE it was to protect his family.

“I will not hesitate to use my gun if someone threatens my family’s safety or honour. Should I sit around waiting for the police while my family is threatened? What would you do?” he said.

He refused to divulge whether he had a legal permit to carry a firearm, and said it was perfectly legal since he had “bought it from a former military guy”. He also said he had no problems finding live cartridges for his firearm.

Mehmet said he sometimes went out of the city with his children to fire a few rounds and relieve stress.

Despite saying he only owned a gun to protect his family, Mehmet said he always carried his weapon tucked into the waistband of his trousers at the back “just in case”.