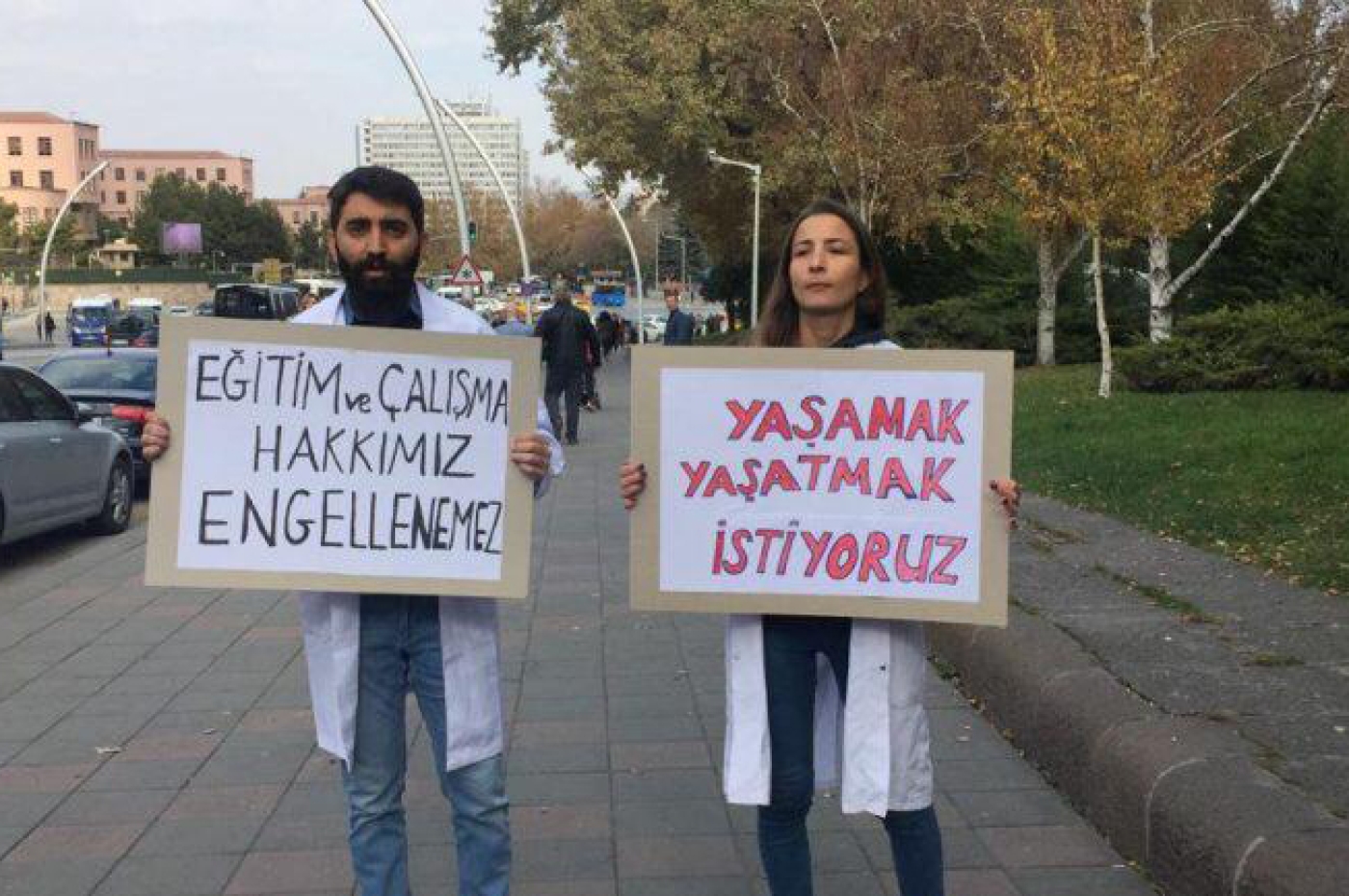 Mihriban Yildirim [R] holds a banner outside parliament saying: “We want to live, we want to help others to live"; and "Our right to work and education must not be prevented" (MEE)
By
Ayse Karabat

ISTANBUL, Turkey - Stringent new security and background checks for newly qualified doctors in Turkey, including an assessment of their moral character and their political views, could prevent thousands of medical school graduates from working in public hospitals.

A new law passed by Turkey’s parliament on Wednesday means that doctors will be subjected to the wide-ranging checks, based in part on police and intelligence records, before they are permitted to undertake a compulsory period of “national service” in the public healthcare system in order to gain their medical diplomas.

The law also bans doctors who lost their jobs in the aftermath of a failed coup in 2016 from returning to work in public hospitals.

An estimated 3,315 doctors were among about 125,000 people who were dismissed from public institutions, the armed forces and the police, and accused of being linked to organisations threatening national security.

The majority of those who have lost their jobs since 2016 have been accused of having links to Fethullah Gulen, the US-based exiled cleric who is accused by the Turkish government of masterminding the coup against President Recep Tayyip Erdogan.

Some doctors told Middle East Eye their careers had already been affected by emergency measures and background checks introduced since 2016.

“I waited and waited. Every day my hopes diminished. But seven months later I got a piece of paper stating I could not be assigned as a doctor. I learned that it all comes down to security clearance,” FD, a 26-year-old newly qualified doctor, who did not want to be named because of concerns about his future, told MEE.

“But I am even not a member of any association. The only time I encountered the security forces was when I got my driving licence [from the police],” said FD. “And now my right to work has been taken away from me.”

The reason that FD has been unable to start work is a law introduced in October 2016, known as Executive Decree No. 676, which stipulates that applicants for public sector jobs must undergo “a security investigation and an archive search” before being appointed.

Under Turkish law, the definition of “archive search” includes every single record held by the security and intelligence service, ranging from traffic fines to periods in detention, even if they did not lead to a court case or arrest.

But a new amendment, introduced late last month, extends the scope of security investigations even further to include a candidate’s moral attitude, their relationships with foreigners, their ability to keep secrets, and an assessment of whether they have ever been involved in “destructive and separatist” actions.

In addition, actions contradicting Turkey’s founder Mustafa Kemal Ataturk’s “revolutions” and principles are subject to security investigations. Also under scrutiny are a candidate’s passion for money, self-interest and alcohol use, to the extent that these might prevent them performing their duty.

According to the same bylaw, having a link to or being a member of any structure, organisation or group that the State Security Council defines as being against the state’s national security - or propagandising for or on behalf of such structures - would also lead to security clearance being withheld for those wishing to serve in the civil sphere.

According to the Turkish Medical Association (TTB), about 400 doctors have already been restricted from working, and about 1,200 graduates are still awaiting security clearance that would allow them to work. The TTB says that thousands more could be affected by the new law.

Graduates from medical school in Turkey are obliged to serve in the public sector for up to 600 days in order to gain their diplomas. Shorter terms are available for those serving in deprived areas.

Under the new law passed on Wednesday, medical graduates who fail to receive security clearance will be required to wait 450 days before being permitted to enter employment.

Only after this period can they practice medicine, and even then only in private health institutions. Doctors dismissed in the aftermath of the coup will also be restricted to working in private hospitals.

Ataman said that lawyers appealing to the courts on behalf of doctors unable to gain permission to work had initially been able to establish that some of them had been blacklisted because they had relatives who were accused of being linked to political groups or participating in demonstrations.

“The police force carries out security investigations in Turkey. Initially, the police answered the courts’ questions", Ataman said. "From these answers, we saw that they were not being assigned on grounds of [for example] having a sibling under investigation for the possibility of being a FETO [Gulen’s organisation, which Turkey considers a terrorist group] member, or having a father who is a member of EMEP [Turkey’s left-wing Labour party], or participating in a legal demonstration."

Ataman went on to say that "after these answers in the initial court cases, they started to say that these security investigations were secret and that we could not see them.”

According to the lawyer, the early answers suggest that the state has files on its citizens and has “labelled” them on the basis of the intelligence gathered.

Omer Faruk Gergerlioglu, a deputy of the People’s Democratic Party (HDP) and a doctor dismissed under an emergency decree, read police reports to the parliamentary health commission during discussions of the draft bill. He claimed that the reports had been sent to the Ministry of Health by the police in relation to doctors awaiting security clearance.

According to the examples Gergerlioglu read to the commission on 6 November, one set of documents states that there is no information about the relevant person’s involvement with any organisation, but that he has a brother who attended a Gulen school; another says the same for the would-be doctor, but underlines that he has a mother who worked as a cook in a Gulen-affiliated kindergarten; another had a father who was a member of the pro-Kurdish HDP.

FD told MEE that the only reason he can think of for being denied his security clearance was his participation in student demonstrations at university.

Media reports subsequently revealed that the university that he attended was keeping secret files on students and academics, while senior figures in the university administration at that time are currently on trial, accused of being linked to Gulen.

“They are facing charges now, but we are punished because of the labelling files that they kept,” said FD.

'The state will defend itself'

MEE spoke to several other doctors, including two professors, who underlined that before the coup attempt the Gulen movement had extensive influence, especially in medical faculties.

“They did great harm to the medical academy. To establish their own cadres, they stole exam questions, pushed away many gifted people with many methods – including bullying. They made fictitious publications and eradicated the respect for Turkish medical circles in the world. They used the budgets of medical faculties for their organisations,” a professor who wished to remain anonymous told MEE.

They added, though, that "all these criminal elements should be investigated individually instead of taking away their rights, and this new draft is definitely not just."

During the discussions of the draft bill by the parliamentary commission, the ruling Justice and Development Party (AKP) deputy and former Health Minister Ahmet Demircan spoke in favour of the draft: “Of course the state will defend itself, this is the self-defence of the nation.”

Mihriban Yildirim told MEE she was dismissed by decree on 1 September 2016, during her first year specialising in psychiatry at Karadeniz University in Trabzon. Since then she has been unemployed.

“When this new law came on the agenda, we, young doctors in particular, decided to fight for our rights. When the parliamentary commission was discussing the draft bill, we organised a demonstration in front of parliament. For the first time in my life I was detained for about an hour and a half,” she said.

Yildirim said that opposition to the bill had resulted in some concessions from the government. Proposals which would have placed further restrictions on doctors working in the private sector, and which would have stopped them from working for 600 days rather than 450, were dropped from the legislation passed by parliament.

But she said the new law would have career-changing consequences for many doctors who would no longer be able to train and pursue careers as specialists.

“Well, maybe the draft has been changed, but still I will not say that I have a right to work [if it is only] at private hospitals. I want my full rights, including the right to resume my education. I want to be a psychiatrist. Due to this new regulation, I can only work at private hospitals on night shifts as a general practitioner – of course, if I can find a job at all,” Yildirim said.

Selcuk Celik is a graduate of Pamukkale University’s Faculty of Medicine. He failed to get security clearance and says that even if there are no restrictions on working for private hospitals, they will hesitate to hire doctors like him or those who were dismissed by decree.

“We are stigmatised. It is impossible to hide our situation when we apply for a job. They will think that we are inexperienced since we did not complete our compulsory service and besides, they will hesitate to work with a stigmatised doctor, in the fear that the same thing can happen to them, too,” he said.

He sees himself as a typical example of those unjustly affected by the state vetting.

The young medic told MEE that at the beginning of the emergency rule, the Ministry of Health gave papers to doctors who failed security clearance. These papers stated that the holder was exempted from compulsory medical service. He was able to get one and started to look for a job.

“I looked for a job for months. Maybe I applied to more than 20 private hospitals in four different cities. Finally I got one, but when the hospital’s administration changed, they fired me. Later I found another job, but the conditions that they suggested were far from favourable,” Celik said.

He added that he describes himself as a socialist, that he had participated in some demonstrations, and that he was brought to trial but acquitted.

“The courts should decide if you committed a crime, not an intelligence report,” he said.

Zehra Dogramaci is another doctor left jobless for nine months in the wake of her dismissal.

She said that after practicing medicine for 17 years, she and her husband have been dismissed from their positions on grounds of ties to the Gulen organisation. She was detained for 15 days, while her husband has been in prison for a year.

“I learned of the [attempted] coup while I was sitting at home. Whoever did it should be punished as harshly as possible, but I have no organic relation with this organisation.

“My family and I were sentenced to starvation during this time,” she told MEE.

Dogramaci said she faced many challenges in life. She has had breast cancer, and also has a child with Down’s Syndrome.

“But nothing hurt more than being stigmatised,” she said.