Turkish opposition calls for Syrian Kurds to break with PKK Turkey's main opposition party has called on the Syrian Kurds to disaffiliate themselves from the outlawed Kurdistan Workers' Party (PKK) so that Turkey could begin a process of opening relations.

Ozturk Yilmaz, deputy chair of the Republican People's Party (CHP), said that were the Democratic Union Party (PYD) to break with the PKK, who are involved in a long-running war with the Turkish state, then it would make relations between Ankara and the US easier with regards to a joint operation to tackle the Islamic State group in northern Syria.

"US officials are trying to give the impression that the cooperation with the PYD is just tactical and temporary. They are trying not to alienate Turkey," he told reporters in Washington over the weekend.

"We say this: If the PYD says 'I condemn the PKK and do not support its activities, I have no ties to the PKK,' this could prove a way forward."

He said relations could be established along similar lines with the Iraqi Kurdistan Regional Government (KRG) which has become a close ally of Turkey in the region despite holding Kurdish nationalist aspirations.

"We opened a separate channel with the KRG in Iraq because it condemned the PKK," explained Yilmaz.

"Why should not there be the same thing in Syria? If the Syrian people want to have an autonomous structure, it could facilitate that region’s relations with Turkey. But only on the condition that the PYD cuts its relations with the PKK."

The PKK formed in 1978, under a CHP-led coalition government, at a time when Kurdish rights were severely repressed, and since 1984 has been involved in a violent conflict with Turkey which has seen more than 40,000 deaths and human rights abuses on both sides.

In 2013, the Justice and Development Party (AKP) began a peace process with the PKK, but this collapsed in July 2015 as fears increased in Ankara about the increasing power of the PYD in northern Syria.

Turkey has long feared that the PYD, and its armed wing the People's Protection Units (YPG), are creating the beginnings of a pro-Kurdish statelet in northern Syria which could be used by the PKK as a base for launching attacks against Turkey.

The matter has become further complicated by the US decision to back the YPG, as part of the Kurdish-Arabic Syrian Democratic Forces (SDF) alliance, in the campaign to drive IS out of its "capital" in the city of Raqqa.

Turkish President Recep Tayyip Erdogan has been furious at the US since it announced it would be arming the SDF in the Raqqa campaign, undermining early warm relations with the new administration of Donald Trump.

"I hope that it [the US] will turn away from this wrong," Erdogan said last week, after announcing that Turkey would not be taking part in the Raqqa campaign due to the YPG's presence.

The SDF has advanced to within a few kilometres of Raqqa city at the nearest point, in an offensive that got underway in November to encircle and capture the city.

The group said earlier this month it expected to launch the final assault on Raqqa in early summer. YPG and SDF officials had previously given April start dates for the assault, but these have fluctuated.

The PYD has long claimed that it is a separate organisation to the PKK, but while local branches exert a form of autonomous control, the major decision-making process is thought to be dominated by PKK-trained cadres, many of whom fought in Turkey in the 1990s, who control the administrative budget, military cooperation with the US and appointment of frontline commanders.

The PYD is also part of the Kurdistan Communities Union (KCK), a transnational body which is co-chaired by Cemil Bayik, currently also the most senior commander in the PKK.

However, there is thought to be a difference of opinion within the PYD ranks as to the organisation's future goals in northern Syria, following the defeat of IS - whether to continue to press the military campaign against Turkey or to focus on building a "democratic confederalist" structure in northern Syria, based on the principles of the jailed Kurdish leader Abdullah Ocalan.

"Having failed to obtain local or external support for its self-rule project, it finds itself besieged, without allies it can rely upon to protect it and dangerously exposed," wrote the International Crisis Group.

"As a result, the PKK has come to a crossroads: it must choose between continuing to hitch the Syrian self-rule project it so successfully established to the wagon of its ongoing fight against Turkey or giving it the chance to develop and thrive with its own Syria-driven logic." 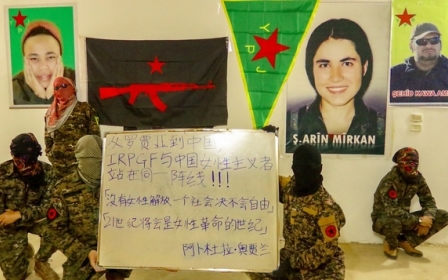