Two children hold a banner that reads "we will absolutely go back to Palestine," as Turkish demonstrators wave Palestinian flags (AFP)
By
Suraj Sharma

ISTANBUL, Turkey – Many Muslim conservatives, who comprise the core support base of Turkey’s ruling party, are incensed as the strongest signs emerge to date of an imminent restoration of ties between Ankara and Tel Aviv.

A growing number of media articles and hints by officials suggest that the two countries are very close to restoring relations to pre-2010 levels. Many people, however, are enraged at reports about the manner in which negotiations seem to be proceeding and see it as an abandonment of the Palestinians.

The flotilla led by the Mavi Marmara ship was an attempt to bring urgently needed humanitarian supplies to the besieged people of Gaza and shine a spotlight on the Israeli-imposed blockade of Gaza.

Following the incident, Turkey set three conditions on Israel before it would consider fully restoring ties. Diplomatic representation between the two has not been at ambassadorial level since Turkey expelled the Israeli ambassador in September 2011.

The other two conditions included an Israeli apology and compensation to the families of the victims of the Mavi Marmara. The apology came in 2013 and a compensation deal has reportedly been agreed upon.

Observers have also pointed out that just easing the blockade and allowing aid access only through Israel is reverting to the situation as it was pre-2010 that led to the Mavi Marmara expedition in the first place.

“It looks like the government has given up on its principles and values. It will lose support as a result,” said Ismail Bilgen, whose father was one of those killed on the Mavi Marmara.

“The Justice and Development Party [AKP] enjoys great support due to its resolute principled stance on issues but this move is in total contradiction to that.”

“Restoring ties in this manner is unacceptable. The Israelis are acting like the compensation is an act of benevolence on their part rather than a punishment for their crimes,” said Bilgen.

“My father and his friends died trying to bring international attention to the inhumane blockade imposed on Gaza and to have it lifted. It now appears like their martyrdom will have been in vain.”

Cigdem Topcuoglu, whose husband was killed aboard the Mavi Marmara and who was on the vessel herself and held by the Israelis for a period, told MEE that she is against any restoration of ties with Israel regardless of the details.

“Our struggle will continue no matter what. I am against it completely,” she said.

In a separate statement she said: “In no way should an agreement be reached or friendship established with the Zionists calling themselves Israel, and who have blood on their hands.”

In the opinion of Ahmet Uysal, a professor of Middle Eastern studies at Marmara University, restoring ties with Israel is a strategic necessity and should be considered a positive development at any rate.

“Regional developments meant that Turkey found itself besieged on all fronts especially when the crisis with Russia is taken into account. Restoring ties with Israel became important to release some of the pressure on Turkey,” Uysal told MEE.

Better ties with Israel will also be of help to the Syrian people, who he believes suffered significantly due to a lack of Turkish-Israeli cooperation.

According to Uysal, the Israelis played a major role in encouraging increased Russian involvement in Syria to counter growing Iranian influence in the country

He said for Turkey to be able to directly discuss Syria with Israel will prove crucial in finding common ground to bring peace and stability to the region as a whole.

Swaying Turkish public opinion vis-a-vis the restoration of ties with Israel will not present any problems, said Uysal.

“Israel is there whether we like it or not and it is better to have a dialogue and bargain with it for a better future for everyone, he said. “Even though Israel is the cause of Palestinian suffering, any deal that can help reduce that suffering to any extent is a positive move.”

Media reports say part of the deal being agreed with Israel will allow Turkey to build, staff and equip a much-needed hospital in Gaza, build an offshore electricity generator, and send construction and other material to Gaza via the Israeli port of Ashdod.

The same reports state that both sides are expected to announce the agreement on 26 June and start implementing it in July.

The visit of an Israeli MP to Turkey on Friday 24 June - the first visit by an MP since the Mavi Marmara raid - to attend an academic conference on restoring relations, is being seen as a further sign that the nearly three-year-long negotiations to normalise ties between the two countries is close to success.

A meeting between Hamas leader Khaled Mashaal and Turkish President Recep Tayyip Erdogan in Istanbul on 24 June was also seen as a briefing on the current situation in Palestine in general and the Gaza strip in particular.

'Insult' to memory of victims

After nearly six years of demonising Israel and its actions, the AKP government is going to have a tough task on its hands convincing its supporters of the need to restore ties with Israel, regardless of the strategic significance of such a move.

“I can understand that states can’t be emotional and have reasons for establishing relations with other countries, but if ties with Israel are restored in the present form it is an insult to the memory of my father and the other Mavi Marmara martyrs,” said Bilgen.

Topcuoglu is still holding onto the hope that Erdogan will intervene and not permit the restoration of ties with the current conditions.

“Our president when he met with us told us the blood of the Mavi Marmara martyrs was sacred. I hope our president doesn’t concede to Israel in any way and doesn’t make a deal,” she said. 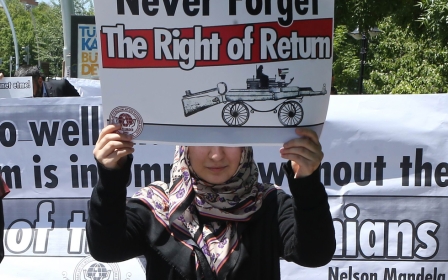