21-year-old, believed to be Syrian refugee, and 48-year-old were released in 'fast-moving investigation' British police on Thursday released two men arrested in connection with the bombing of a London Underground train last week, leaving four suspects in custody over the attack.

A 21-year-old, believed to be a Syrian refugee, was released with no further action following his arrest late Saturday in Hounslow, west London, the Metropolitan Police said in a statement.

Shortly afterwards, a 48-year-old man, one of three arrested earlier this week in Wales, was also released without charge.

The 21-year-old is believed to be Yahyah Farroukh, originally from Damascus, who was identified in British media last Monday, although police did not formally confirm that he was a suspect in the case.

Dean Haydon, the force's head of counter-terrorism, said the probe into the bomb attack at Parsons Green station "continues to be a fast-moving investigation" and searches are ongoing at four addresses.

Placed on a packed train during morning rush hour, the improvised device injured 30 people when it went off despite apparently malfunctioning.

The attack in Parsons Green caused panic among commuters and some were hurt in the stampede as people fled the scene.

Police made a first arrest a day later when they picked up an 18-year-old man at Dover, a port in the southeast which serves as a gateway to Europe.

The investigation subsequently shifted to Newport in Wales, where the 48-year-old released on Thursday was arrested, as well as two men aged 25 and 30 who remain in police custody.

The most recent arrest came in the early hours of Thursday, when a 17-year-old suspect was detained in Thornton Heath in south London.

The tube bombing was the fifth terror attack in Britain in sixth months - four of them in London and one in Manchester - with the bloodshed claiming 35 lives. 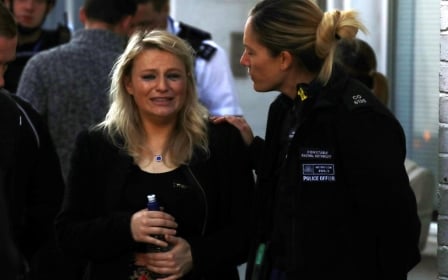