A prominent Muslim American activist resigned from a UAE-based forum "promoting peace" and accused the organisation of a "breach of trust" after it issued a statement with her name attached to it endorsing normalisation with Israel.

Aisha al-Adawiya, the founder of the human rights group Women in Islam, announced her resignation from the Forum for Promoting Peace in Muslim Societies (FPPMS) on Sunday, citing her "staunch" support for the Palestinian people.

Last week, FPPMS issued a now-deleted statement claiming normalisation "stopped Israel from extending its sovereignty over Palestinian lands" and was a means to "promote peace and stability across the world".

Adawiya said the topic of normalisation was never brought up at a recent board meeting and "there was no agreement on any kind of support for the UAE's deal with Israel".

'As a result of this breach of trust and consistent with my values, I'm announcing my resignation'

"As a result of this breach of trust and consistent with my values, I'm announcing my resignation," she said in a Facebook post.

On Friday, Abdullah al-Matouq, an adviser to Kuwait's royal court and a member of the forum, also issued a statement distancing himself from the FPPMS statement.

"I attended the aforementioned meeting as a member of the forum's board of trustees. No political initiatives regarding the Palestinian issue were discussed or mentioned on the agenda," he said.

Hamza Yusuf, vice-president at FPPMS, who has also come in for criticism for appearing as a signatory to the peace forum's statement, said he did "not engage in or endorse geopolitical strategies or treaties".

"My allegiance is and has always been with the oppressed peoples of Palestine, whether Muslim, Christian, or otherwise," Yusuf said in a statement on Facebook.

A media representative for Yusuf at Zaytuna College said Yusuf would not be taking questions from the media and referred to his statement on Facebook for clarification. 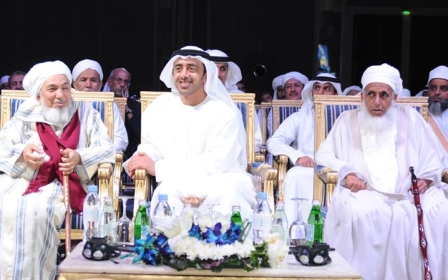