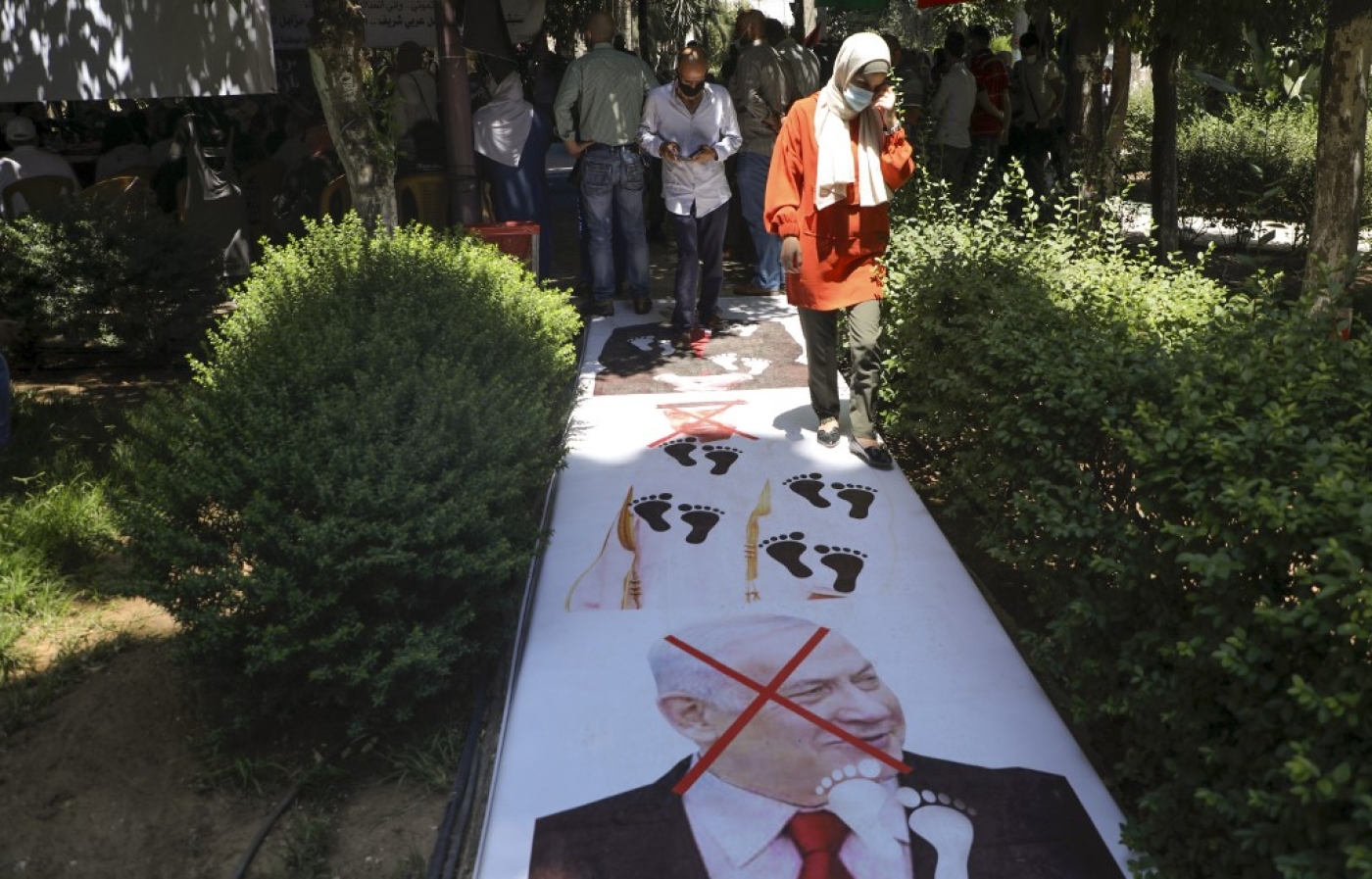 A Palestinian woman steps over portrait of Mohammed bin Zayed Al-Nahyan and Benjamin Netanyahu, during a protest against the Emirati-Israeli deal in the occupied West Bank city of Nablus on 15 August 2020 (AFP)
By
MEE and agencies

Israeli Prime Minister Benjamin Netanyahu on Monday said a recent deal with the United Arab Emirates did not mean Tel Aviv would relinquish control of large swathes of the occupied West Bank.

His controversial statement comes as Israeli officials are pushing forward with Emirati relations, as an official invitation to Jerusalem was extended to the de facto Emirati head of state, Abu Dhabi Crown Prince Mohammed bin Zayed.

The normalisation agreement, announced on Thursday evening, was brokered by US President Donald Trump and stipulated that Israel would suspend its planned annexation of parts of the West Bank in exchange for diplomatic relations with the UAE.

The announcement has been condemned by Palestinians from across the political spectrum as an act of “treason” and “betrayal”, and triggered a wave of protests in the occupied Palestinian territories to reject the deal.

In an interview published on Monday, Netanyahu told Israel  HaYom newspaper that the agreement did not nullify the provisions of Trump’s contested "deal of the century" plan, which suggests that Israel be granted full control of some 30 percent of the occupied West Bank.

"For the first time in a quarter of a century, we are making peace not on the basis of Israeli concessions and withdrawals, as was the case with Egypt and Jordan," Netanyahu told Israeli journalist Amnon Lord.

"For three years, I worked and did not give up sovereignty. I included it in President Trump's peace plan. According to the American plan, Israel will win 30 percent of Judea and Samaria (the occupied West Bank) - ten times what it was in other plans - without displacing any settlement and territories, which are necessary for Israel's security. This is the American plan. It has not changed."

Settlements and annexation of occupied territories are considered illegal under international law.

Under the agreement with the Emiratis, Israel said it had agreed to suspend the annexation of parts of the occupied West Bank, yet hours later Netanyahu said he remained "committed to annexing parts of the West Bank".

Mohammed bin Zayed (MBZ) said on Thursday that “an agreement was reached to stop further Israeli annexation of Palestinian territories".

"The UAE and Israel also agreed to cooperation and setting a roadmap towards establishing a bilateral relationship," he added in a Twitter statement.

The UAE will become the first Gulf Arab state and the third Arab nation after Egypt and Jordan to have active and overt diplomatic ties with Israel.

Invitation to Jerusalem and direct flights to UAE

Netanyahu wasn't the only Israeli official to make statements on Monday regarding the UAE deal.

President Reuven Rivlin announcement on social media that he had invited bin Zayed to visit Jerusalem.

"I am hopeful that the agreement between our countries will help build and strengthen the trust between us and the peoples of the region, bring economic benefit and regional stability," Rivlin tweeted, saying he had sent an official invitation letter.

Meanwhile, Netanyahu also told reporters at Tel Aviv's Ben-Gurion airport that Israel was preparing for direct flights to the UAE, going through Saudi airspace, as part of the normalisation deal.

However, he gave no time frame for the opening of an air link with the Gulf Arab country.

"We are currently working on enabling direct flights, over Saudi Arabia, between Tel Aviv and Dubai and Abu Dhabi," Netanyahu told reporters, estimating flight time at "about three hours, just like to Rome".

Netanyahu added that he saw "tremendous scope for bilateral tourism and gigantic scope for investment" with the UAE.

A delegation from Israel is expected to travel to the UAE within weeks to work out the modalities of normalised relations, but any swift opening of a commercial air route could be complicated by restrictions due to the coronavirus pandemic.

On Sunday, the UAE opened telephone lines to Israel, a link inaugurated in a conversation between the two countries' foreign ministers.