Incident occurred near UAE emirate of Fujairah, one of world's largest bunkering hubs, which lies just outside Strait of Hormuz 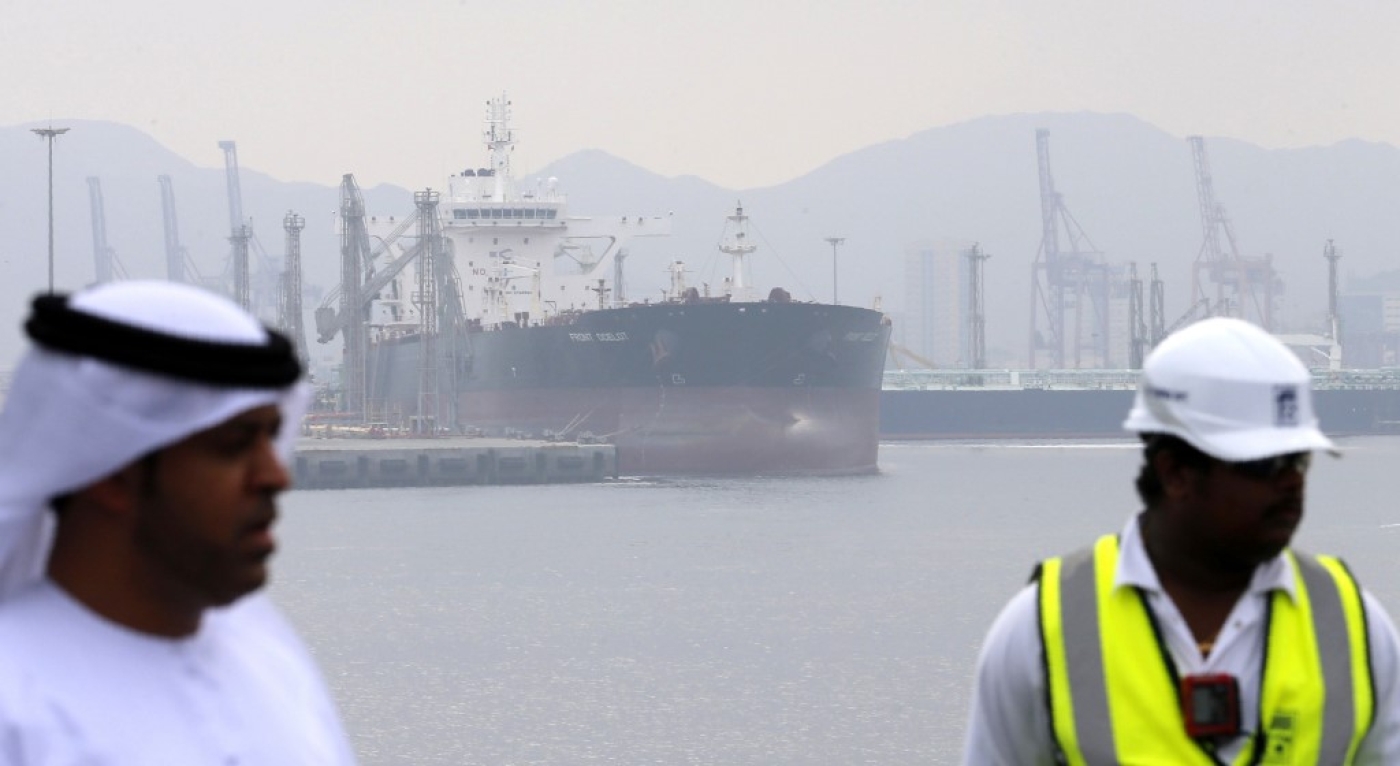 The oil terminal of Fujairah, United Arab Emirates, which can accommodate supertankers (AFP/file photo)
By
MEE and agencies

Saudi Arabia and Iran reacted with "alarm" on Monday after four commercial vessels were targeted by "sabotage operations" near the territorial waters of the United Arab Emirates.

The incident, which caused no casualties, occurred near the emirate of Fujairah, the UAE foreign ministry said on Sunday in a statement tweeted by state news agency WAM.

"Four commercial, civilian trading vessels of various nationalities this morning suffered acts of sabotage" off the UAE's eastern coast, its foreign ministry said in a statement, cited by AFP.

"Subjecting commercial vessels to sabotage operations and threatening the lives of their crew is considered a dangerous development," the ministry statement said.

Fujairah is one of the world's largest bunkering hubs, which lies just outside the Strait of Hormuz. The strait is a vital oil and natural gas corridor for the global energy market. It came as US Secretary of State Mike Pompeo scrapped a planned visit to Moscow to head to Brussels instead for talks with European officials on Iran.

Tehran called for an investigation into the "alarming" attacks and warned of "adventurism" by foreign players to disrupt maritime security.

The United States has already strengthened its military presence in the region, including deploying a number of strategic B-52 bombers in response to alleged Iranian threats.

Saudi Arabia, the Islamic Republic's regional arch-rival, condemned "the acts of sabotage which targeted commercial and civilian vessels near the territorial waters of the United Arab Emirates," a foreign ministry source said.

"This criminal act constitutes a serious threat to the security and safety of maritime navigation and adversely impacts regional and international peace and security," the source added.

Saudi Energy Minister Khalid al-Falih said two tankers suffered "significant damage" but there were no casualties or any oil spill.

"Two Saudi oil tankers were subjected to a sabotage attack in the exclusive economic zone of the United Arab Emirates, off the coast of the Emirate of Fujairah, while on their way to cross into the Arabian Gulf," the SPA state news agency quoted Falih as saying.

The Strait of Hormuz connects the Gulf to the Indian Ocean. Iran is to the north and the UAE and Oman to the south. It is the single most important waterway for global trade in crude oil, with tankers hauling about 17.5 million barrels passing through it daily, Bloomberg News reported. That’s equal to about 40 percent of all the crude traded internationally.

The UAE foreign ministry gave no details about the nature of the sabotage and did not identify the vessels beyond saying they were of various nationalities.

The statement did not say who carried out the operations and made no mention of Iran.

The US Navy's Bahrain-based Fifth Fleet said it was aware of the report when contacted by Reuters, but referred queries to the UAE authorities.

A senior Iranian lawmaker said that the explosions near Fujairah port showed that the security of Gulf states is fragile, Reuters reported.

"The explosions of Fujairah showed that the security of the south of the Persian Gulf is like glass," Heshmatollah Falahatpisheh, head of parliament’s national security committee, wrote on his Twitter account.

The government of Fujairah earlier in a tweet denied media reports about blasts inside the port of Fujairah and said the facility was operating normally.

The statement did not identify the media outlets that published those reports but the Iranian Press TV website cited a Lebanese broadcaster, Mayadeen, saying seven oil tankers were attacked in the port.

The ministry statement also denied any incident had taken place inside the port.

It said the UAE had taken all necessary measures and launched an investigation in coordination with international authorities.

"The international community should carry out its responsibilities to prevent any parties trying to harm maritime security and safety, which would be considered a threat to international safety and security," it added.